Youtube It has always been clear to you that you can make your platform even more intuitive. The company announced some interface changes to make it much more comfortable and manageable.

Likewise, the application owned by Google has also added new functions that many users requested, such as a better implementation of dark mode or improved playback controls. Below TechMarkup brings all the details.

One of the major updates to the new YouTube user interface is the new playback controls. Videos can now be zoomed in to view a specific area of ​​a clip, even while the content is playing.

In addition, the platform will not move the content away when the user stops pinching, as it does for example in Instagram. The video remains at the set zoom at all times.

With the help of the new YouTube update, the ‘Ambient Mode’. This new function consists in that based on the light that comes out of the screen in a dark environment, this effect has been created that intensifies the colors of the platform so that the content draws attention on the display page.

Also, it is now possible move forward or backward in a video with greater precision. To do this, the user just needs to tap on the playbar and swipe up.

The interface shows a miniature series which can be used to search for a specific minute or second. This new Advanced Search is complemented by the possibility of seeing which part of the video is the most repeated among the users who saw it.

In addition to zooming and a new playback control, YouTube has added minor improvements to some UI elements.

For example, him dark mode it is now completely black instead of grayish. On the other hand, the user interface that appears when the video does not play in screen mode complete now has a small slider with clip colors. The same goes for playlist covers. 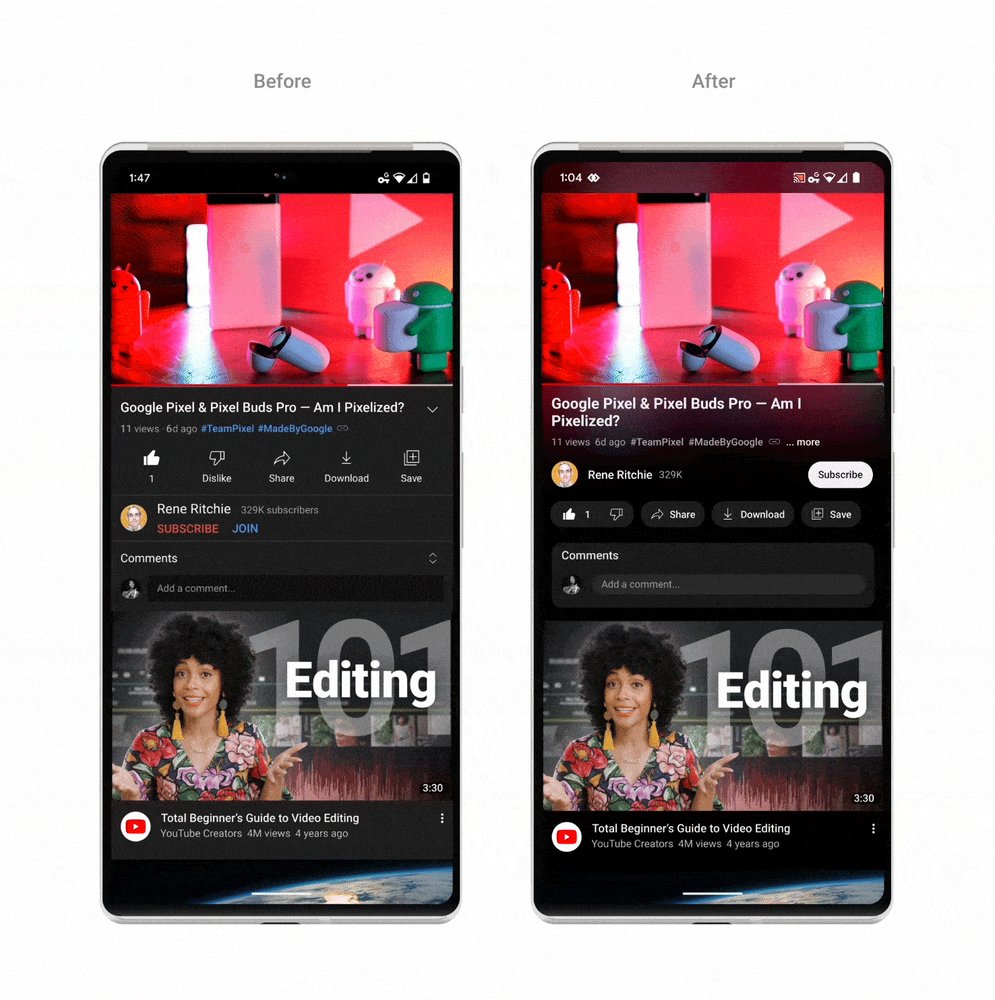 The subscribe button has also been moved and now appears to the right of the username instead of below it.

All these small but important changes will be implemented for all YouTube users today and in case the reader of this note does not have them yet, it must be remembered that these developments are gradual. It should be remembered that the platform also introduces the ability to create user IDwhich will largely replace channel names before the end of the year.

1. Enter YouTube necessarily from a Web navigatoreither in a cell phone either computer.

2. Click on the icon with three dots (or the user’s photo) from the top right.

3. Activate the option ‘Computer view’. In this way, YouTube can now be viewed as if it were accessed from a computer.

The next question is where is the comment history on YouTube. To get to it, you have to press the icon with the three horizontal stripes which is in the upper left.

Once the user enters, it is necessary to scroll to the right, because it is worth remembering that you are in the desktop version, and it does not adapt to the user’s screen. telephone.

There you can see several options about the history, and at the bottom you have the section called ‘Comments’. All that remains is to access it and all the comments that the user has made on the platform will appear in chronological order, whether in their own videos or those of third parties.

House of the Dragon: know what to expect from season 2

The Sausage Party: controversial film will get a spin-off on Prime Video