BeReal is a novel social network that has become an alternative to Instagram thanks to its novel proposal of posting once a day without filters. (Shutterstock)

BeReal is a new social network that has become an alternative to Instagram for a system of notifications that prompts users to post a Photography of the activity they are doing at that moment.

This differentiating factor has attracted Generation Z users who have caused the application to accumulate more than one million downloads on the internet. Play Store. Additionally, with iPhone users it has been identified that BeReal It is the most downloaded social network at the moment in the AppStore.

At the market level, BeReal ranked fourth in the number of downloads in Spain in mid-May and according to information from Apptopia, in a report that compares this social network with other worldwide popular ones such as Instagram and Facebookthe new app has the happiest users with 57 percent positive expressions.

Other markets in which BeReal has gained popularity are Australia, Brazil and France, countries in which Generation Z is the protagonist and they represent 80 percent of the users of iOS devices. The age range includes users from 16 to 24 years of age. A notification system in BeReal warns users to publish a daily photograph of the activity they are doing at that moment. (photo: Twitter)

Once downloaded to the device, BeReal will suggest importing and sync contacts that already have a user to start the formation of a community. Search options by username and by means of urls.

From then on, the application encourages its users to post impromptu photos of their daily activities based on a notification system. The perfect framing, the ideal background and the editing of the images through filters prior to posting are neither required nor encouraged on BeReal.

notifications of this social network are received by all its users at a random time that varies over the days, a function that avoids being predictable and reinforces the idea of improvisation. Once notified, BeReal users have two minutes to take a Photography using the rear camera and another with the front camera of the smartphone.

During this time window it is possible to take several photos in case the result is not the desired one, however, after publication, BeReal users can only repeat the action once. 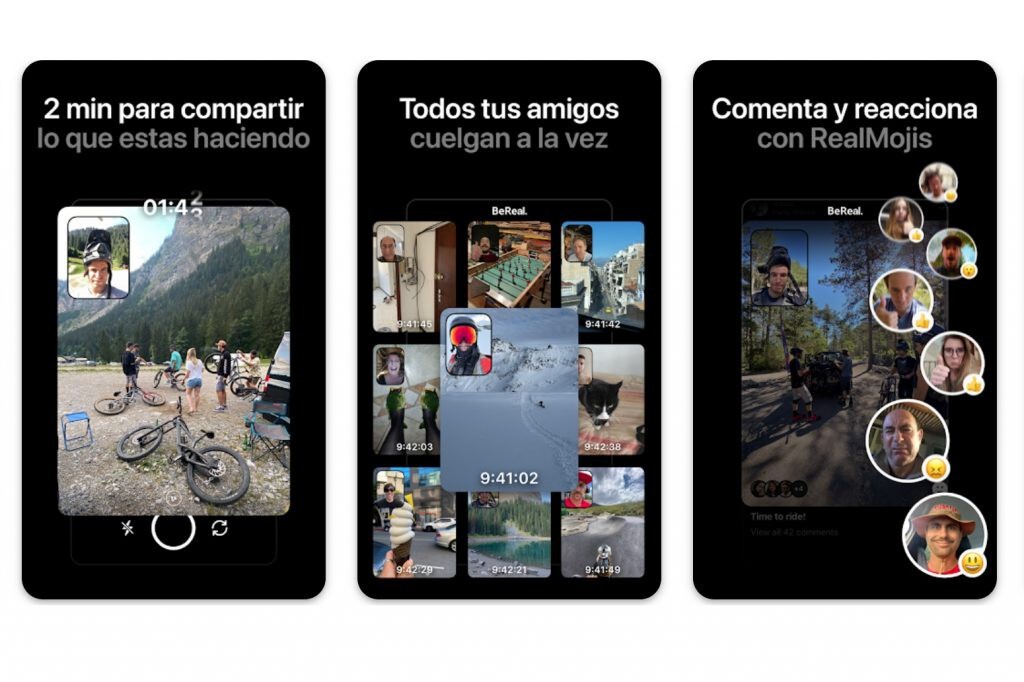 Published photos are only available to the public for a period of 24 hours in which you can receive comments as well as reactions, which are called RealMoji, since they are user selfies.

After this period of time, the image published, as well as comments and reactions they will no longer be visible and will become part of the library of images that BeReal has for its users, called “My Memories”. This record is not public access and is updated monthly.

To see the photos shared by other contacts in the ‘app’, users must previously upload a photo of themselves. In the case of not doing so, they cannot view the images of the rest of the users until after 24 hours of the notification previous.

These photographs are arranged in two sections. The first of them is ‘My Friends’ (‘My friends’), where the images of the contacts. Next to this is ‘Discovery’ (‘Discover’) in which you can also view the photos of other users.

When uploading the daily image, users will be able to choose whether they want to share it exclusively with their contacts or in the ‘Discovery’ section, in view of the other BeReal users.