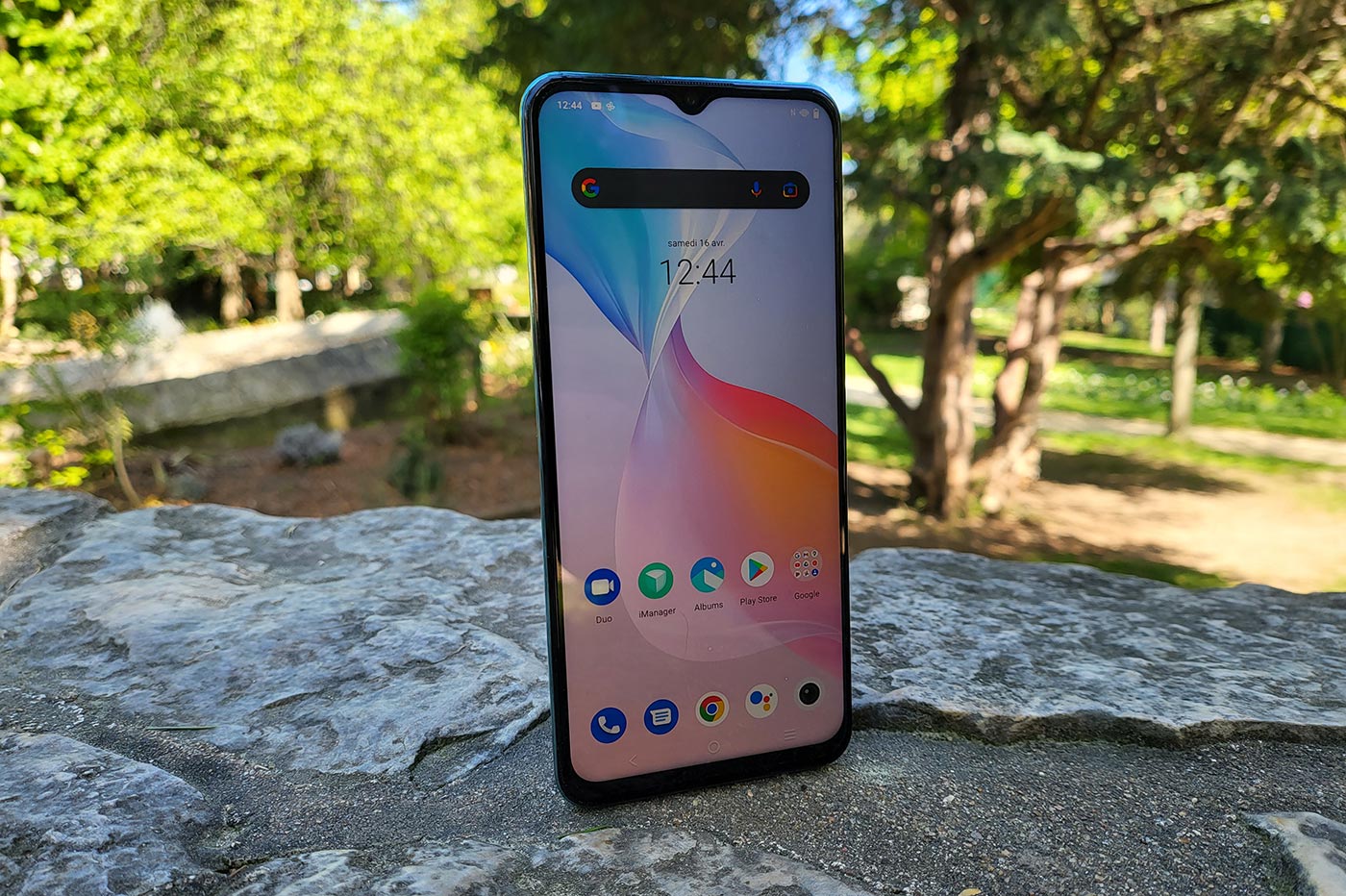 A neat, albeit unremarkable, design

On this pricing plan, we do not necessarily expect the best possible manufacturing quality. The Vivo Y76 5G, like the Y72 before it, therefore does not disappoint by offering a good quality plastic shell, which has the merit of being solid and not catching fingerprints or scratches too easily. Its finishes are good, its buttons click well, and its rounded design still has a bit of charm, especially in this bluish color fashion we are testing.

What changes a bit is that the top and bottom edges are flat, while the left and right edges are rounded. We also find the dual SIM port at the top, on the right the volume keys and an on/off button which also acts as a fingerprint reader, and at the bottom a combo jack, a USB C port and a single grid loud speaker.

At 163.8 x 75 x 7.8mm, the Vivo Y76 5G still has a very slim profile. And at only 175 grams, it gives a certain impression of lightness which is more than appreciable. This feeling is almost cut by its gigantic photo island on the back, with a design that forms two small rectangular steps, with two sensors surrounded by metal rings placed parallel to each other and a smaller, more discreet sensor at the bottom.

Thing is, Vivo isn’t into originality here, and doesn’t quite need it either. If we would have liked it to stand out a bit beyond its color, we can at least underline how it masters its proposal despite everything. It is finally in the integration of the fingerprint sensor on the lock button that it scores a bonus point, its ergonomics are excellent.

The strength of the Vivo Y76 5G is its screen

The Vivo Y76 5G is equipped with a 6.58-inch IPS LCD panel supporting a maximum definition of 2408 by 1080 pixels, i.e. a ratio of 20:9. The screen is slightly cut off at the top by a drop-shaped notch, and surrounded by very slight borders which are far from being visually distracting.

The screen makes an excellent impression on the eye, with well-marked colors that perfectly highlight the content. In the settings, there are three different settings to choose from, but the default setting is perfect right out of the box.

Thanks to it, almost the entire DCI P3 spectrum is covered (96.5%) and the average color temperature is near perfect at 6469K. In short: the colors displayed are those found in nature.

Its small flaw is perhaps its maximum brightness, measured at 424 cd / m², which could be slightly too low for those who are constantly in direct sunlight. Or its contrast, not very marked at 1058:1. But in reality? We are so rarely entitled to such a well-calibrated panel in this price segment that it would be unfair not to highlight it: the screen of the Vivo Y76 5G is a real success. The only downside: a refresh rate of 60 FPS, while mobile gamers now expect 90 or even 120 Hz.

The Vivo Y76 5G packs a MediaTek Dimensity 700 SoC, which isn’t quite the most powerful in its class. It is coupled with 8 GB of LPDDR4X RAM, the classic configuration on the beginning of the mid-range, and a Mali-G57 MP2 GPU. We are not here on the configuration of the titans of the segment, but something sensibly balanced.

And in fact, it shows. The device never really experiences a drop in speed, and remains fluid regardless of use. But at the same time, we can’t help but notice that Funtouch 12, Vivo’s interface on Android 11, is quite… slow. Animations for opening or closing applications, in particular, are long and will somewhat hinder a user who favors speed above all else.

On the raw performance, there are not really any faults to note. If Qualcomm’s Adreno cores are much more famous and supported, the Mali G-57 MP2 still allows you to play Genshin Impact comfortably at Low at 30 FPS, with the possibility of going up to Medium, although some framerate drops will occur. to feel. At the same time, Call of Duty Mobile allows the Medium at 30 FPS very stable. So the Vivo Y76 5G still won’t be serious mobile gamers’ best friend, but casual gamers won’t find anything wrong with it.

The Vivo Y76 5G incorporates a 4100 mAh battery. Given its very thin and light format, it is still a good capacity, although there are many references to highlight 5000 mAh in the mid-range today.

The thing is, its relatively small battery is never really faulted. The device offers excellent autonomy which can easily go up to 2 or even 3 days of use, as long as you have a relatively simple use of your device: internet browsing, social networks, a little photo and that’s it. It’s when you start to really use it at full power, on a 3D game for example, that it will end up melting like a classic smartphone.

Note that the Vivo Y76 5G is compatible with fast charging at 44W, the charging block of which is supplied directly in the box of the device. Thanks to it, we were able to recover 63% of the battery in just 30 minutes, from 16% to 79% precisely. A very good feature to have for a device at this price.

If the Vivo Y76 5G does display three sensors on its back, they are not quite used as most other smartphones do. Right here, the 50-megapixel main sensor is the star of the show, and the other two 2-megapixel depth and macro sensors are mostly used to enhance its capabilities. At least, on paper, since in fact… They are rare.

This does not mean that the photo configuration is bad, far from it. In the middle of the day, it even allows you to take excellent photos with beautiful color dynamics and good management of high and low lights. If the smartphone tends to push the contrast of its captures a little, we don’t blame it too much for the beautiful end result. The x2 zoom offered by the interface does what it should, although it cuts into the 50 megapixels offered by the main sensor for this. The rendering is sometimes different between the two zoom levels, but this is particularly due to the photo algorithm used by Vivo.

It can be observed particularly in low light and at night: the algorithm pushes the knobs very often. We can see that the photo is smoothed and reworked artificially more than once to achieve a result without too much noise. All smartphones do, but not at this level of intensity. This is a choice that harms the details of the shots taken, but which makes the general shot very readable. Everything will depend on the tastes of each therefore, even if this level of digital editing also brings very successful shots in portrait mode.

The 16-megapixel front photo sensor is pretty standard. Less taken up by digital editing than the rear sensors, it also causes a more noisy result in low light and at night… but also more natural. For selfies, it seems the least you can do, especially since the interface adds a rather effective “flash” by pushing the screen brightness to the limit and passing the interface to white. Why not after all ?

The presence of a combo jack port is to be welcomed as most manufacturers have now abandoned it. But that’s about all. Vivo Y76 5G’s single speaker can’t work miracles on its own, and its quality leaves something to be desired. Forget the bass, when the highs aren’t very well defined and the mids are passable at best.

You have to make some sacrifices to successfully contain the price of the phone. On this Vivo Y76 5G, it’s quite simple: it’s the audio that took the sentence. Especially since the placement at the bottom right of the main speaker makes it very easy to block it with the palm of your hand in landscape mode. We will come back, even if the manufacturer is pleased to integrate a rather good quality helmet in the box of the device.

The Vivo Y76 5G is in a pretty interesting spot on the early mid-range. He doesn’t try to put the small dishes in the big ones, or to hide his shortcomings by making a lot of noise. On the contrary, it seems to target precisely one type of user and does it very well: the average user. Anyone who hasn’t yet fully understood why the Hz of a screen is interesting, nor even tried to really play on their smartphone beyond a Candy Crush that would run on a coffee maker.

Nope, the Vivo Y76 5G proposal is very simple : a superb screen, an excellent autonomy, and a sensor which will be able to emphasize the photos of holidays. Its biggest weakness is above all its main speaker in mono, really below the rest of the proposal, and its Funtouch interface which deserves to be a bit optimized. Out of that, we have a beautiful device that will suit everyone, without frills.