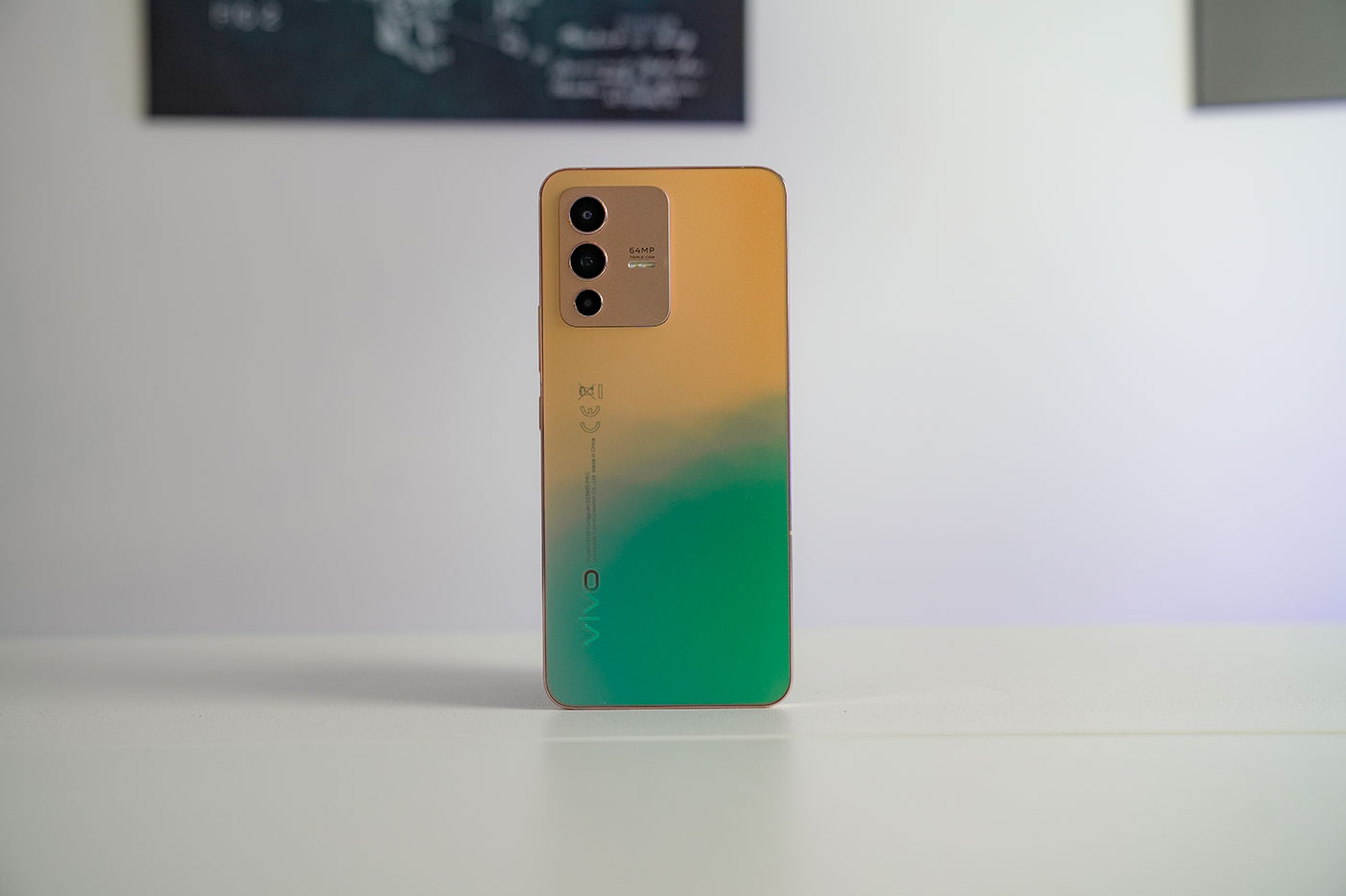 Today, it has become very difficult for smartphone manufacturers to stand out. All our phones look alike: a borderless screen, a rectangular case, a glass or plastic back. They all come out of the same mold, even if we sometimes have nice surprises like the folding screen of the Galaxy Fold , but also the ceramic back of the Find X5 Pro .

Vivo, for its part, had an idea to stand out. Produce a phone capable of changing color. This is the V23 5G. But rest assured, this feature is not its only asset.

An original look, but that’s not everything

Overall, the Vivo V23 5G looks like any smartphone. A screen with contained borders, a rectangular format, it aligns with most of its competitors while offering two or three little things of its own.
For starters, there’s its screen. Or rather its notch. Placed at the very top of the slab, it includes no less than two sensors. Sensors which are coupled to two LED flashes placed at the level of the upper border and on which we will come back in more detail a little later.
Then, it is impossible not to mention its setting. The Vivo V23 5G has flat edges, exactly like what iPhones or devices like the Reno 6 offer.
But that is of course the third most important point. The back of the device is made of glass, but also a layer of fluorine. Why did you use this material? Simply to allow the phone to change color. It will therefore change from a beautiful gold to a turquoise blue depending on the ambient light. The fluorite layer will indeed be UV reactive. And by placing shapes or leaves on the back of the phone, it will suddenly be possible to personalize its look.
At least for a while. The state change takes approximately three minutes. Your creations will therefore be ephemeral.
This feature is very impressive and we have a lot of fun customizing the phone. At least at the start. After a few days, we end up not touching it anymore. That said, it’s not a gimmicky function either. Because the phone will continue to change color with the light, which also means that you will never really have the same device throughout the day.
Note also that this change of state will also work with transparent silicone shells since these allow ultraviolet light to pass through. It will therefore be quite possible to protect the Vivo V23 5G while taking advantage of this color change induced by fluorine. And if you don’t like golden telephones, you can always turn to the black model… which, on the other hand, will skip fluorine.
The rest of the proposal is pretty basic. Three buttons placed on the right side, a hatch capable of accommodating two Nano SIM cards at the bottom and above all a single and unique speaker placed at the level of the lower edge. A loud speaker that is sadly lacking in bass, unfortunately.

Indoors or on an overcast day, no problem. The panel is precise and it is bright enough to allow us to enjoy our games, our films or our series. We even take pleasure in launching Netflix on it.

Unfortunately, the situation gets complicated very quickly outdoors, and in good weather. In bright light, the screen becomes a little less readable , especially when wearing sunglasses. Blame it on too low brightness.

It’s a shame, especially since this slab does not lack qualities. Beyond the outline of technologies mentioned above, it is indeed capable of restoring a wide variety of colors. And we will even have the choice between several profiles to stick to our desires. Moreover, you can also take control of the temperature of the screen.

SoCs produced by MediaTek have sometimes suffered from a bad reputation. Certain generations indeed posed problems, in particular for all that relates to the release of heat. But fortunately, the Vivo V23 5G is not affected.

While it obviously won’t match an Oppo Find X5 Pro or even an iPhone 13, its Dimensity 920 will still be enough to calmly face everyday life. And not that, by the way. The V23 also performs in game, even on very fast 3D titles like the essential Call of Duty Mobile. And with its 90 Hz screen, we will of course gain in fluidity.

The heating, for its part, remains correct. The Dimensity 920 will heat up a bit over long gaming sessions, but it will fare better than older Mediatek chips.

Battery life is average. The 4,200 mAh battery on board the V23 will allow it to last a day, hardly more. And if you play a lot, then you might even charge it before going to bed. Good point on the other hand, Vivo was not stingy and the device supports 44W, with a full charge in less than an hour.

No wireless charging, however, which is not really surprising for a phone offered in this segment.

A suitable photo shutter, with a touch of originality

If you are looking for an effective and inexpensive camera phone, then the V23 will probably not be the best choice. It will be better to turn to a Pixel 5 , for example, the price of which has come down significantly since last year. That said, Vivo still made some interesting choices.

At the rear, there are three sensors. The main sensor reaches 64 million pixels of definition and it is coupled with a wide angle opening at f / 1.89. Wide angle which is clearly not the brightest on the market.

To accompany it, we will find a second sensor of 8 million pixels, a sensor coupled this time to an ultra wide angle opening at f / 2.2

The third and last sensor does not exceed 2 million pixels and it will only be used for macro, with an aperture set at f/2.4.

Without the slightest surprise, the V23 5G ignores the zoom. The opposite would have been surprising in this segment.

By day, the V23 manages to produce decent quality images. The sharpness is present and the colors are rather natural. What sins, however, is the dynamics. Even on the main sensor, it remains limited. The shadows are often blocked and the device is very sensitive to glare and backlighting.

Focusing is both fast and precise. We will also appreciate the very soft and natural side of the background blurs. Blurs that make it possible to bring out the subjects.

Indoors, the Vivo V23 still manages to surprise. The quality drops a little, but not as much as one might have feared. So of course, it will be preferable to shoot in night mode when the light conditions become very complicated, but we can still obtain correct results freehand.

The V23 ignores the zoom. When you go to find your subject, you will therefore switch to digital magnification. And as much to warn you, once the milestone of 2x has been crossed, the quality will drop drastically. Even in bright light. Even in good weather. Indoors, it will be even worse and you will then have every interest in staying on the wide angle.

I wasn’t expecting anything special about the portraits. Normally, mid-range smartphones do not shine in this exercise. And yet, the V23 surprised me. In the correct meaning of the term. With enough light, it will indeed be able to produce very good quality images. Images with surprising sharpness and very natural bokeh. Bokeh that you can modify in post production and through the gallery.

Nothing to say about the cutting. It is precise and it does not fall off. So of course, the device will sometimes forget a tuft or two of hair, but that remains within the realm of reason.

Vivo has taken the utmost care with the selfies component. At the front, we will indeed find no less than two sensors. The first reaches 50 mpx and it is coupled with a wide angle. The second goes down to 8 million pixels, but it offers another focal length pulling towards the ultra wide angle. It will therefore be possible to modify the framing on the fly.

But above all, we can also count on two LED lamps placed at the level of the upper edge. Lamps whose temperature we can modify directly from the app. A flexibility that the V23 is the only one to offer on the market today.

The results, however, are somewhat mixed. If this temperature system is well thought out and makes it possible to modify the atmosphere of our photos as soon as the shot is taken, the Vivo V23 will have difficulty in maintaining correct sharpness. The textures will sometimes be a little imprecise, the same for the contours. I honestly expected better from that side. Especially after that incredible portrait mode.

Vivo has put a lot of emphasis on the photo, but the V23 will also be able to get good quality videos. This will keep a beautiful sharpness and natural colors. The stabilization will be a little perfectible on the other hand and it will be better to invest in a gimbal to improve your plans.

A pleasant and effective overlay

The Vivo V23 5G comes on the latest version of FuntouchOS, the home platform. A very pleasant, very complete platform… and based on Android 12.

First and not least, the visuals. They are clear, but also consistent from screen to screen. This contributes a lot to the feeling of standardization that emerges from the interface. Whether you go to the notification center, in the settings menu or even in the applications screen, you feel a real consistency and that’s a very good thing.

Especially since behind, Vivo has also taken the greatest care in navigation. FuntouchOS thus offers additional gestures. A three-finger vertical swipe from the top of the screen will allow you to take a snip. Reverse gesture from an app will activate split view. And if you want, you can even minimize an application into a small flyout window.

All the usual tools are present. It will be possible to customize the interface of the platform with the themes, but also to manage its time of use with the well-being options. And if you want to go further, you can also customize the look of all the animations.

In terms of performance, everything is fine. The Vivo V23 5G remained responsive during these two weeks of testing and there was no slowdown.

Our opinion on the Vivo V23 5G

The Vivo V23 5G is a somewhat different product. Very original in its design, it is also formidable in selfies while offering more than correct performance as a bonus.

So of course, it doesn’t have the most beautiful panel on the market, nor even the most powerful SoC or the most flexible photo module, but it does offer some pretty things and it should particularly interest selfie lovers. Only downside is its price. With an entry ticket set at €529, it is indeed more expensive than the small Galaxy A53, offered for its part at €459. A price difference that risks playing against the product.