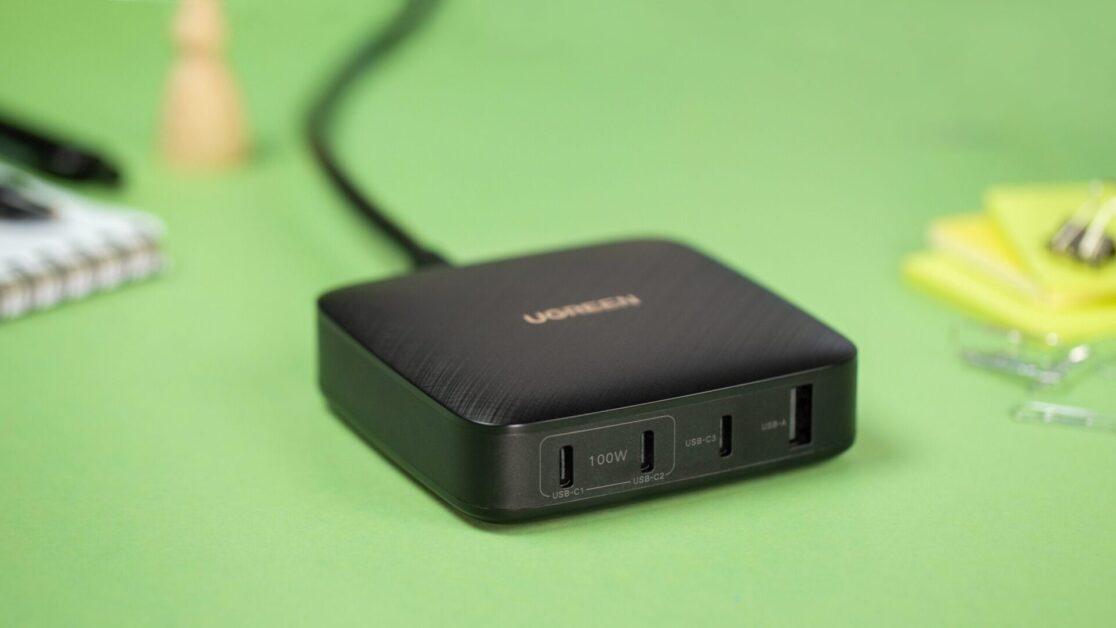 Ugreen is a specialist in everything to do with charging – from power adapters to power banks. We tested the USB-C chargers with 100, 66, and 20 watts for you. You can read how the power supplies perform in practice in the TechMarkup test.

Power adapters are like teeth: you don’t worry about them until the originals are gone. Repurchasing the original connector can also be an expensive pleasure. But at least for chargers, there are also third-party solutions that combine several options in one device. Ugreen is one of the providers who offer a whole range of charging solutions – and TechMarkup has looked at them for you.

Disclaimer: Ugreen provided us with the 66-watt and 20-watt chargers free of charge for this test. Ugreen also supports us financially with a small amount in the creation of the text. However, neither had any influence on this test.

You’re probably wondering: Can power adapters be sexy? Probably not, one would say. Nevertheless, a few weeks ago I privately ordered a 100 watt four-port charger from Ugreen after reading the French test report by my colleague Antoine and felt a kind of “have-will” feeling.

To cut a long story short: after my colleague Antoine’s test was good, I ordered the Ugreen charger. I haven’t regretted it for a day! If I can, I will charge with the original accessories. When traveling or in the office, however, I only use this device, which has never let me down in the three months. Ugreen asked us to take a look at other of their products. Based on my good experiences so far, we would like to do that:

When Ugreen asked us a few weeks ago if we might not want to test their 100 watt charger and the device then snowed in our editorial office, I was immediately curious: A charging hub that can hold up to three USB-C devices and one Simultaneously charging with USB-A is in itself something I may need.

I am always on the go with my MacBook – whether between home and office or when traveling. If I don’t want to block the few USB ports on my notebook, I need a whole stack of chargers – for the MacBook itself, of course, but also for the iPhone and iPad. My hope was to gain a lot of space with the 100 watt charger. And that works: The charger is just as big as the original Apple power supply for my MacBook, but it has four ports.

It was the first thing that caught my eye: The design of the 100 watt Ugreen charger is of high quality! The plastic is matt black and has a rough surface. Overall, it looks very valuable, which probably has something to do with the weight of the device. This is pleasantly difficult – you have the feeling of holding something neat in your hand.

The heat development is as expected with the Ugreen charger: For example, if only an Apple Watch is attached to it, the power supply unit remains at room temperature. If, on the other hand, you plug in several devices, and especially a notebook for charging, it gets correspondingly warm. However, it never gets so hot that you have to worry that it will break or the surface on which the device is placed could be damaged by the high temperature. That sounds a bit drastic, but I can think of examples where it was exactly the same.

Everything on board that a charging hub needs to have

When it comes to charging standards, the 100-watt charger offers the full range: Power Delivery 3.0 is also on board, as is the Qualcomm standard Quick Charge up to version 4.0+. In addition, PPS ensures an intelligent adjustment of the charging current and voltage, which improves the efficiency and thus has a positive effect on the service life of the battery. Users of Samsung smartphones can look forward to support for the in-house AFC technology for regulating the charging power, for Huawei and Honor users there is the equivalent SCP. AFC and SCP are each supported on USB ports 3 and 4, Power Delivery is available on ports 1 and 2.

A free Xiaomi 11 Lite 5G NE with a mobile plan, this is the new shocking RED by SFR offer

The following table shows you the maximum charging power at a glance if you use several ports at the same time.

The Ugreen charger with 66 watts is something like the little sister of the 100 watt power pack – and has inherited its good looks and quality from it. The black, corrugated plastic looks high-quality and everything is solidly built. Nothing wobbles, the plastic cannot be dented. And because it’s cold season: the case is slightly smaller than a pack of Tempo tissues.

Otherwise, the quality is what you would expect from a top device: high quality! We used several cables to test how it feels to be plugged in and whether the cables can be moved. With all cables there was only a little play, if at all.

As the name suggests, the Ugreen charger charges smartphones, tablets and notebooks with up to 66 watts. The standards Power Delivery 3.0 and Quick Charge up to 4.0+ are supported. PPS optimizes the charging current and voltage during charging. This increases the efficiency, reduces the temperature development and ultimately saves the battery. If two devices are plugged in at the same time, the Ugreen Charger charges at port 1 with a maximum of 45 watts, with 20 watts remaining for the second port.

When charging smaller devices such as smartphones or smartwatches, there is little or no noticeable heat development with this device. If you charge a tablet or even a notebook with this power plug, the temperature rises accordingly and the plastic becomes warm. However, this is in the absolutely normal range and comparable to the heat generated by an original power supply unit.

Fast charging even faster in the test

In the test, we charged an Oppo Find X3 Pro, a Samsung S21 Ultra and a MacBook Pro 13 “with the charger. In the test, the notebook was even charged a little faster than the manufacturer had promised: the battery level reached 25% in just under 20 minutes, according to 37.3 minutes half and after 1:40 hours 100 percent.

The Galaxy S21 Ultra supports Power Delivery 3.0 with a maximum of 45 watts – the battery was 50 percent after 24 minutes and fully charged after 58 minutes. The Oppo Find X3 Pro can be charged with 65 watts, but only via the proprietary SuperVOOC charging turbo – with Power Delivery a maximum of 18 watts is possible. Accordingly, the entire charging process took a good one and a half hours.

The design of the Ugreen charging plugs is reminiscent of the original parts from larger, well-known manufacturers. The plastic is high quality and shiny, the shape, as I said, is reminiscent of other brands. Although the plastic does not have a rough surface, no visible fingerprints can be found.

The USB-C charging slots take the cables well and there is no play after plugging in. The heat development is common as with other comparable devices. The plug gets lukewarm, so to speak, without ever getting hot.

Charger ideal for smartphones and tablets

With a charging power of 20 watts, the Ugreen mini power adapter is aimed at smartphones and tablets. Thanks to the Power Delivery 3.0 and Quick Charge 4.0, 3.0 and 2.0 standards, the most important open standards are on board. As with the larger Ugreen chargers, PPS is also on board here to optimize current and voltage during the charging process. This improves the efficiency and thereby reduces heat generation and battery wear.

In the test, we charged both an Apple iPhone 13 Pro and a real Android curiosity with the Ugreen Mini: the LG Wing. The iPhone 13 Pro consumes up to 20 watts via Power Delivery 3.0 according to the official specification – and the charger also puts that on the road. After just 10 minutes, 25 percent capacity is reached. After 22 minutes the battery is half full, after 71 minutes it is completely full. The situation is similar with the LG Wing, which relies on Quick Charge 4.0. The first quarter is refueled after 13 minutes, and half after 26.5 minutes. The complete charging process ultimately takes one and a half hours.

Conclusion: great chargers, but fast charging not compatible with all smartphones

If you are interested in a Ugreen power supply, then you should definitely take a look at the datasheet of your smartphone beforehand. The manufacturers from the BBK Group, in particular, can only achieve the advertised high charging capacities through their proprietary standards, which are not supported by third-party manufacturers. You can bring the 20 watts of the Ugreen Mini to the street with the vast majority of smartphones. The 66 or 100 watts of the large Ugreen power supply units can usually only be achieved with notebooks – or combined if you charge several devices at the same time.

In the test, the Ugreen power adapters convinced us on the one hand with their high-quality workmanship and pleasant materials, but at the same time also fully met the charging performance promised by the manufacturer. Thumbs up!