Twitter is in the middle of a transition stage in which end-to-end encryption would be included in direct messages as a form of user protection.

Jane Manchun Wong, an application researcher and constant leaker of information, she found indications of this function in the code of what would be the latest version of the platform for devices with the Android operating system.

Before its publication, Elon Musk He responded with a wink in what would be a way of endorsing that development, although there is no official confirmation.

For now there are not many more details on how or when this tool would reach the social network, because if it were integrated it would be an important alternative to take care of the privacy of users in direct messages, since the information shared there will be saved in the chat and only the two people involved will have access to the written and multimedia content that is shared, so neither Twitter will be able to read it. 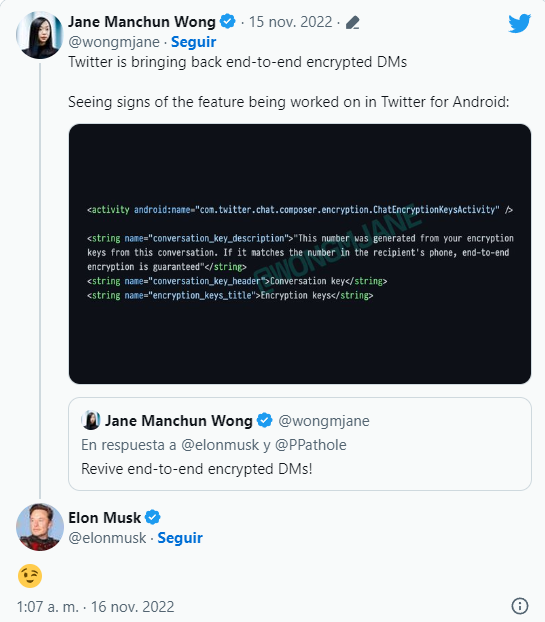 The encryption was close to the app

This is not the first time that the app has tried to include this feature, which is common in messaging platforms like WhatsApp and Telegram. In 2018, Twitter was also developing this tool, but in the end it did not consolidate it and it is not known why.

Wong was also the one who unveiled the details four years ago, showing screenshots of how it was being planned, as it would allow users to choose whether or not to enable this tool through settings.

In the last two weeks, since the arrival of musk, the application has been on a constant list of speculations for modifications that will be added to improve the user experience.

Among these options is the elimination of the message that indicates where a tweet has been published from and changes in the icons, in addition to speculation that would be in development such as the possibility of publishing longer tweets, charging to see certain videos and expanding the options of message editing.

But these did not cause as much controversy as the two most recent ones related to verifications, because in order to improve the company’s income, the decision was made to launch Twitter Blue, which is a premium service with certain benefits.

One of the added values ​​of this plan was the possibility of having the blue icon that verified the account to guarantee that this profile was paying for the subscription, but some users took it the other way and began to modify their accounts posing as personalities or companies generating false content to deceive other people. finally decided to stop Twitter Bluewhich is disabled for now.

In parallel, the gray verification was launched, which sought to make the accounts of companies, governments, the media and personalities official. This came out of nowhere and nobody understood its real reason, so it was downloaded the same day it was released to explain to people why a second icon is available again.

We have the exact launch date of Oppo Reno9