At the beginning of the current pandemic, the common denominator since 2020 was confinement at home, a fact that marked the ‘boom’ of streaming platforms such as Twitch, or of social networks like TikTok. Streamer or tiktoker were two words that became popular and at the same time, they became a role or a credit for those who put on the 10 and began to generate content.

In fact, the tool that shows users the historical evolution of the popularity of search trends, Google Trendsrecords an exponential increase in searches related to Twitch and TikTok topics since the first week of March 2020, during the beginning of the covid-19 pandemic.

The constant search for entertainment prompted young people and adults of all ages to discover and bet on the world of content creators, those who entertain their communities with video games, dances and skits; But perhaps, a golden opportunity that came with this digital evolution was for professionals from all over the world, as they reinvented themselves and took advantage of these new spaces, which were growing in popularity, to be able to work and have fun at the same time.

TechMarkup spoke with three of them, Guillermo ‘Guillo’ Arango from Colombia, Marcela Figueroa from Mexico and Gerard Romero, from Spain; and these are their experiences after the evolution of social networks.

Guillermo Arango: “It has been a path of continuous learning”

The idea of ​​creating content came to him in mid-2020, during the pandemic. Guillermo Arango, who works in the program En la Jugada of the Colombian media RCN, He decided to open a YouTube channel called Guillo Arango, at the suggestion of his wife who works in social networks. The tik tok account of the same name came later.

According to Guillermo, he was motivated by his interest in expressing his opinion, talking about football history and statistics. However, his more than 10 years of experience as a sports journalist did not translate into knowledge of the platforms. In these spaces, he started from scratch.

“It was a continuous learning. Day by day one learns how to use different tools to be able to further enhance these channels. (YouTube and TikTok)”, he told TechMarkup. Now the Colombian journalist, who recorded and edited his YouTube videos from then until a few days ago, decided to hire a person to help him speed up the production of your content.

However, at least on TikTok, the content that is posted is produced by himself and edited from within the app. The 100 facts towards the World Cup, for example, is content that he is currently working on on the platform that he initially related to dances and jokes. “I felt that formality was difficult to apply in this social network, but it can be done with certain touches.”

Currently, the Colombian journalist feels that he is still starting and that the support of his wife is important to learn more about the platforms on which he finds himself. At least in his case, Instagram and Twitter are not only his strengths but they have also been windows that he has known how to exploit with sponsorships.

Marcela Figueroa: “it is more beautiful and genuine to be transparent with the followers”

Known by her fan base as “Juegodedoce”, “La de La Gambeta” or simply “Marce”. Marcela Figueroa he is not a sports journalistbut she is a communicator and works in a digital sports medium called La Gambeta, along with other Mexican content creators like her.

She is a fan of Real Madrid and she does not hide it, in fact, it is something that differentiates her from many journalists because a large part of them do not like to reveal that information.

“The name of the channel (game of twelve) was born because the fan is known as ‘number 12’ and I wanted to tell things from that point of view,” Marcela told TechMarkup. “I think it’s nicer and more genuine to be transparent with the fans. I think they have accepted it very well.”

It is precisely her fan base that led Marcela, who opened her account in TikTok in 2020, to venture as a content creator where she works. “It is the medium that has helped us because it gives a certain approach to the public. You say ‘I think I’ve seen it somewhere’ and you feel the connection because that’s how it is”.

Although she is a well-known content creator in Mexico, Marcela did not start on the platform knowing much about it, but like Guillermo, learned along the way and seeks to continue doing so.

“Now I am more involved in learning more about how the social networkshow can I monetize my content, how can I reach more people?

Regarding her goals on platforms such as TikTok and YouTube, she admits that she considers that she is a bit “stuck” but wants to demand more of herself. “I have in mind to take my content much further. The World Cup is coming up and I hope to be there”.

Gerard Romero: “people look for us because they like what we do”

The case of the sports journalist specializing in FC Barcelona news, Gerald Romero, is the most unique. He took a risk and left behind a stable job in which he developed for fourteen years to start in the world of streaming in Twitch with JijantesFCan information and entertainment platform for football fans and those who are not looking for it, but who appear as recommended and stay.

“I think that in the end I show myself with more freedom, without fear,” Romero tells TechMarkup. “People come looking for us because they like what we do and because it is a combination of being natural, with music and a party to hook the public”. 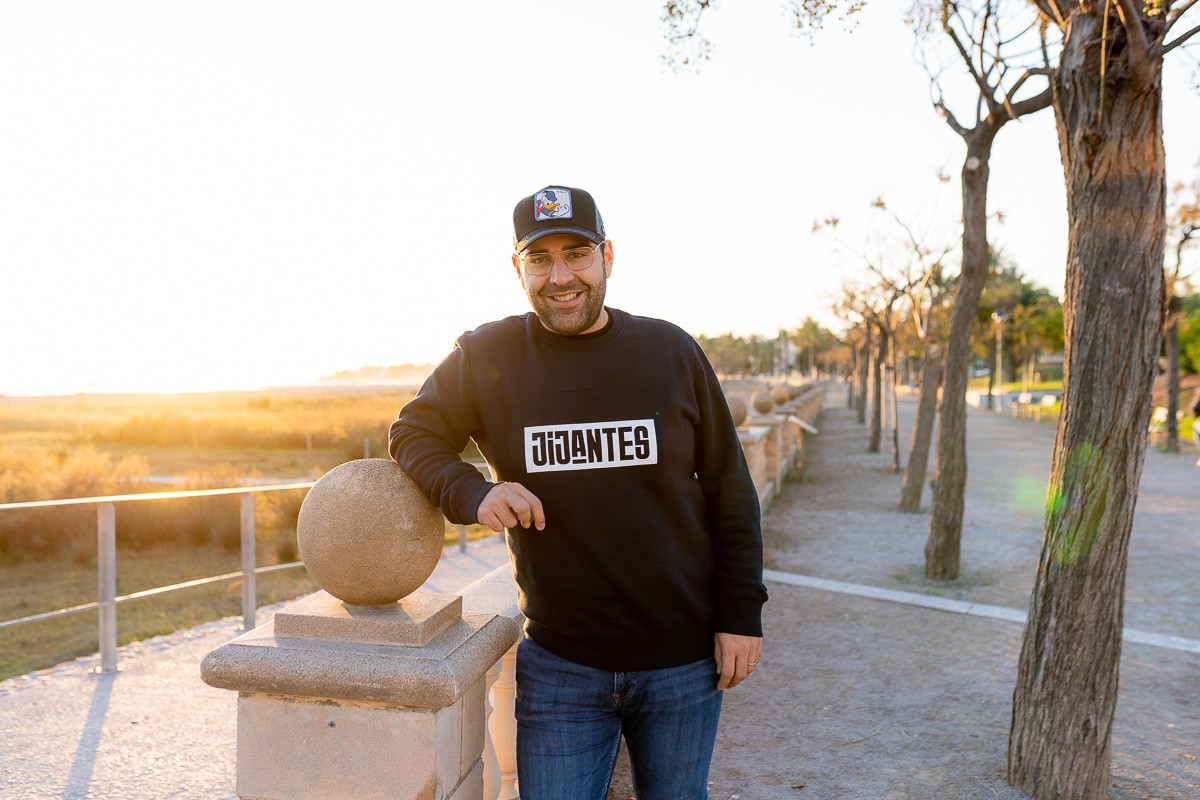 Romero does not start as the creator of JijantesFC. The initial idea, which emerged at the end of 2020, was called Romero Sports and it was not on Twitch but on YouTube; there he did interviews and you could see some funny elements that now characterize the journalist’s program on the streaming platform.

Over time, gerard learned to function in front of the camera, something foreign to his experience in radio; to interact with the chat and its conversations; and to thank with dances, called ‘hakas’, the donations of followers who want to support him in the creation of more content.

“We saw that this was working and we made (along with his partner) the decision to test how good we were at Twitch, people gave us their support and here we are,” said Gerard, who added that his partner also left his job to support him. in the project of Jijantes FC after nine months on the platform.

Perhaps the most viral clip of Gerard in Twitter be that of one interview he did with Luis Suarez, striker for the Uruguayan national team and former FC Barcelona player. In the video, the journalist interrupts his conversation with the soccer player to do a ‘haka’ in gratitude for a donation before a look of astonishment from Suárez.

“What there is often is ignorance on the part of people who work in conventional media who do not understand what this platform is, what a chat implies, a subscription. In my case, it is the bread that I have to eat. We say thank you with a ‘haka’ or by ringing a bell,” she says.

Jijantes FC is Gerard’s way of showing his audience, with which he laughs and plays, how it is that a first in the Sports journalism in a dynamic more similar to that of a newsroom, but without losing sight of the objective of entertaining the audience that chooses it to spend the afternoon.

For now, Romero’s project is progressing slowly but surely with a view to a clear future. “I would love to be able to do more, expand the programming, but we have to go little by little. We have to evaluate… We are going to follow the FC Barcelona games, we have the Champions League and we will add some things”, he concluded.

Thus, it can be seen that digital platforms continue to evolve and with them the independence of many to make their own content, together with the freedom to show their personality without shame. According to the TwitchTracker website, a page dedicated to collecting statistics on Twitch, in July 2022 alone there were more than 8 million live streamers, an amount that contrasts with that registered at the end of 2019, since only in December of that year there were 3.3 million creators.