For several years, brands have sought ways to consolidate this technology in the market.

Screens are a fundamental part of daily life, but they have always been in environments such as television, movies, cell phones, computers, where they seem normal. But how about taking them to less objects in different places, like clothes or a sofa.

For several years this technology has been developed, which for now has been integrated into mobile devices, but not into those products that are outside the technological environment. Which is not to say that there hasn’t been progress in making it a reality.

In 2009, the work of a group of researchers from the University of Tokyo, who created lampshades that could be rolled up to integrate into T-shirts and a sofa. This project was designed from organic light emitting diodes, OLEDs, and some organic transistors with a new type of elastic conductor.

This allowed the display to be placed in a curved location without affecting its performance, giving it the option to bend and wrinkle without causing any damage. Which gives the possibility of covering objects in three dimensions and moving at the same time.

Other benefits of this type of device would be the possibility of manufacturing artificial skin for robots or body parts that serve as prostheses, since instead of using OLEDs, pressure sensors would be used on the printed conductive material. As well as creating medical implants to study and repair the organs of the body. 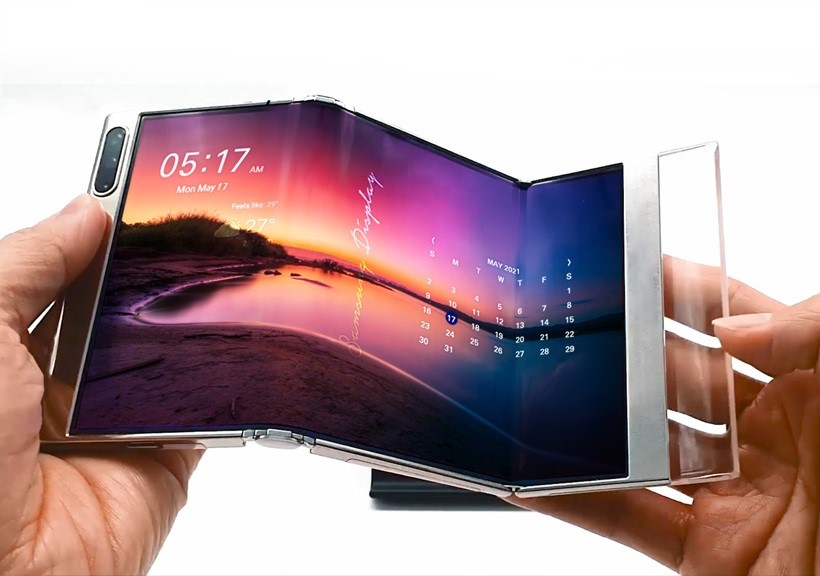 advances in this technology.

Time later, in 2019, during the Mobile World Congress Barcelona there was a large space to talk about the developments that had been achieved up to that moment.

Various brands unveiled various use cases, such as a t-shirt, a hat, and a bag with a screen in the middle to display different types of content. The technology they use is AMOLED with 8-inch panels, 2K resolution in 4:3 format and a thickness of 0.01 millimeters, which had the ability to bend to fit the surface.

This project led to the proposal of devices such as a roll-up keyboard, a landline telephone with a flexible screen, a steering wheel for a car, and a loudspeaker.

All this with one factor in common: expensive technology. During the 2019 event it became clear that this type of screen is intended as a differential factor in design and use, but that it has a high integration cost and is therefore difficult to put on the market, as has happened with folding phones. . For several years, brands have sought ways to consolidate this technology in the market.

To all this panorama was recently added LG with a proposal that even allows you to extend the size of the panel. The screen of the South Korean brand is 12 inches, but it has the possibility of expanding to 14 inches by stretching.

The use cases the company mentions are uneven surfaces such as rescuers’ clothing, where messages could be posted during emergency situations that would aid communication.

For its construction, the base substrate material was used from a silicon similar to that used in contact lenses, it also has micro-LEDs of less than 40 micrometers to be the light source, giving good resolution and durability. . To be flexible, the brand used spring-shaped circuits.

This as part of a project that started in 2020 and is expected to end in 2024, seeking to go beyond clothing and that can be included in cars and planes.

House of the Dragon: the craziest theories about the series

Supernatural: 10 questions about Dean that were left at the end of the series