with the festivities of Christmas and New Year just a few days away, the applications of streaming musicals like Spotify, Deezer Y Apple Music They have generated their own playlists so that users can experience the Christmas hits that set the mood for celebrations with family and friends.

Although Christmas carols are a classic every December, these music charts are not just limited to them, but include songs modern with festive motifs. The clearest example of this is the song “All I Want For Christmas Is You” by Mariah Careywhich despite being launched in 1994, is a worldwide trend between November, when the Christmas season begins, and December. 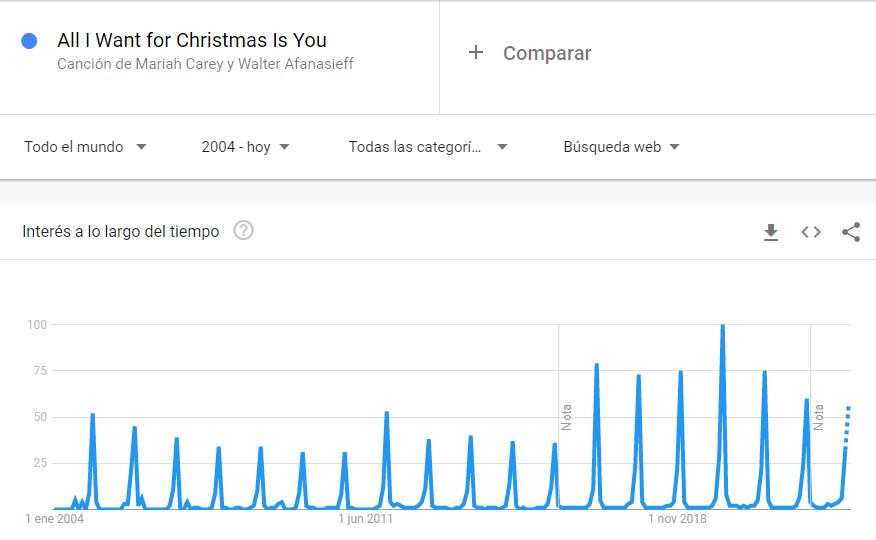 The song “All I Want For Christmas Is You” by Mariah Carey is trending worldwide every year according to Google Trends data. (Capture)

This custom among users of Internet can be checked with the data analysis tool Google Trends, which collects information from searches on the web page. According to statistics, available from the 2004 Until today, the title of this song has its maximum peaks every year during these times.

The most successful playlists in streaming applications

One of the playlists music christmas in Spotify It’s called Christmas Classics, with almost 3 million likes and a total of 73 songs that make up a playback time of more than 3 hours. This playlist contains Christmas carols like Jingle Bells, Holy Night, Santa Claus is coming to town, Silent Night, among many others performed by artists such as Frank Sinatra, Elvis Presley and The Beach Boys. For Latinos, the song Merry Christmas by José Feliciano is also present in this selection generated by Spotify.

For the public who likes songs more modern, the list called Christmas Hits also created by Spotify is also very popular with more than 5 million I like and 100 songs selected for the users that accumulate 5 hours of reproduction total.

The modern classic of “All I want for Christmas is you” is part of the list along with other hits like Snowman (Sia), My Only Wish (Britney Spears), Mistletoe (Justin Bieber), and many more. Other lists that are popular and contain festive songs from different genres to celebrate the Christmas They are “Christmas for children”, “Latin Christmas 2022″, “Christmas Pop” and “Family Christmas”.

In the case of the application of Apple Music, this offers various options for Christmas-themed music lists. One of the main ones that appear in the first places of searches is “Christmas songs: essential” and is made by Apple Music.

Like on Spotify, All I want for Christmas is you ranks in first place as the theme that opens the playlistbut there are also hits like “Silent Night”, “Santa Baby”, “Jingle Bell Rock” among others in a mix of modern, classical, English and Spanish music.

For those who want a more immersive experience, Apple Music has designed a playlist with songs that can take advantage of the feature Dolby Atmos and spatial audio that are present on the platform.

As in the previous one, all songs included in this list belong to modern and classical artists. Other relevant lists that were also created by Manzana They are “Christmas for kids”, “Christmas in Spanish”, and “Christmas full of pop”

DeezerFor its part, it also presents lists of songs dedicated to Christmas parties such as “Family Christmas”, a list that includes songs by artists such as Sebastian Yatra, Ventino, Ariana Grande, Sam Smith, Reik and many more who sing in English and Spanish.

“Christmas carols” is the list that has the most classic songs of the holidays, while “Christmas pop”, “Children’s Christmas” and “Latin Christmas 2022” are also mixes of modern music and classics of the end of the year celebrations.