Silvio Santos is speechless. And Silvio Santos without a voice is like Picasso without paint, Ferrari without gas – only worse. At least for Brazilians. Because Silvio Santos is a central character in the country’s popular culture, a subject who transcends his own existence on earth and who has already constituted himself as a myth, still in life. A self-made myth, but a myth nonetheless.

I begin this text in this way to praise one of the choices made by the series The King of TV from Star+, which intends to tell the story (or stories) of what is probably the biggest figure on Brazilian TV, the presenter and owner of SBT Silvio Santos, currently 91 years old.

Everything we know about him has to do with what his biographers managed to rescue, but above all with the image he himself built (and controlled) about his character. Senor Abravanel, as we know, is not Silvio Santos, even though these two individuals are confused at various times.

Therefore, there is great wealth in this series, directed by Marcus Baldini (from the film Bruna Surfistinha), by choosing to dive into the delirious and megalomaniac atmosphere that Silvio Santos created, with great care, to introduce himself to his “coworkers”.

So don’t expect The King of TV a concern with realism (at least in the sense most traditionally associated with this artistic style), but, rather, a vision of something caricatured of SS and its surroundings – in which people/characters such as Gugu Liberato, Roberto Marinho, Iris Abravanel orbit , the stage assistant Roque. The series’ vision clearly lives up to the life of someone who has always chosen to present himself as a caricature.

The result, in the first season of TV King, are eight episodes of an exaggerated narrative, with many funny moments, in which past and present are mixed in a kind of great hallucination – which reminds a little of the strategies used by Guilherme Fontes in the film Chatô: the King of Brazil (2015), who also dares to tell the life of another giant of mass communication in Brazil.

The King of TV: between myth and drama

I consider the idea of ​​using, as a guideline, the episode that took place in 1988, when Silvio Santos discovered polyps in his throat, which made him have to undergo a surgical procedure and risk losing his voice, very opportune. As the series makes clear, this would mean (at least in Silvio’s mind) the destruction of the gigantic media empire that the presenter managed to raise, with great difficulty, even from a very poor background.

As is well known, Senor, a son of Jewish immigrants, worked as a street vendor in downtown Rio de Janeiro to help put food on the table. Unlike his other competitors who own broadcasters, such as Roberto Marinho, Silvio Santos was not born in a golden cradle – and what he configures as a self-made man and someone who was always close to the people.

His talents for trade were recognized as early as his street vendor period. The teenager’s imposing voice soon brought him an opportunity on the radio, bringing Senor do Silvio closer and, with it, the great passion of his life: communication with the great masses.

From then on, according to the approach taken by the series, the presenter did not measure efforts to achieve his goals. He is played with great vigor (and courage) by three actors: Guilherme Reis, as a teenager; Mariano Mattos Martins, as a young adult; and José Rubens Chachá, at maturity. The last two, in particular, do a masterful job, giving birth to a ham, obsessive, careerist Silvio Santos – which reveals the audacity of messing with an icon still alive.

The presence of the three Silvios ends up working in The King of TV as the axes that make the narrative go through different moments in the chronology of the presenter’s history: his marriage to a childhood sweetheart, Cidinha (the great Roberta Gualda), who he starts hiding from the public to pass as a heartthrob; the threats caused by Gugu (played in an amusing way by Paulo Nigro, who made Chiquititas and several biblical novels by Record); his marriage to Iriz (veteran actress Leona Cavalli) and her central role in his life and career; the controversial relationship with those who would be her right-hand men, Stanislau (played by Leandro Ramos and Emílio de Mello) and Cleusa (Larissa Nunes and Cassia Damasceno).

Inaccuracies in the script? 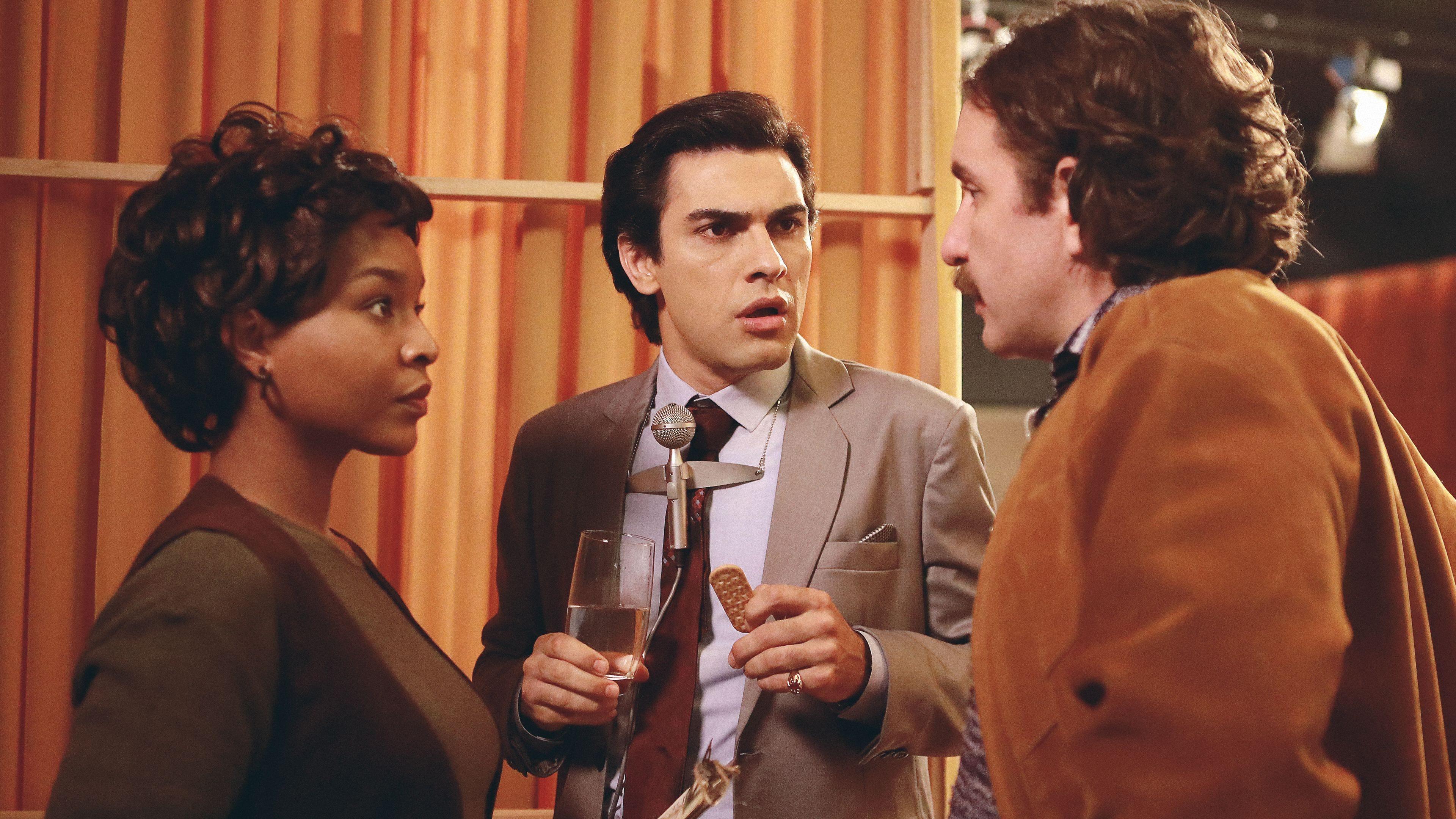 Some criticisms about The King of TV point out some mistakes that would have been made in the series script. The “accusation” would involve inaccuracies in the well-known history of the SS, both in chronological aspects and exaggerations involving its so-called mythical trajectory. This could happen, for example, in a certain dialogue that Silvio has with the businessman Roberto Marinho, in which he is advised to be careful with Record, or in the approach to the episode in which SS and his minions need to court (in a very literal) General João Figueiredo (who several times repeats his famous phrase “I prefer the smell of horses to the smell of people”, which he certainly did not do in that situation) to obtain the concession of the SBT.

I believe that it is a mistake to consider these questions as errors. For a pretty obvious reason: The King of TV is not intended to be an official or reliable version of Silvio’s story. It is an unauthorized series, with a lot of poetic freedom for the production to sew the plot points as it sees fit.

As I have already argued in this text, I think that the somewhat “crazy” tone of the series fits very well with the persona it intends to portray. This justifies, in fact, several liberties taken in the narrative, such as the portrayal of an openly gay Gugu, or a television director with strong feminist discourses and who goes to luxury parties dressed in tuxedo during the 1970s, something that probably didn’t happen.

By treating this whole story by the shades kitsch with which she herself was painted (both SBT and its owner have always positioned themselves as admittedly cheesy entities, oversomething that is made explicit throughout the scenography), The King of TV hits hard. And more than that: it takes an important step in the history of Brazilian popular culture by creating an audiovisual memory for one of its most remarkable characters. Let the second season come.

According to Ming-Chi Kuo, a wave of unbuttoning may start

The Galaxy Z Flip4 dresses up in luxury