On November 23, Honor will hold the Chinese premiere of the 80 series and its new bendable smartphone, the Magic Vs. The Honor 80 series can mean a total of four devices, the basic model, the 80 SE, the 80 Pro and the top model 80 Pro+. Earlier there were rumors that Honor would continue to increase the megapixel numbers this year, and now one of the Chinese advertising materials confirms this. THE On Weibo from the poster shared via the website shows that in addition to the Honor 80 Pro+, the Honor 80 Pro will also use a 160 MP sensor behind its main camera. 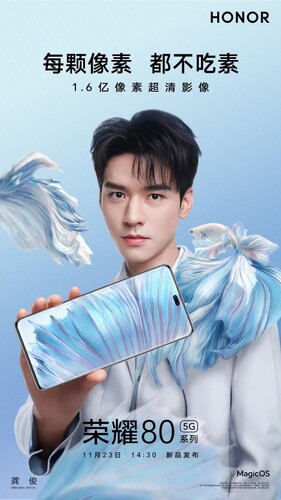 The image also confirms that there will be an elongated, pill-shaped camera cutout on the front panel, which, according to rumors, will house two 50 MP cameras, but the 3D identification system used by the Magic4 Pro will be omitted. It is also known about the devices that the Pro model will be built around a Snapdragon 8+ Gen 1 chip, while the basic Honor 80 will use the Snapdragon 782G system chip. The phones will be sold with the MagicOS system in China, international sales are questionable, but in light of the fact that the Honor 70 launched in the West in the summer, and the Honor 60 has not left Asia, it is not worth waiting around.

How to use video podcasts on Spotify