2021 is coming to an end, so Free fire deserves a review of the best that has continued despite the updates. One of those things is the Free Fire character combinations, whose powers make games more competitive and fun for the Garena community.

In addition to taking advantage of the functionality of these characters, each one has three spaces where players can equip the abilities of other characters simultaneously. However, players must buy them through gold or diamonds. Only one of the abilities in these combinations can be active. 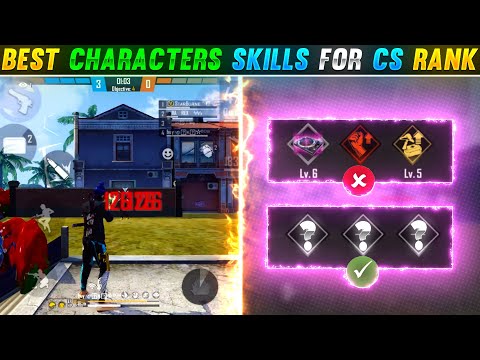 Maro’s Falcon Fervor causes damage to increase with distance, up to a total of 5%, and damage to marked enemies increases by 1%, and Rafael gives a silencing effect when players use snipers and marksman rifles .

Wukong transforms players into a bush with 20% slower movement speed and lasts for 10 seconds. Kla can help people in close-range combat. Regarding Antonio’s ability, players receive an additional ten HP at the beginning of each round. Additionally, Joseph helps attack / evade enemies, and with him equipped, movement and running speed is increased by 10% when taking damage.

Skyler has the Riptide Rhythm ability on Free Fire: unleashes a sonic wave forward, damaging five gloo walls in a range of 50 meters. D-bee is amazing for running because movement speed increases by 5% and improves accuracy by 20%.

Also, if an enemy within 80 meters range hits the player, they are tagged for 6 seconds due to the damage dealt by Shirou. Lastly, Kelly works well in various combinations because her ability increases running speed.

A 5 yard aura is created by Alok’s ability, increasing movement speed by 10%. Also recovers 5 HP / s for the next 5 seconds. Mucus marks enemies who are shot for 2 seconds.

Jai’s Furious Reload restores the magazine to 30% of its capacity when players take down an enemy. With Luqueta, each kill increases the maximum HP by 10, up to 50, which means that five kills will result in maximum health of 250.

K mainly increases the maximum EP of users by 50. Additionally, Jiu-jitsu mode creates an aura, and allies within it will get a 500% increase in EP to HP conversion. On the other hand, the psychology mode will help players to recover 3 EP every 2.2. seconds.

If users want to play aggressively, they can also equip Miguel to recover 30 EP so they don’t run out of EP.

Jota is also another source of HP, as players will regain it after hitting opponents. They will also regain 10% of their HP after knocking out enemies.

Fortnite19.10 update patch notes: all the changes and improvements of