After months of rumors and indiscretions, Sony has officially lifted the veil on Xperia 1 IV , its top of the premium range that continues the path traced by its direct predecessor in the photographic sector. Also this year, in fact, Sony focuses on an increasingly extreme approach to zoom and enriches its top of the range with functions and features that make it complete in every respect, from photography to the use of multimedia content, without forgetting gaming. So let’s find out the main features of Xperia 1 IV. 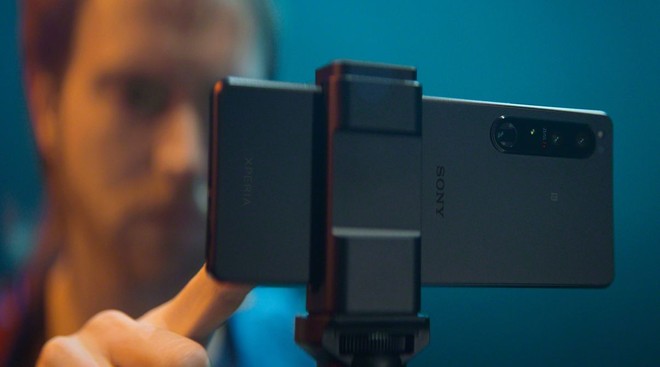 Last year Sony had amazed by presenting the first periscopic zoom with variable focal length, going from 70 to 105 mm, while this year the Japanese house wanted to go further and introduce a system of lenses that guarantee a continuous optical zoom between 85 and 125. mm ( Correction: the zoom is continuous between the two focal lengths, but the lenses are fixed as on the previous model ).

In support of the periscope system we find a 12 MegaPixel Exmor RS sensor with a high reading speed, equal to 120 fps. At the time of writing, Sony did not reveal more details on the sensor and its size, but confirmed that these characteristics are the same that we also find in the sensors of the other two cameras that make up the rear compartment, a main 24 mm wide and an ultra wide 16 mm . We also find the same type of sensor on the front cam (but we move to a 1 / 2.9 “, larger than the predecessor), the latter capable of shooting videos in 4K HDR.

The new optical zoom compartment is also assisted by the software that allows you to make a practically imperceptible transition between all the cameras , so it is possible to switch from ultra wide to the maximum zoom of the periscope without interruption. There is also the iToF 3D sensor , thanks to which the photographic sector can receive valid support during the focusing phase, given that the AI ​​algorithm that manages it allows to better recognize the subjects and to maintain the correct tracking even in conditions low light.

Sony continues its path of rapprochement between the mobile division and the one that deals with its Alpha cameras and also in this case we are faced with a photographic sector developed in synergy between the two divisions. Thanks to this come advanced features such as Real-Time Eye AF and Burst Mode at 20 fps with AE / AF HDR on all 3 rear lenses , in addition to the management of the white balance operated by the AI ​​in support.

Also on the Xperia 1 IV the possibility of shooting slow-motion videos in 4K HDR at 120 fps (up to 5x at 24 fps) returns – also in this case on all lenses – made possible by the optical image stabilization through Optical SteadyShot with FlawlessEye . On all the lenses, made by ZEISS and calibrated specifically for Xperia 1 IV, we find the ZEISS T * coating for the reduction of reflections, now a real recurring element of Sony’s top range. 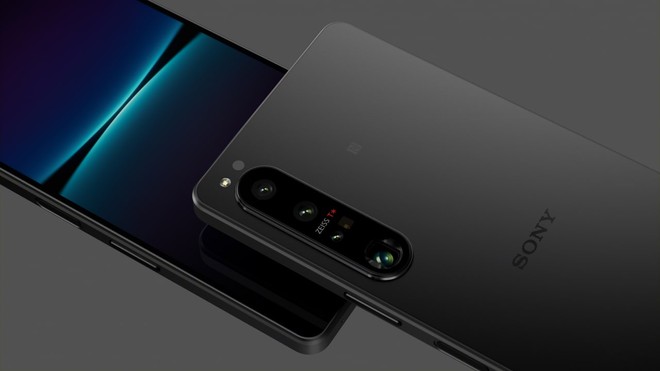 The video sector has been further improved following the feedback received from content creators, thanks to which Sony has developed the new Videography Pro mode . This allows you to manually intervene on many aspects of video recording and also allows you to change the focus, exposure and white balance even while recording is already started, thus offering further options for customizing your own style of recording. recovery.

Also comes the Eye AF function during video and multi-frame recording, which allows you to access a wider dynamic range without compromising the resolution. For creatives who want to give a more cinematic edge to their footage, Sony has also introduced the new Cinematography Pro option “Powered by CineAlta “, which gives you access to professional color calibration and parameters.

The Japanese house has also paid attention to the increasingly widespread phenomenon of livestreaming and has improved the capabilities of the smartphone also in this field, making the Eye AF and Object Tracking functions available even during streaming . Obviously, the options that allow you to connect the Xperia 1 IV to an Alpha camera and use it as an external monitor or to connect the Vlog Monitor to use the rear cameras to record vlogs are also always available, without resorting to the front one. Recall that even on the Xperia 1 IV there is the physical button dedicated to the camera, located on the right side of the smartphone.

UNDER THE SHELL A REAL TOP OF THE RANGE 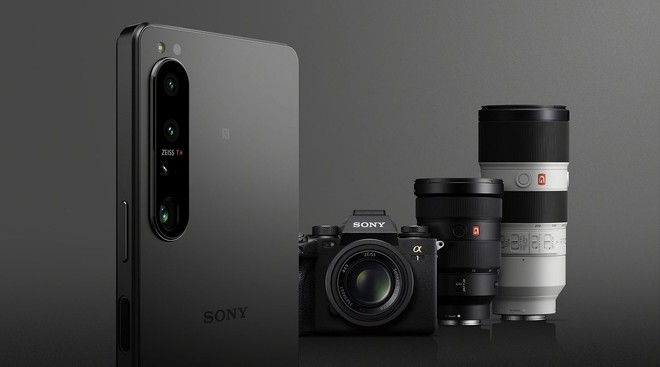 The attention paid to the photographic sector is undoubtedly indicative of how important this element is for Sony, however it is certainly not the only one on which the Japanese house has paid attention. Under the body we find in fact all the technical specifications that are expected from a true top of the range of mid-2022 , so we are talking about a smartphone equipped with the high-end solution from Qualcomm, or Snapdragon 8 Gen 1.

To assist the SoC we find 12 GB of RAM and 256 GB of non-expandable internal memory, as well as a 5,000 mAh battery with fast charging support that allows you to recover 50% in 30 minutes . It is certainly not one of the fastest solutions among those on the market, however Sony plays the card of long-term duration, since it speaks of a battery capable of offering a life cycle of up to 3 years .

To complete the equipment there is the presence of the IP65 / 68 certification, a design in line with that of the Xperia tradition, characterized by square shapes and the combination of a metal edge and two glass panels – Gorilla Glass Victus in this case – for the front and back of the smartphone. As for the screen, also this year we find a 21: 9 OLED unit with 4K resolution (it should be the usual 3,840 x 1,644 pixels) and refresh rate at 120 Hz (sampling of touches at 240 Hz).

Sony talks about a screen that is 50% brighter than its predecessor , which had a peak maximum brightness of around 840 nits. More precise data is currently lacking, but that means the Xperia 1 IV is expected to approach the 1,300 nits peak that we increasingly find on other lower-end devices as well. The improvement in brightness has allowed us to introduce Real-time HDR technology and as usual we find a BRAVIA X1 processor for panel management when playing Dolby Atmos content. Some of these can be consulted through the new BRAVIA CORE service dedicated to Xperia smartphones, which allows you to access films and content designed for the 21: 9 panel of Xperia 1 IV. 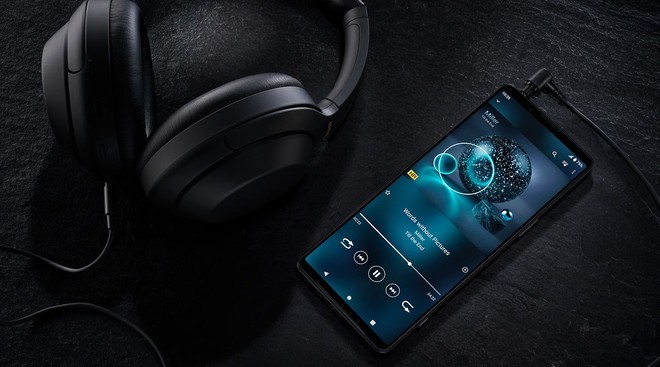 Although Xperia 1 IV does not present itself with the classic lines of a gaming phone, the top of the Sony range does not betray the DNA of the Japanese house and has several optimizations for games, thanks to the presence of the Qualcomm Snapdragon Elite Gaming platform and other dedicated solutions.

For example, among these we find the series of Gaming Gear accessories designed specifically for Xperia 1 IV – currently still under development – which will allow for long-term gaming performance to be optimized through additional cooling systems and improvements regarding transmission in game session streaming. The Gaming Gear accessories will be made in collaboration with the Japanese SCARZ esports team and will be released in select markets in the fall.

In addition to accessories designed for gaming, Xperia 1 IV immediately offers the Heat Suppression Power Control system for managing temperatures (active both during the game and while charging), the ability to record clips containing the last 30 seconds of play. , the Game Enhancher suite that also includes a complete smartphone streaming platform, also optimized for PC streaming ( allows you to capture player voice, game audio and video through the Type-C output ). All this attention to gaming has allowed Xperia 1 IV to be chosen as the reference device for the next PUBG MOBILE E-sports Global Tournament 2022.

The multimedia equipment of Xperia 1 IV is completed by the particular care also placed on the audio sector , created in collaboration with Sony Music Entertainment . This has led to the inclusion of a new set of stereo speakers that improve bass reproduction and the ability to manage audio in 360RA (360 Reality audio) format, also through the conversion of stereo sources into multi-channel audio. We also find support for DSEE Ultimate, the Bluetooth LE format and the new Music Pro function that allows you to record professional-level audio using smartphone microphones.

Music Pro uses a cloud-based computational system and therefore allows you to have more power available for audio processing, removing background noises and other unexpected noises, thanks to a particular segmentation and separation technology. sound . The app reproduces the frequency response of Sony’s condenser microphones and produces reverb similar to that of a professional audio device, also allowing you to record a song and guitar sound so you can separate and mix the two tracks. The application is free for registration and editing, while the cloud functions are subject to a monthly subscription.

The new Xperia 1 IV will be available from mid-June in some selected markets – including Europe – and will be offered at a price of 1,399 euros in the three colors Black, Ice White and Purple, an undoubtedly important figure which confirms the intentions of the house. Japanese to position itself in a premium segment with a proposal designed for an audience particularly attentive to the exclusive photographic features of the smartphone.

Together with Xperia 1 IV, Sony has also announced the availability of a particular cover with kickstand called Style Cover with Stand , which will be available at the recommended price of 34.99 euros . in the three colors Black, Gray and Purple. In this case it is a case designed to enhance the modern design of the smartphone and is made of antibacterial material. The cover will also be available at the launch of Xperia 1 IV, therefore always from mid-June.

The Xperia 1 IV packaging has been reduced by 50% compared to the past and does not include the charger and power cord. This is a choice that Sony has made as part of the Road to Zero project initiatives that aim for the company’s zero environmental impact by 2050.