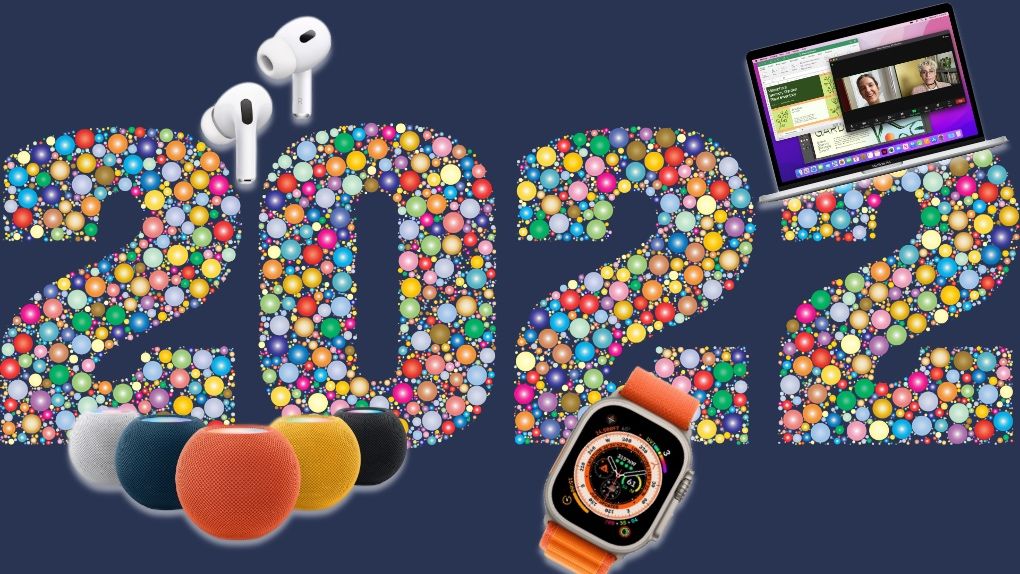 2022 started with… nothing. It would be until March before a new product was released. But the occasional press release dampened, such as Apple celebrating “heart month” in the US. Something that Sweden yawned past. It’s not that we think it’s a bad idea for Apple to encourage physical activity, but it didn’t set our hearts on fire.

About a week before March 8, Apple sent out invitations to an online event called Peek Performance. The rumor mills shifted into overdrive, now damn the Mac Pro was going to be launched.

Which it didn’t. But still did somehow, albeit with a different name. And form. Apple launched Mac Studio, which is best described as a few Mac Minis stacked on top of each other. In it, however, was an even bigger novelty, the M1 Ultra. By bridging two M1 Max with a technology called Ultrafusion, Apple had, for lack of another word, soldered two chips together.

The result is a monster chip with 114 billion transistors, 20-core processor, 64-core graphics processor and a 32-core Neural Engine. Incidentally, Mac Studio cannot be upgraded with more memory if needed.

We also got the Studio Display, a 27-inch screen endowed with the A13 processor. Soon after it reached consumers, complaints raged that the built-in webcam was Nokia 3210i-class. But an update solved the problem.

A new iPhone SE and a green iPhone also appeared. More interestingly, the iPad Air got an M1 plug and new colors. We liked it, but dissed the few storage options offered.

As usual, WWDC took place in June, specifically on the 6th. Instead of a live event, we got to see 3,546 videos where Apple executives compared the adjectives to new levels. But we also got the M2, a sneak peek at Mac OS Ventura, and a completely redesigned Macbook Air with the aforementioned M2 chip. A computer that we really liked, even if it was equipped with slower storage than the Macbook Air M1 – we got more screen after all.

A week or so after WWDC, a press release dropped that the Macbook Pro 13 would be released. Even the one with the M2 chip. We tested it and could see to our great disappointment that the universally disliked Touchbar remained, like a hideous wart on a beautiful face. How unpopular is it? Even Apple didn’t mention it in its press release.

We tested the computer and could only conclude that it was good but at the same time something of a shrug. What was really scary was that the Facetime camera was not updated in a pro model, while the camera in the Macbook Air M2 was…

The only thing of interest that happened was that the Macbook Air M2 was released in stores and sold out in no time.

And sure enough it turned out that way. We were even there, but there was no direct live event. Tim Apple…sorry, Cook, took the stage, greeted everyone, and disappeared in favor of more videos comparing adjectives to new giddy heights.

But there were new phones. Or two new and two semi-new. The iPhone 14 Pro models got the A16 Bionic, new cameras and the “dynamic island”. They also got always-on displays, which proved to be so much on that an update appeared that put them more into Android-like “always on” existence.

The iPhone 14 and 14 Plus got last year’s pro processor, the A15, and had to make do with a dull “always off” screen except when it should be “on” screen. And it was expensive too. War, inflation and component shortages are not a good combo. The iPhone was suddenly more expensive than ever. Something that caused some 2,156 Mac journalists to go into rage mode behind the keyboard as they cried their disappointment online before biting the bullet and ordering a new phone. Yep, same procedure as every year.

We also got the new Airpods Pro. And they were good! Apple’s sound engineers tweaked both sound and noise reduction in a lovely combination.

Clocks begged it too. New Apple Watch Series 8, SE and Ultra. Apple Watch SE’s big news was that it had a new back. The Series 8 got a lot of exciting features, many of which made sense for women. And then we got Ultra. A massive watch made of titanium, with a built-in depth gauge, more buttons and functions. Expensive as hell, but it costs if you want to be at the top of Apple’s ecosystem. Regardless of the price, it was undeniably really cool! All watches received Watch OS9 as well as crash detection, more on that later.

However, what IOS 16 had that Android does not have is the ability to lift out the main subject from an image and paste it into a message or similar. The function is as fun as it gets. The undersigned has used it twice, but has been equally delighted both times.

Apple launches new Ipad Pro 11 & 12.9. New for this year is that they were gifted with M2. A news that was hardly unexpected. Like the iPhone, they cost an awful lot of money. The 12.9-incher with a terabyte of memory costs SEK 29,245. But they are fast, so fast that an investment in one will bear fruit for many years, the number of apps that can use the power are few. Ipad Pro is now at ridiculous “overkill” level. This is the tablet’s answer to Belgian Blue.

What was launched and which was more modest was the iPad 10th generation. Which now has the same processor as the iPhone 12. And the same appearance as Air, mini and pro.

Finally we got a unified Ipad line…

“How many different iPads are there?”
“Yes”

It is easier to keep track of a year’s accumulated navel hair. The number of different models of Ipad is easily confusing.

What the Ipad 10 got, however, was a sensibly placed webcam on the long side. And so we were gifted with a new dongle, because the Apple Pencil 2 does not work with the Ipad 10. And what a dongle it is! It only works with Ipad 10 and the first generation Apple Pencil.

Yes, there are reasons for this, the magnets didn’t fit blah blah blah, but don’t tell me that a company of Apple’s size and technical know-how couldn’t have come up with a more elegant solution.

A year without some kind of Apple-gate is like day without night, tonic without gin, tacos without salsa…you know what we mean. It turned out that Apple’s crash detection, which is found in all new phones and watches, alerted the emergency number in the US when its wearer went on a roller coaster ride.

As far as we know, this has not happened in Sweden. There have been cases in the US of users falling down the ski slope – who doesn’t? – when the alarm is triggered. The ski season is now approaching in Svedala. Remember, if you set a trap, you have ten seconds to sound the alarm. Unless a fix has been released. The undersigned has no desire to test.

Apple TV 4K, now with support for hdr10+. For reasons, it has been gifted with a faster processor than the Ipad 10. The model with ethernet was supported for threads, but not the wifi model. The big talking point for some reason became “WHY IS IT LIGHTER THAN THE PREDECESSOR”. Elementary, my dear Watson: passive cooling instead of fan.

Apple is launching its Self-Service Repair Store for Apple products on December 6. After pressure from the group Right to Repair in the USA, where the program was first launched, the opportunity to be able to repair your Apple gadgets yourself with original parts in the quiet corner of your home has arrived.

And it’s a confusing program that requires more steps than you thought possible to, say, repair your phone. Rent a repair kit, consisting of several (heavy) bags, from Apple for SEK 700 (!). Then you have to fill out paperwork, buy spare parts and more to end up paying more for a repair you do yourself than it would have cost if you handed the phone in.

In summary, 2022 was an ordinary Apple year. There were a lot of delicious products launched, some not so delicious, and some typical weird decisions that only Apple can make. And while the world raged over these decisions, Apple sat still in the boat with the lid on, knowing they’ve weathered worse storms than this.

Everyone is talking about Apple’s mixed reality headset. It will not be released in 2023. As recently as the other day, new rumors surfaced that it is delayed. It is not at all impossible that Apple’s R&D is working on a headset. But you can simply forget that Apple, a consumer-oriented company, will launch a headset with an entry price of around 1,500 dollars, which would be 15,000 bucks plus VAT, that is, over 20,000 kroner.

However, we will get new Mac computers, phones, watches and Ipads. It’s not that bad either.

PS. Forget the car. That won’t happen either.