No doubt Snapchat is always looking for innovations to improve the experience of its users. And once again it does so with the arrival of dual camera, a new feature of the social platform with which snapchatters will be able to capture multiple perspectives at the same time.

It is only a matter of the user opening the app and they will see a new icon in the toolbar for the Camera. The new Dual Camera feature allows you to use the front and rear cameras at the same time. smartphone.

With a simple “tap”, the user can start creating Snaps and Stories, or more elaborate videos for Spotlight, and in this way they will have the option to share the two perspectives of the moment instantly.

The Dual Camera is a very creative tool for you to the community can capture exciting moments while being protagonists of these memories, such as experiencing a music festival or everyday situations such as culinary adventures in the kitchen.

These are the functions integrated in dual camera

The Dual Camera is available worldwide from today for devices with system iOS (iPhone XS/XR or higher) and in the coming months it will also reach smartphones with an operating system Android.

On Snapchat, the community is rewarded for its creativity. Snap has a rewards program for content creators on Spotlight, with millions of dollars in prizes for the Snapchatters who post the best videos.

So it’s time to share all your Dual Camera creations in Spotlight. Or, if inspiration strikes instantly, the best would be to create a Snap and share it with friends, as well as publish it in the Stories.

Snapchat strives to design useful and fun features for its community. They know that Snapchatters love to express themselves creatively, connect with their closest friends, and be in the moment. Dual Camera lets you do just that, from multiple angles. Snapchat has a horror game

Snapthe company that owns the Snapchat social network, launched exactly one month ‘Ghost Phone’, the first play augmented reality that arrives at the application with the logo of a ghost.

This is an interactive experience consisting of nearly 100 mini-games in which the player must discover the secret of a found phone and solve the mystery of what happened to its former owner. To do this, they will need to recognize different surfaces using Snapchat lenses for Ghost Phone. 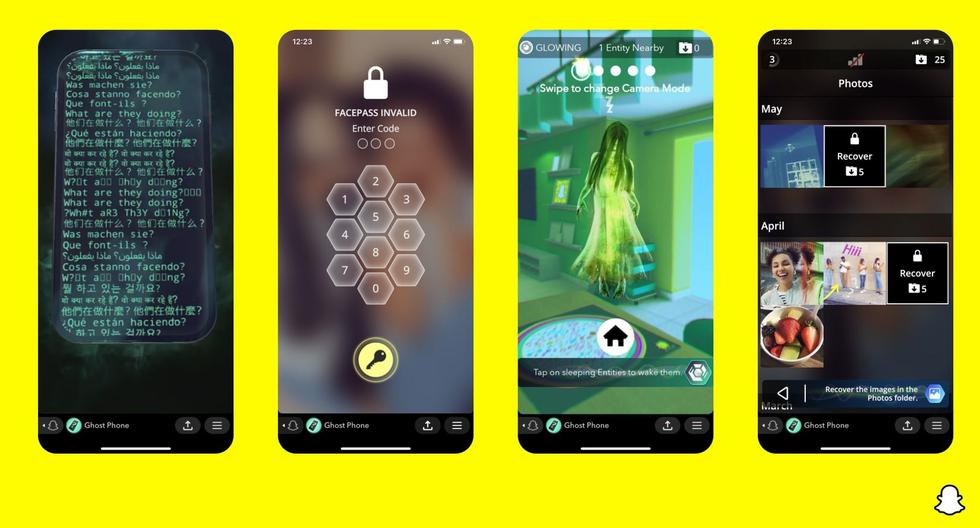 The user will have to get up, move around, collect the phantom energy inside the phone and move around the environment in search of ghostsall using the technology augmented reality scanning with Snapchat games natively developed by Snap.

It should be noted that of the more than 347 million Snapchat account users worldwide, more than 200 million use augmented reality every daywith an average of 6,000 million daily uses.

To play, all you have to do is open the Snapchat app Y search for “Ghost Phone” in the Lens browser, or look for a ghost icon behind the Rocket in chat.

Juan Gabriel: the recent controversies of his family and his return to music on his mournful anniversary number 6