Among the manufacturers of PCs and hardware components, the Taiwanese ASUS is certainly among those that boast the largest catalog, ranging from notebooks to desktops, passing through various types of components, peripherals (gaming and not), monitors, wheels, systems of dissipation and various themed product lines that in recent years have in fact made it successful. As vast as it was, the ASUS price list so far lacked a proprietary storage solution, obviously we are talking about SSDs for the consumer range , now more than widespread and with an ever-increasing interest in high-performance units that take advantage of the latest PCI-E standards.

Just to fill this “void”, but above all to align itself with competitors such as MSI or Gigabyte, ASUS has unveiled in the past few hours the arrival of its first high-performance NVMe SSD , this is the brand new ROG STRIX SQ7 . 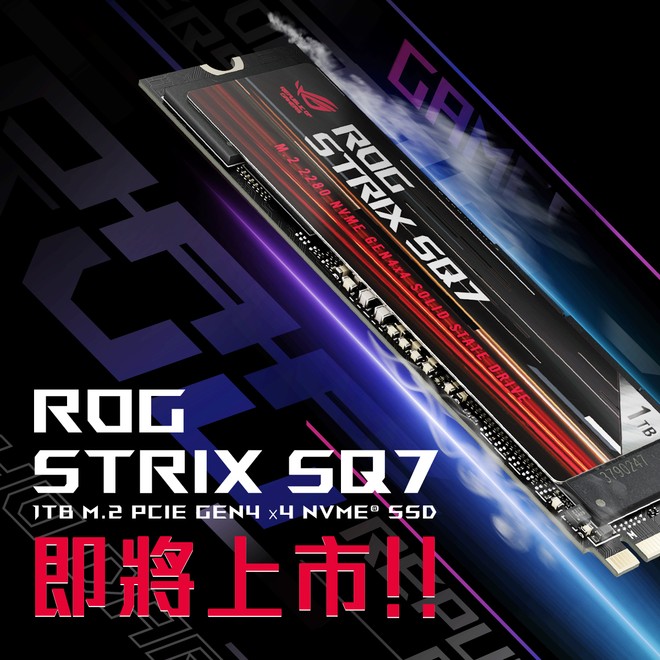 At present, the manufacturer has not provided many technical details, limiting itself to sharing a teaser of the product on its official Facebook page, which apparently will arrive shortly. The image above confirms that it is a M.2 2280 SSD with a PCI-E interface and a capacity of 1TB ; we do not know if it will be available in different capacity cuts, while regarding the performance we are faced with a PCI-E 4.0 x4 unit , like all the most recent proposals (see for example the Corsair MP600 PRO we reviewed ) .

No details on the controller used or on the NANDs, but we think of an SSD which, also given the ROG Strix logo, should be based on the Phison PS5018-E18 platform with TLC memories and DRAM cache; We therefore assume that ASUS could offer a hard drive capable of reaching a transfer-rate of 7 GB / s without problems. The ASUS ROG STRIX SQ7 NVMe is expected to be unveiled next week at the Boundless event.