Cloud gaming is experiencing a small revolution with the arrival of an RTX 3080 offer on GeForce Now. We tested the service and the difference is obvious … but not necessarily the way you think. 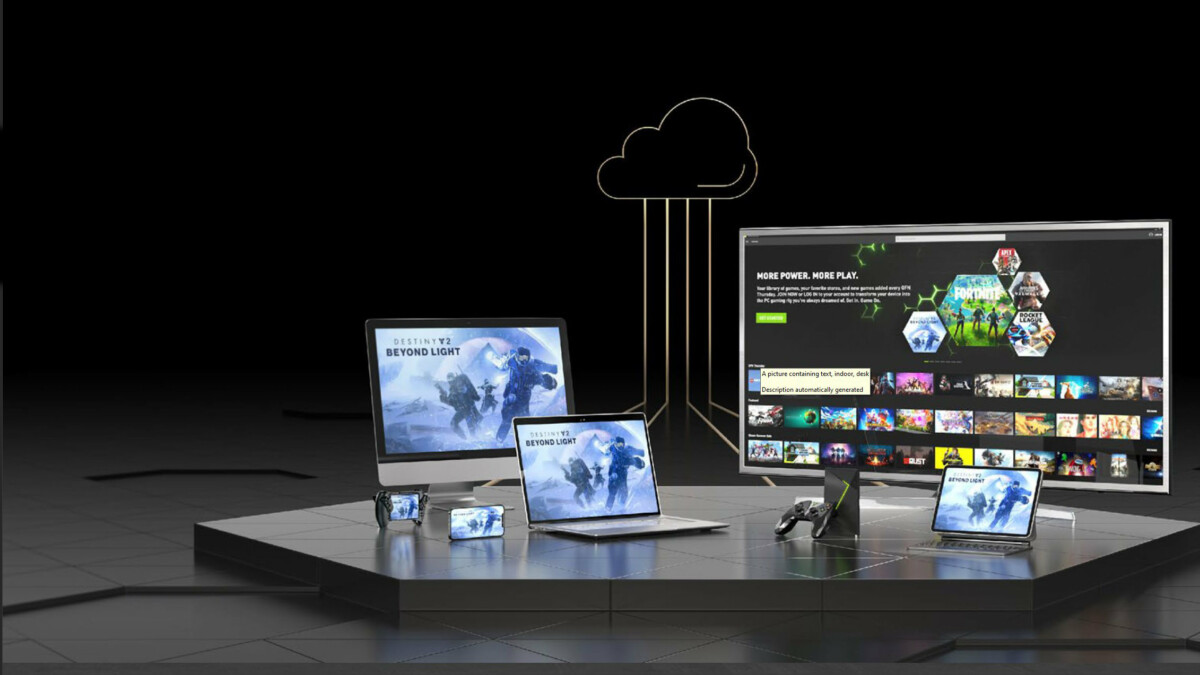 In recent years, cloud gaming has finally become a reality. If some services already existed before that, it is really recently that public offers have started to be interesting with GeForce Now, xCloud (the cloud gaming of Xbox Game Pass), Google Stadia or even Amazon Luna. These are good backup solutions, but it always happens that we notice some artifacts or effects of tearing during parties, even with a good connection. However, technology evolves and improves over time. This is the case for example of Nvidia which now offers a GeForce Now offer with the equivalent of an RTX 3080, available from this Thursday in France.

Getting started with the Snapdragon G3x Gen 1: Game console designed by Razer and Qualcomm

We tested this GeForce Now RTX 3080 package and the surprise was not where we expected. Explanations.

The GeForce Now offer is therefore now divided into three:

The specificity of this new subscription is therefore in its name. A new generation of graphics cards, therefore, allows more power to be deployed. We invite you to read our test of the GeForce RTX 3080 to get an idea of ​​the evolution brought by the “desktop” version of this GPU.

Graphically, we are on what is currently best on PC. The games are admittedly rendered in 1080p, but upscaled in 2K thanks to DLSS from Nvidia, directly on the servers. This allows in particular to take advantage of all the settings to the maximum while maintaining correct performance and thus avoid playing with a framerate winded. Even the most recent games run between 60 and 120 FPS, even in Ultra.

Let us note all the same that Nvidia applies automatic parameters in the games and these are sometimes very reduced compared to the capacities of an RTX 3080. Small downside: these parameters apply to each launch of the game, therefore a title that you request to restart before applying your settings changes will be reset without applying your choices (this is the case for example of assassin’s Creed Odyssey). We, therefore, advise you to go to the GeForce Now settings to activate the “In-game graphics settings” option and thus configure this point yourself while waiting for the automatic settings to be better managed.

Once this small setting is adjusted, you can then enjoy your games in the best possible conditions, with ray tracing and very fine details. This is the case for example on Control, a game renowned for its ray tracing pushed, which displays an image similar to that which one could find on a PC equipped with an RTX 3080 (see image in our test of the graphics card to compare). 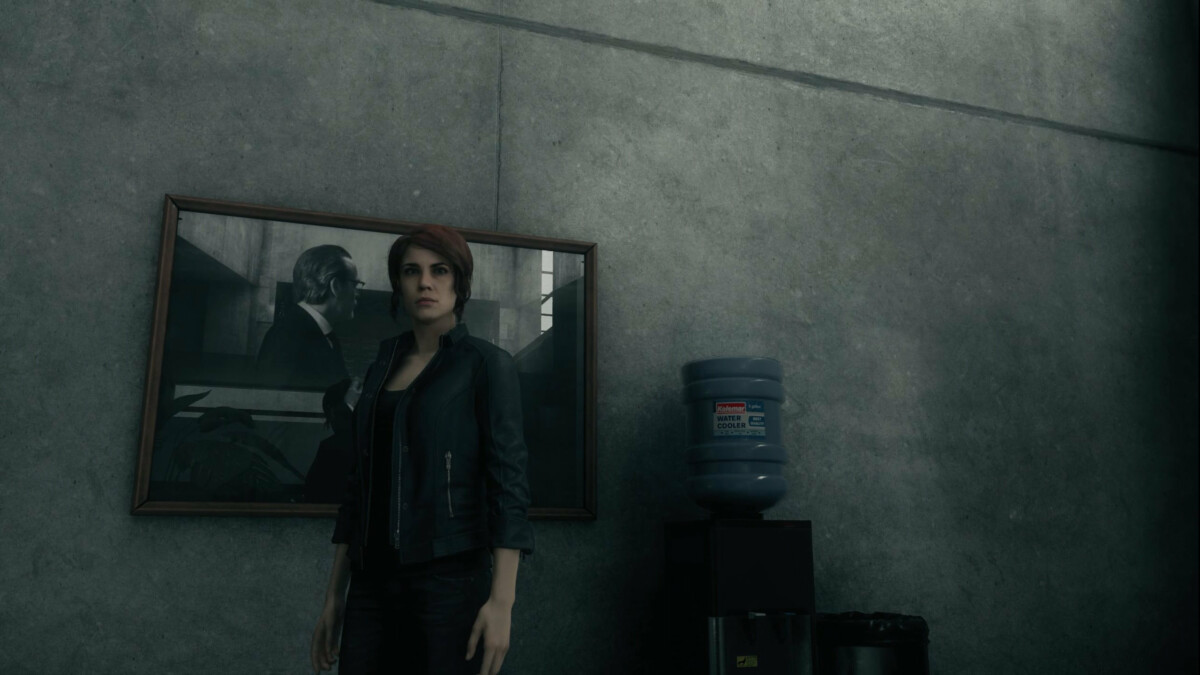 In terms of performance, the benchmark ofAssassin’s Creed Odyssey gave us an average of 74 FPS at 1440p, which is the equivalent of an RTX 2080 Ti (and slightly less than the 78 FPS we got with an RTX 3080 locally in a gaming PC).

However, an RTX 2080 is quite capable of producing the same images in 2K on a demanding game like Control or even Cyberpunk 2077, the RTX 3080 really pulling out of the game when you push the definition even further to play in 4K while keeping a framerate greater than 60 FPS. The GeForce Now RTX 3080 subscription being limited to a definition in 1440p, we can therefore say that it is overkill and that in view of the catalog of games listed on the service, a Priority subscription may be sufficient. This would be missing out on the real evolution of the RTX 3080 offer.

the cloud gaming adds a new layer in the visual quality of games: the quality of streaming. It is not only that the game is rendered at a good definition, but also that the video stream thus created is encoded of good quality and sent without problem to the game client. It is often on this point that the cloud gaming fishes . Blurry image, artifacts, or dropped frames (resulting in falling framerate felt) remind the player that his or her game spins several hundred kilometers away, in a data center.

If Nvidia works a lot on this point, depending on your internet connection, you will always feel a small effect with the Priority offer marking the difference with a local game. However, the RTX 3080 subscription brings one big difference: Adaptive Sync.

This VRR technology (like G-Sync or FreeSync) makes it possible to synchronize the images produced (on the server in this case) and the images displayed on the client’s screen. If this offers greater clarity for local gaming, the interest is all the greater in the cloud by managing lost packets or possible drops in connection to ensure an always fluid rendering. 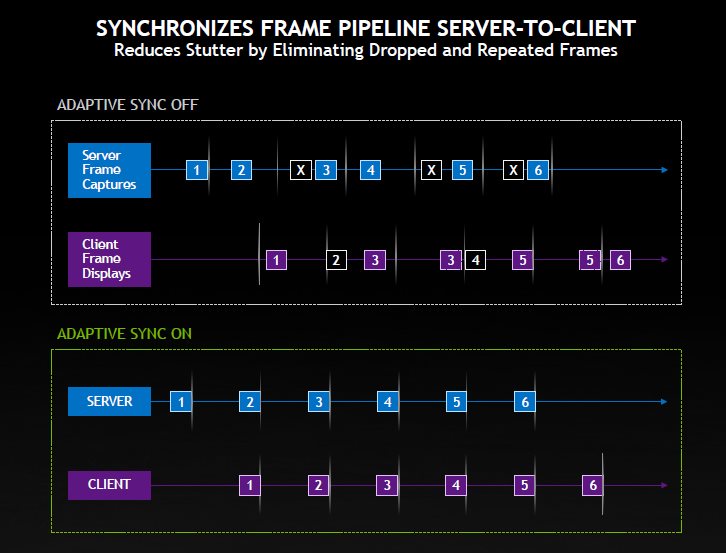 So much for the theory. In terms of practice, the result is simply breathtaking. With the RTX 3080 subscription, GeForce Now becomes most of the time as smooth as if you were playing locally. While cloud gaming was until then a good way to play single player games inaccessible for your configuration, Nvidia proves that it is finally becoming viable for all uses, including multiplayer.

So admittedly, I’m not a pro-gamer and I’m not at the point where I optimize every millisecond of latency that can allow me to improve my performance. But as a regular player I was able to spend hours on Rocket league Where CS: GO without the slightest frustration or even the slightest impression of playing in cloud gaming. And the strongest in history? My PC was then connected to WiFi 5 (5 GHz). No WiFi 6, no Ethernet and therefore a strong potential for packet loss… And yet I was able to offer my opponents the most beautiful headshots from my arsenal without suffering from latency. Well, let’s be honest: over about 6 hours of play, I felt a little slowdown, but I was lucky since it was a round of heating.

Be careful, however: this synchronization can be greedy in bandwidth and NVIDIA is already warning its subscribers by specifying that a fiber connection (50 Mb / s) is essential to fully benefit from the RTX 3080 offers.

The advantage of cloud gaming is obviously to be accessible on any configuration. This primarily concerns the PC, but also a TV box such as the Nvidia Shield TV. So I tried this subscription on mine, this time connected via Ethernet. Not only is the interface a little more pleasant than on a PC, but the result is really very good and allows you to play easily on the big screen at a lower cost.

For 150 euros (less during promotional periods) and with an RTX 3080 subscription, you can enjoy higher image quality than what the latest generation consoles offer, provided of course you have a connection internet and the game you are interested in on the service.

The limitations of GeForce Now

This is certainly where the shoe pinches for GeForce Now. Clearly, this RTX 3080 offering shows that the future of cloud gaming is within reach and that we can really move our machines to play from the cloud without the slightest loss of comfort. However, there are still a few constraints that could slow some down.

First of all, the internet connection. Until now, playing required a functional electrical network and a functioning gaming machine. For cloud gaming, to this must be added an efficient internet connection and a working server. For now, the number of ” superpods »RTX 3080 (Nvidia’s servers) is still limited. In Central Europe, we are currently connecting to Frankfurt, Germany, pending the opening of the Parisian servers scheduled for the beginning of the year 2022. During maintenance of this server, I, therefore, played several hours on the London server, which has shown a few slowdowns at times due to the ramping up of the Frankfurt player tipping. Nothing that stopped me from playing Guardians of the Galaxy, however.

This problem won’t be a problem in the future when Nvidia opens up all of their Superpods and sized them to handle the number of players. This is also why the offer is currently only available with a six-month commitment. 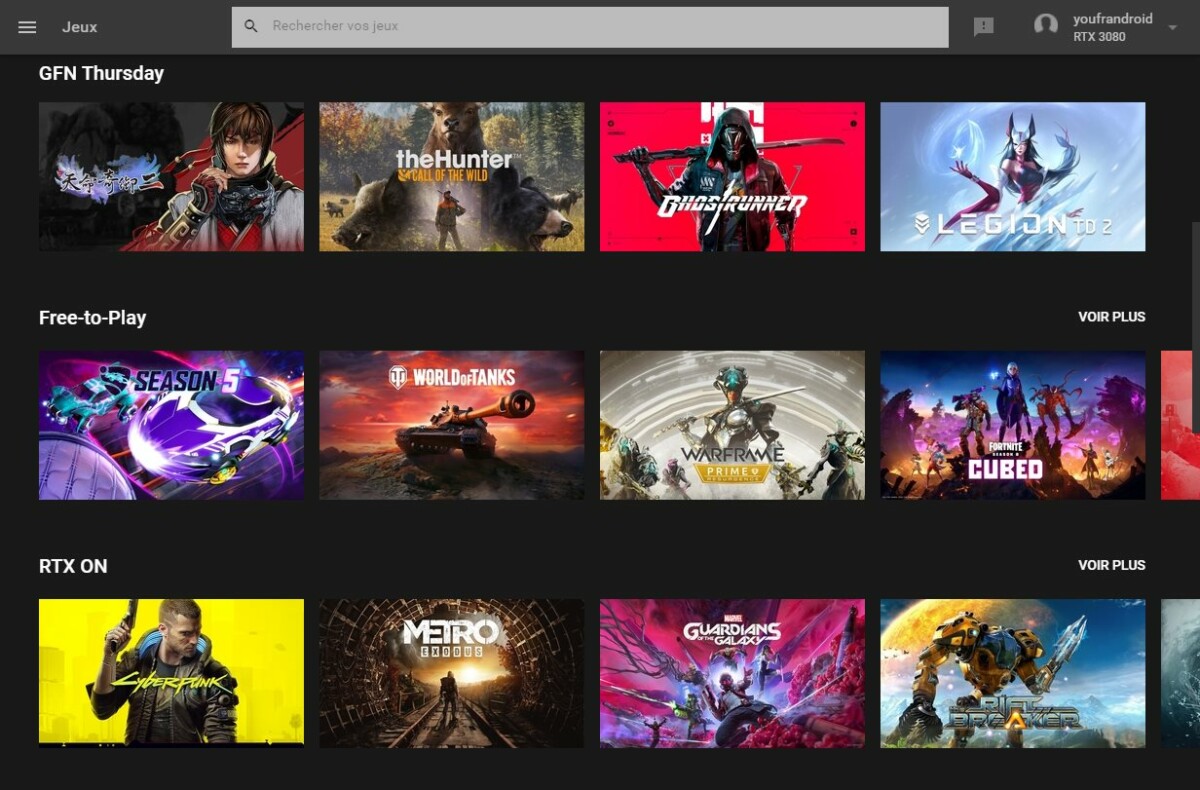 The second problem with GeForce Now comes from its interface and how it works. If the user experience is much more pleasant than a year ago, in particular thanks to the permanent registration of Steam and Epic Games accounts (which previously required identification with each game launch) and the addition of the recognition of AZERTY keyboards, some improvements in the display of games in the catalog could make the experience more transparent. As for the games available, their number is still limited and we regret for example the absence of Microsoft games (and Xbox Game Pass PC) or some very recent or cult titles.

The catalog grows every Thursday and you can find the complete list on the Nvidia website. In addition, some publishers like Ubisoft offer all of their games on the service, while the most reluctant at the start, like EA or Square Enix, are gradually returning to it. Obviously, the more players there are, the more publishers will be interested in the formula.

Anyway, on the purely technical part of cloud gaming, Nvidia is far ahead of its competitors.

All about Nvidia GeForce Now

Fortnite: what happens if we get on the back of a Klombo dinosaur