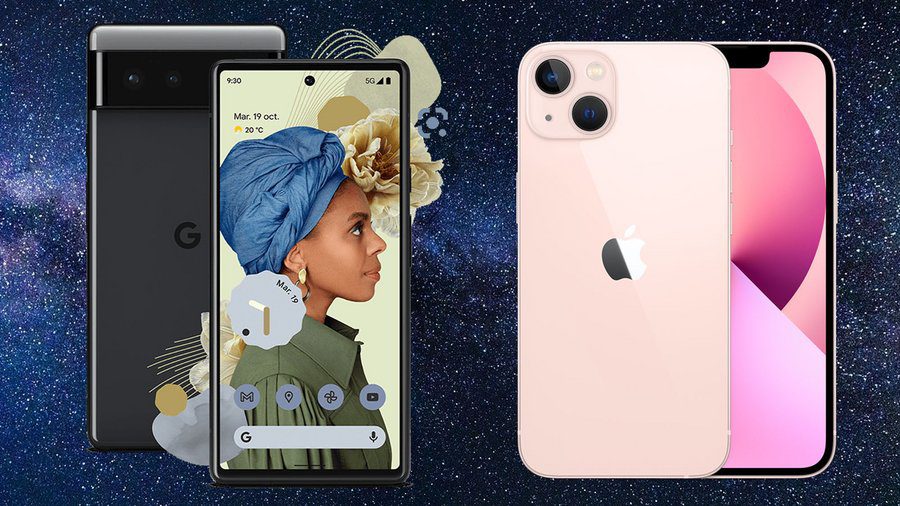 Can the Pixel 6 be complete with the iPhone 13? When comparing the datasheets and features, the new model of smartphone from Google has a playing card.

Google has launched its Pixel 6, which will be released on October 28th. A smartphone at an aggressive price given the technical specifications it presents and which could become the new showcase of the Android ecosystem. So obviously, we wanted to compare it to its rival under iOS, Apple’s iPhone 13. Note that this is for now a theoretical comparison: we took the Pixel 6 in hand, but not long enough to get a very precise idea. A full test will arrive soon on TechMarkup.

We have compared Pixel 6 vs iPhone 13 below in detail

The iPhone 13 is more compact than the Pixel 6

The first glaring difference comes from the design, with two divergent visions. Upfront, the Pixel 6 houses its front camera in a discreet central punch, while Apple still relies on its notch system that eats up a good chunk of the screen. On the iPhone 13, the panel is strongly rounded at the edges, which is much less the case on the Pixel 6.

On the back, the iPhone 13 houses its photosensors in a block in the upper left corner, as has been the practice for two years. Google has opted for a more original approach with a horizontal layout, forming a black band that separates the back panel into two parts. The 6.4-inch screen of the Pixel 6 is larger than that of 6.1 inches of the iPhone 13. Some people prefer to gain in viewing comfort, others in ease of handling and use. The Pixel 6’s AMOLED panel has a Full HD + 2400 x 1080 pixel definition and a 90 Hz refresh rate, where the iPhone 13’s Super Retina XDR OLED offers a slightly higher image quality of 2532 x 1170 pixels but remains stuck at 60Hz for fluidity.

The Pixel 6 offers support for HDR10 +, while the iPhone 13 supports HDR10 as well as Dolby Vision. A very practical feature of Android, the Always-on which allows certain information to be displayed permanently on the screen (time, date, battery level, notifications) is present on the Pixel 6 and absent from the iPhone 13.

An Android smartphone finally as powerful as an iPhone?

IPhones are historically more efficient than the best Android smartphones. And the iPhone 13 hit hard again this year with its A15 Bionic chip engraved in a fineness of 5 nm. The big news at Google is to equip its Pixel 6 with its very first in-house SoC, the Tensor, developed with the help of Samsung. The first benchmarks are promising but we are waiting for more precise measurements before deciding whether the Tensor is at the level of the A15 Bionic.

As a reminder, the latter consists of a Hexa-core CPU within particular two cores clocked at 3.22 GHz for heavy tasks, while the Tensor’s processor is octa-core and has two Cortex-X1 cores at 2.80 GHz to name the most powerful. The autonomy will not be able to be compared precisely for a few days, but the Google Pixel 6 starts with a head start with its generous battery with a capacity of 4614 mAh, against 3240 mAh for the battery of the iPhone. The difference that should make the difference, even if we know that the Android system is more resource-intensive than that of iOS and that the smoother and larger screen of the Pixel 6 is undoubtedly more energy-intensive. The energy consumption of the different chips must also be taken into account.

It is difficult to separate them just by looking at these specifications. Pixel size and sensor aperture are more interesting on the iPhone 13 for capturing bright shots, but the Pixel 6 replicates with its 50 MP with pixel binning, a technique that involves merging four pixels into one in order to capture more light. Finally, special mention to the mechanical stabilization of the iPhone 13.

The 12 MP and f / 2.2 ultra-wide angle of the Pixel 6 offers a 114˚ field of view with distortion correction, while the 12 MP and f / 2.4 of the iPhone 13 widen the field of view to 120 °. On the video, both smartphones are capable of filming in 4K at 60 frames per second and enjoy a similar slow-motion mode at 1080p up to 240 frames per second. But Apple has made video a specialty, and the iPhone 13 stands out with support for HDR, Dolby Vision, and stereo sound.

For many users, the sinews of war is on the software part. Between Google’s semi-open system and Apple’s double-locked system, everyone has their own preference. And of course, the services associated with these platforms (music, games, storage, etc.) play an essential role in consumers’ decision-making.

We invite you to consult our file devoted to iOS 15 and the one which details the new features of Android 12 in order to learn more about the two operating systems, their interface, their functionalities …

Note that the Pixel 6 is entitled to some exclusive features that are not found on other Android smartphones. Google has promised that thanks to AI and machine learning, the smartphone learns from our uses and adapts to it in order to improve its autonomy. The device also makes it easy to remove unwanted elements from the background of photos.

For its part, Apple has tamed AI for its cinematic mode in video, which applies a background blur effect behind the subject in the same way as for portrait mode in photos.

On paper, the iPhone 13 seems a bit more complete than the Pixel 6, which still manages to stand out in some categories. And one of the strongest arguments in its favor is surely its price since it is marketed at 649 euros, an aggressive price for a smartphone of this positioning.