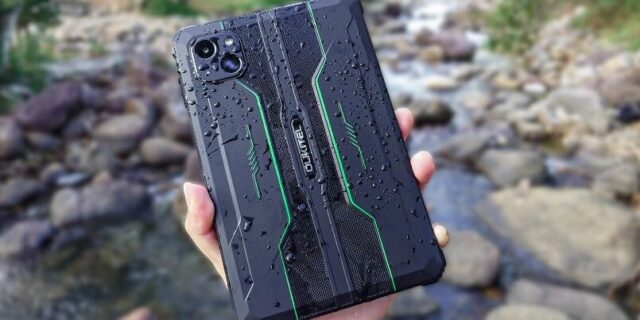 Oukitel’s first tablet with an 8-inch display has been released Oukitel RT3. The tablet has a reinforced device housing, so it has IP68 water protection, IP69K dust protection, and the exterior meets the MIL-STD-810H military standard. Made of rubber and plastic, the tablet measures 136.6 x 209 x 14 millimeters and weighs 538.1 grams. The 8-inch, 14.4:9 aspect ratio IPS LCD display has HD resolution (800 x 1280 pixels, 188 ppi) and an average brightness of 400 nits. The coating on it is said to be scratch resistant.

In terms of hardware, there are not many extras, MediaTek Helio P22 (PT6762) SoC is the brain of the tablet. This is a chip introduced in 2017, the CPU uses eight ARM Cortex-A53 cores, four of them scaled to 2 GHz and four to 1.5 GHz. There is 4 GB of operational memory and 64 GB of backup storage, but the storage space can be expanded with a memory card. 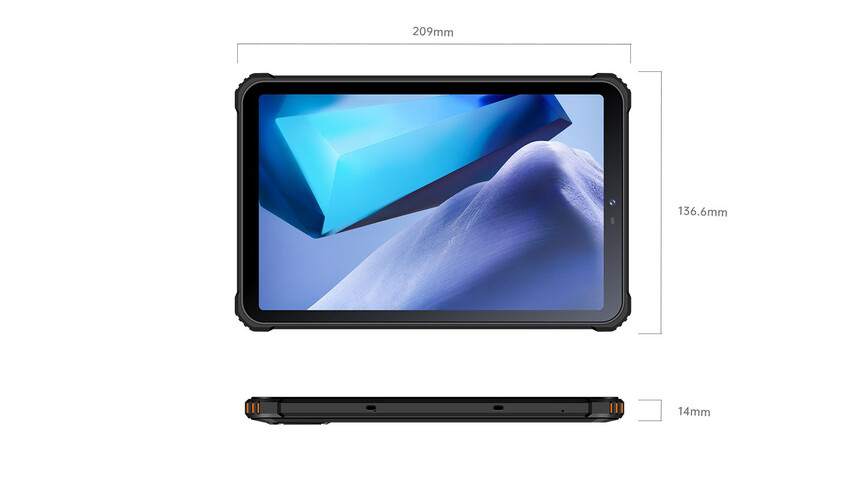 The tablet from the front and side. (source: Oukitel) [+]

There are two cameras on the back and one on the short side of the frame on the front. The role of the main rear camera is performed by a 16 MP Sony IMX519 sensor behind an f/1.8 aperture and supported by an LED flash. On the front, an 8MP Sony IMX314 works behind f/2.2 lenses for video calls. The second camera on the back is a 0.3 MP macro, using a GalaxyCore GC032A sensor, based on its specifications, its presence does not make much sense. 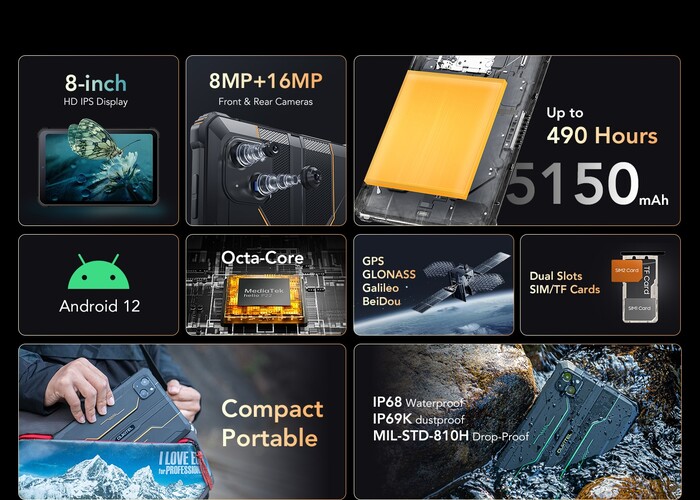 According to the manufacturer, these are the most important specifications of the tablet. (source: Oukitel) [+]

The two speakers seem to be positive, as does the built-in GPS (with GPS, GLONASS, Galileo and BeiDou support). It is also good news that there is Bluetooth 5.3, 4G connection and a double nanoSIM slot, dual-band Wi-Fi 5 (802.11 a/b/g/n/ac) and OTG capability via the USB-C connector. and Android 12 software with extras like compass, barcode scanner or virtual tape measure. The built-in battery is 5150 mAh, it can be charged with 10 watts, the charger is supplied by the manufacturer in the box.

The tablet can be ordered from December 21 to December 25 at a discounted price of $140 (HUF 58,250) from the manufacturer’s official Aliexpress website.