Recently, Samsung confirmed that some smartphones should receive the One UI 4.1.1 interface via an update. However, what the manufacturer had not yet said is that this software will be based on Android 12Lwhich was developed for tablets and foldables.

The detail was discovered thanks to the listing of the “One Hand Operation Plus” app on the Play Store, and the app description makes it very clear that the new version 5.3.31 was designed for “One UI 4.1.1 based on Android 12L” .

As expected, the software will be present in the new Galaxy Z Flip 4 and Z Fold 4, and this is an unprecedented change for Samsung’s foldables.

Launched by Google with a focus on larger, foldable screens, Android 12L improves user experience by adopting a number of custom features. An example of this is the new taskbar designed to make switching between applications easier.

In addition, the system’s own keyboard adapts to the size of the display to facilitate typing, while the notification center becomes much more accessible.

For now, Samsung does not say when One UI 4.1.1 will be released, but we also know that the Korean company is developing One UI 5.0 in parallel.

Samsung confirms that it should distribute One UI 4.1.1 to some smartphones

Samsung has released One UI 4.1 alongside the Galaxy S22 lineup and has even been distributing this version of its proprietary interface to a number of eligible smartphones.

However, an official representative of the company confirmed that soon the members of the Galaxy Z line should receive a new update with One UI 4.1.1. The news was confirmed through a post on the official forum of the Korean brand.

The moderator did not say what fixes the new version of the software will deliver to smartphones, but he assured that new details should be revealed in the coming days. 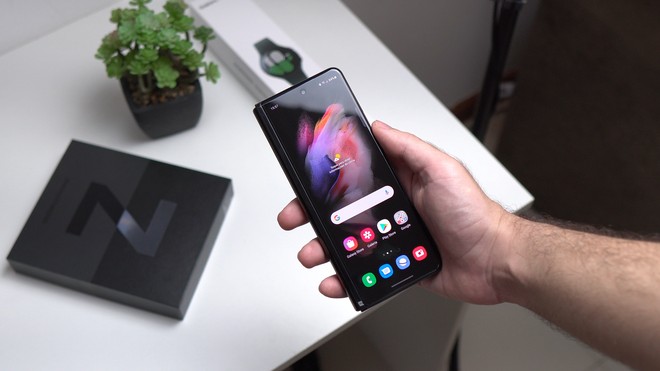 Of course, the release of One UI 4.1.1 is not really a novelty in Samsung’s software department, since the Korean brand ended up distributing version 3.1.1 of the software last year.

The announcement of the newest version does not affect the development schedule for One UI 5.0, as it is only expected to start development from July. That’s because Samsung has to wait for Google to publish the final version of Android 13.

As the details about One UI 4.1.1 are still scarce, we can only wait for Samsung’s next steps. It is worth remembering that the Korean brand has been testing version 4.5 in the option for smart watches.

Advertisement. Scroll to continue reading.
In this article:12L, Android, based, Foldable, smartphones, tablets

How to use Google’s artificial intelligence to solve math problems

realme C35 vs C25: duel of generations has advances and returns | Comparative

The realme C35 arrived to be a basic device with a series of differences in relation to the C25. The problem is that these...

Gillian Anderson would join the X-Men universe. (REUTERS/Mario Anzuoni) the universe of Marvel seems to be infinite. Every time there are new stories and...

Last Friday (1st), on its official forum, realme released the wide distribution of the stable update that brings Android 12 under realme UI 3.0...

Alarm apps for Android: getting out of bed will no longer be a difficult task

With these apps getting out of bed in the morning will no longer be an impossible task. Photo: Christin Klose/dpa Although all phones include...

Samsung S10 Lite receives update to One UI 4.1 with Android 12 in Brazil