Let’s start with the more modest of the two, the GeForce RTX 3050. Already present in the mobile segment, it finally lands on the desktop segment. While the rumors evoked 4 or 6 GB of GDDR6, NVIDIA has shown more generosity by equipping its entry-level 8 GB reference with GDDR6. 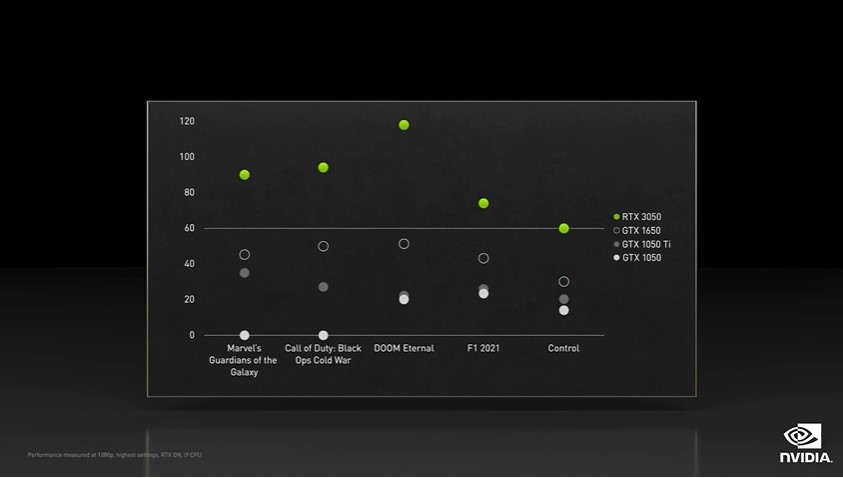 This GeForce RTX 3050 provides 18 RT cores and 73 Tensor cores, according to the presentation slide. In principle, from these values, the number of CUDA cores should be 2,304. However, NVIDIA refers instead to 2,560 in its press release. If so, the number of Tensor and RT cores are 80 and 20, respectively. For comparison, the GeForce RTX 3060 has 3,584 CUDA cores, 112 Tensor cores, and 28 RT cores. The latter is also better endowed in terms of VRAM, with 12 GB of GDDR6.

GeForce RTX 3090 Ti: the monster comes out of its lair

You were expecting it, here it is: the GeForce RTX 3090 Ti. There, there are no surprises as to the specs, which have been the subject of numerous leaks over the past few days.

No release date or pricing has been announced, but NVIDIA promises more information in the coming days.

Advertisement. Scroll to continue reading.
In this article:GPU, graphic, NVIDIA

“’Amores que deceit’ seems like fiction, but it’s so real”: Omar Fierro talks about his participation in this series

“Amores que deceit”, a production about toxic relationships and with surprise endings. (life time) Some weeks ago, lifetime premiere loves that deceive, its first...