It has been twenty-one years since iTunes and the iPod appeared, which promised that anyone could put a thousand songs in their pocket. From now on, those who subscribe to Apple Music music streaming can pocket a hundred thousand times more, as the number of records in the library available through the service has exceeded one hundred million. The company announced the news in a press release, in which they write that new songs from nearly twenty thousand artists from the 167 countries where the service is available are added to the catalog every day.

After the acquisition of Beats, Apple launched the Apple Music service in 2015 with a catalog containing 30 million songs, the first to be exclusive to the company’s own products. Since then, Apple Music has arrived on Android, Windows, WebOS, and Tizen, on Sonos speakers, Google Nest devices, and PlayStation 5, and last year, at the same time as Amazon Music, it was introduced that users can access ALAC-compressed music in the catalog without extra fees. (between 16-bit/44.1 kHz and 24-bit/192 kHz) lossless format. In addition, Apple’s own accessories support Spatial Audio surround sound, and Dolby Atmos, among other things. 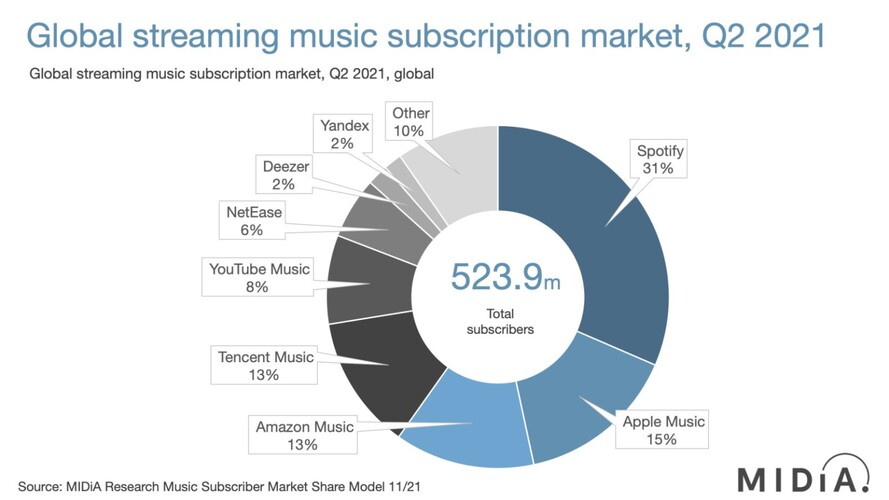 Distribution of monthly subscription music services by number of subscribers in the second quarter of 2021. (source: TechCrunch) [+]

Among its competitors, Spotify, the market leader in terms of subscriptions, offers 82 million songs and 4 million podcasts in its catalog, Amazon Music and Deezer both compete with 90 million catalogs, Tidal makes about 80 million songs available, and Qobuz offers 70 million songs. Finally, there is YouTube Music, which incorporates Google Play Music and mixes it with YouTube’s video catalog, with approximately 60 million songs.

What are the programs that Colombians watch the most on television?