Microsoft will no longer add new backward compatible games to Xbox Series S and Xbox Series X. Back on a project that has carried the brand for several years.

We can criticize Microsoft’s approach to video games on many subjects, but if there is one element on which we can applaud the firm’s effort, it is backward compatibility. For several years, Microsoft has offered free access to its old games on new consoles. From a slightly crazy project that carries within it the symbol of the comeback of Xbox, Microsoft announces the end of its program on the sidelines of the 20th anniversary of Xbox.

Xbox: You can play Game Pass games without downloading them

We learn in the columns of GQ the origins of this initiative. Between 2013 and 2015, Microsoft made the disastrous launch of the Xbox One and found itself without a vision for its gaming structure. Phil Spencer replaces Don Mattrick (and Marc Whitten who occupied the interim), and must rebuild the image of the brand. Long before the E3 2015 conference, recognized apostériori as year zero of the return of Xbox, Kareem Choudhry, the current head of Xbox cloud gaming, went to see Phil Spencer: “ I thought to myself: I thought about it, we don’t have the option to play old games on the Xbox One. I want to take a team of about 30 of our smartest people. We’re going to be working on it for a year, and it’s only at the end of the year that I’ll tell you if it’s going to work or not. “. Phil Spencer takes the bet and agrees to entrust the project to Kareem Choudhry.

Backward compatibility will finally be announced at the famous E3 2015 conference as one of the flagship measures of the “new Xbox” which listens to the demands of players. Six years later, the program must now end.

The backward compatibility program has become one of the pillars of the Xbox ecosystem. It allows on a list of compatible games to be able to play Xbox (2001) or Xbox 360 games on Xbox One, then now on Xbox Series S and Xbox Series X.

Better, Microsoft offers improvements for certain titles such as increasing the definition or improving certain assets. So the best version to date of Final Fantasy XIII or Red Read Redemption 1 happens to be the Xbox 360 versions played on an Xbox One X or an Xbox Series X.

All of these functions are free if you already own the games. In Demat, all you have to do is redownload them, and on a disc, you just have to insert the disc into the console so that it can download the backward compatible version of the game.

The end of backward compatibility with the last 70 games

At the Xbox 20th anniversary event, Microsoft unveiled a new list of 70 games added to titles compatible with the new consoles. 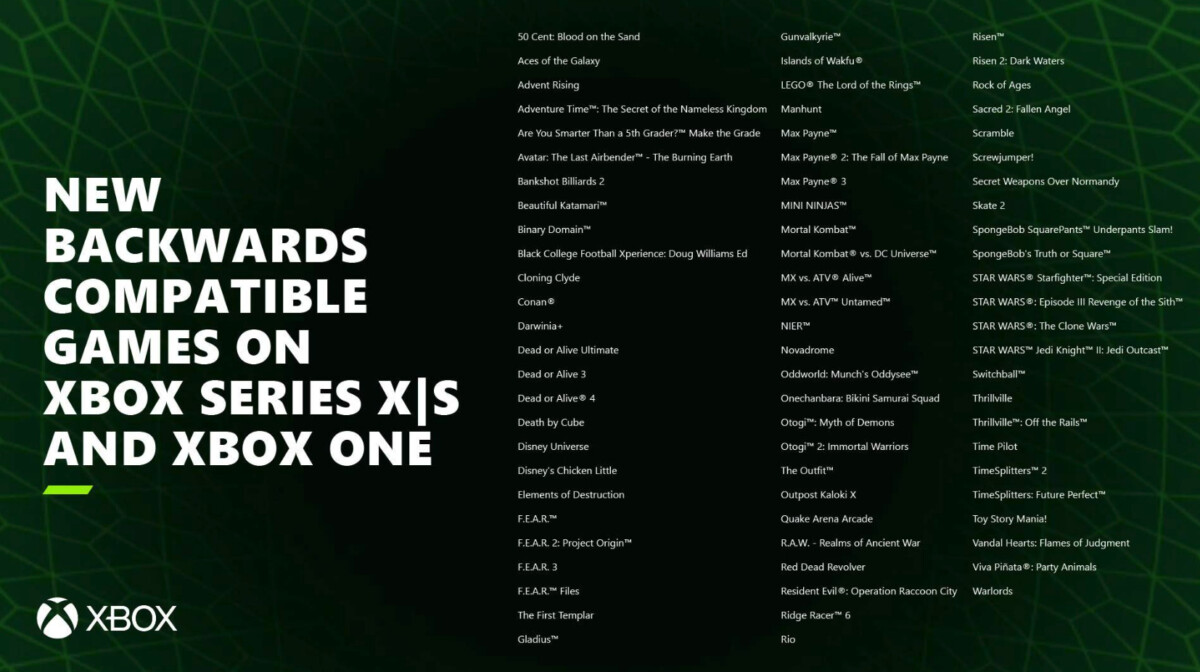 In addition to these 70 titles, 37 games now benefit from the FPS Boost function and in particular several titles of the Xbox 360 for the first time. The FPS boost feature has been reserved for a few Xbox One titles until now.

While we continue to focus on preserving and enhancing video game art, we have reached the limit of our ability to bring new games from the past to the catalog due to licensing, legal and technical constraints.

Microsoft should therefore continue to improve games with tools like FPS Boost, but will never add new games to the list of backward compatible titles again. The firm points to technical constraints, but also, and above all, licensing and legal constraints. It is often necessary to find out who owns the rights to a game, especially when the development studio or the publisher has since closed. It is also necessary to take care of the different licenses: musical obviously, but also the different rights of use. assets or engines and tools of all kinds. This very complex task now seems insurmountable for games that have not found their place in the program.

Let’s face it, we would now like to see Sony and Nintendo embark on similar adventures to improve the preservation of console history since the NES and the first PlayStation.