Though Mastodon It is not necessarily the only natural destination for emigrants from Twitterthe spectacular growth it has had in recent weeks seems to reveal a clear preference for this network, in which even former Twitter employees have found refuge and set up their own instance.

It is also true that the exodus is not without its penalties, since Mastodon is not Twitter, and both the design of software as the culture of each network respond to conflicting philosophies.

Mastodon is an implementation of the ActivityPub protocol for the management of a service microblogging (category to which they belong, for example Twitter and Tumblr), whose open code allows its installation on any web server (which constitutes a instance). Mastodon is also the network of federated instances and finally a registered trademark of Mastodon gGmbH, a non-profit organization run by eugen rochkocreator of software and administrator of the original server.

While Twitter is easy, Mastodon is frictionless by design. Twitter is managed centrally, with software owner, is a publicly traded company that sells advertising (and identity verification) and in which algorithms have taken ownership of the user experience.

Mastodon, on the other hand, works in a decentralized way, with software free, has no advertising and there are no algorithms that alter the timeline of the user.

It is not recommended to close the accounts, it is preferable to keep our identities and brands busy in that network. In addition, the profiles are the ideal place to share the links to our new destinations.

4. Why is Mastodon playing now?

Without leaving the Twitter account, it seems reasonable to have a plan B in case that network implodes or goes bankrupt. There are many users who have taken the opportunity to return to their accounts tumblr and there is also a growing activity in Instagram.

It is inevitable to go to Twitter as a reference to explain Mastodon, but not only because of this crisis but also for historical reasons. Mastodon was born in 2016 because a Twitter user left the network disenchanted with its inefficiencies. This is how Eugene Rochko designed Mastodon inspired by Twitter but willing to reverse all its structural failures.

For this reason I have affirmed that Mastodon is the answer to the question: what would Twitter have been like if it had been developed by the free software community?

5. With what criteria should an instance be chosen?

Choosing an instance (server) of Mastodon is, in part, similar to choosing an email provider: our identity is linked to the brand of the chosen platform (Gmail, Yahoo! Mail, AOL Mail or Outlook) and, with Regardless of what our option is, we will be able to communicate with the users of all the others.

In Mastodon there are generic instances (which are the most saturated) and there are thematic instances based on countries, regions, cities, languages, professions, disciplines and hobbies.

Other issues to consider when selecting an instance are:

The good news is that Mastodon accounts are perfectly transportable between instances, so there is always the possibility of moving to another server (preserving the community of the account, even if the content remains on the old one).

6. How to find our contacts?

Paradoxically, the most direct method to find out if our contacts are on Mastodon is to check their Twitter profile, since that is where the identity signs corresponding to Mastodon are being indicated.

One of the factors that has convinced me of Mastodon’s potential for networking The academic and popularization of science is the wide diversity of scientific specialties that have hundreds, if not thousands, of representatives grouped into perfectly identifiable communities: Anthropology, Archaeology, Astrophysics, Bioinformatics, Biophysics, Economics, Chemistry, Communication, Criminology, Law, Digital Humanities, History, Neuroscience, Psychology, Sociology, etc. In Mastodon, a treasure awaits each investigator. 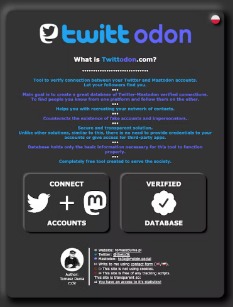 7. How is our identity verified on Mastodon?

In Mastodon, there is no centralized verification of user profiles (Twitter’s blue emblem), there is only verification of the links that the user includes in his profile (up to four) and only to the extent that the owner of the account can include a line of HTML code (available in your profile) in the HTML file of the page to which the link points. In this case, the corresponding link will appear in green, indicating that it is verified.

There is a very interesting service called Twittodon that allows cross-verification between a Twitter account and a Mastodon account and generates a link that, when added to the profile, confirms that correspondence and appears in green. Twittodon also offers access to a database of verified matches that can be used to locate the Mastodon accounts of Twitter users.

8. How is our identity communicated publicly on Mastodon?

When we communicate our presence on Twitter to a friend, we can say “find me on Twitter”, since knowing our name can carry out a very simple search in the internal Twitter search engine. Instead, saying “I’m on Mastodon” is the equivalent of saying “I have email”: there’s no way to locate you if you don’t indicate which server you’re on.

Outside of Mastodon, on any website, blog or social media account, the correct way to communicate identity is through the account URL. If, on the contrary, you communicate through the username (@[email protected]), the browser will interpret that string as if it were an email address.

9. What characteristics does writing have in Mastodon?

The second defining characteristic of Mastodon writing is the need to make heavy use of tags (similar to the content discovery logic that operates on Instagram) so that posts transcend the border of content. timeline local (something that is also achieved by having followers from remote instances) and reach Mastodon users who do not follow us but are tracking the tag in question.

10. What reliable information can I consult about Mastodon?

The official source, which should be explored in depth, is Mastodon Documentation and a highly recommended guide is Fedi.Tips.

The developer’s account software Mastodon original Eugen Rochko can be seen at mastodon.social/@Gargron.

Finally, as I have already confessed, those users who are willing to overcome the obstacle course that joining Mastodon represents and learning its techniques and its culture (unlearning part of the inherited ones) will find themselves in an environment that, to the old rockers of the internet, brings back memories of Usenet communities, the early days of the Web and, of course, the blogging revolution.

*The author is a professor of Multimedia Communication and Digital Strategy, University of Navarra

Originally Posted on The Conversation