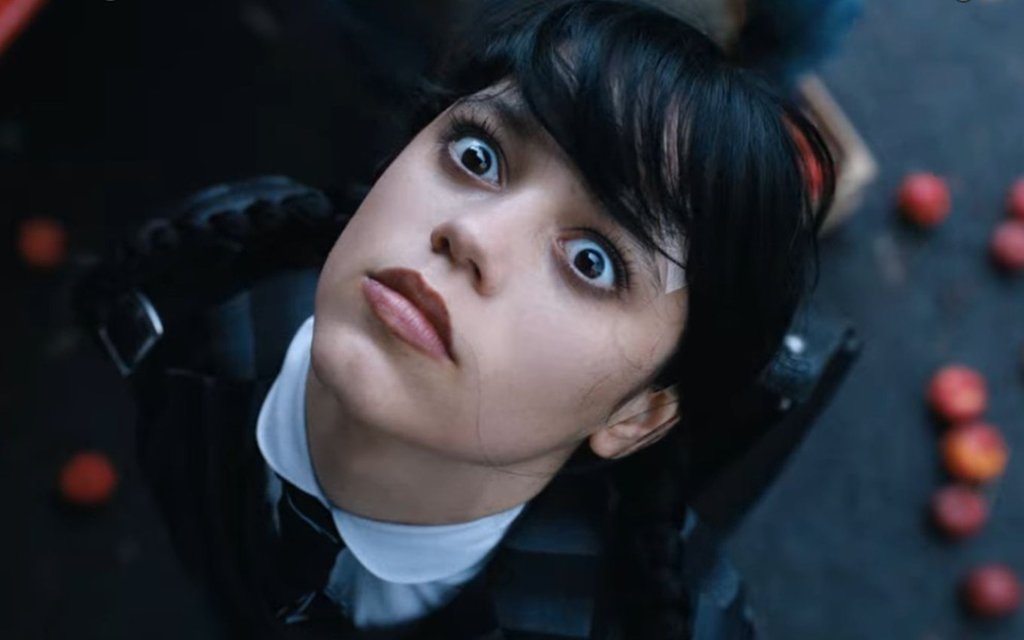 Two weeks after the premiere of the series Wandinha on Netflix, one thing was clear: the streaming service nailed it with the production. Created by Alfred Gough and Miles Millar, the work was directed by Tim Burton and featured actress Jenna Ortega in the lead role. And, speaking of the artist, her performance has been one of the most praised elements of the series.

At just 20 years old, Ortega already has an enviable resume, having participated in important Hollywood productions. With that in mind, we’ve separated 6 productions, in addition to Wandinha, in which you can see the actress in action!

One of Jenna Ortega’s first career roles was in The Middle Sister. 🇧🇷Stuck in the Middle🇧🇷, a television series on the Disney channel, which aired between 2016 and 2018 and had three seasons. The actress was only 14 years old when she joined the work.

Ortega played the character Harley Diaz, the main character of the series, which accompanied the young woman navigating through the turmoil of being the middle child in a family that had no more, no less than six siblings.

Following her path in television series, the Wandinha actress was also part of the cast of Jane, The Virgin. The series had five seasons in total and was shown between 2014 and 2019. In the work, Ortega lived the younger version of the protagonist, played by Gina Rodriguez, and appears in 30 episodes.

The curious story of the series shows a religious and “pretty” young woman (Rodriguez/Ortega) who appears pregnant after an artificial insemination is performed in a completely accidental way.

Another important production in Jenna Ortega’s curriculum is the movie The Fallout, original from HBO Max. Scripted and directed by Megan Park, the feature, released in 2021, features the Wandinha actress as the protagonist alongside Maddie Ziegler and won 5 international awards, including categories at Palm Springs festivals, SXSW, among others.

“Life After is a film about the unseen faces of tragedy, about those who cannot turn their pain into positive things in the world because they are too afraid to leave their rooms. Three teenagers form a unique and dynamic bond as they navigate through a non-linear and confusing journey of healing in a world that seems to have changed forever,” reads the synopsis on the IMDb website.

One of Netflix’s biggest recent hits is the series You (You), which debuted in 2018 on the streaming giant. Currently, the series has three complete seasons and is about to launch its fourth part, which will be divided into two waves.

In production, Ortega participated in the 2nd season in the skin of the character Ellie Alves, who befriends the character of Joe (Penn Badgley) without knowing that the man is an extremely dangerous murderous stalker.

Entering the area of ​​blockbuster films, Jenna Ortega was also part of the Marvel Cinematographic Universe (MCU) when participating in Iron Man 3. Released in 2013, the work was one of the first major productions of the young woman on the big screen and featured big names , such as Robert Downey Jr., Gwyneth Paltrow, Guy Pearce and Don Cheadle.

In her debut in the great world of superheroes, the actress played the daughter of Vice President Rodriguez, played by Miguel Ferrer. At the time, Ortega was only 10 years old. Not bad for starting your career, right?

Now, one of the most recent and most successful films of Ortega’s career: Panic 5 (Scream). The new film from one of the most recognizable horror franchises in cinema history brings back the iconic killer Ghostface, who continues his bloodthirsty hunt for the young people of the city of Woodsboro.

In the plot, Jenna Ortega plays Tara Carpenter, the younger sister of Sam Carpenter, the protagonist of the work that is lived by Melissa Barrera. With the confirmation of Scream 6, it seems that Ortega should return to the slasher franchise very soon. In 2023, to be exact, when the movie will be released.

In addition to Scream 6, the young actress will star in the films Finestkind, a drama that is already in post-production, and Miller’s Girl, a dramatic comedy that is in the process of filming. Fans also hope to see her in a possible 2nd season of Wandinha, on Netflix, which has not yet been confirmed by streaming.