Yesterday was a rich day for Intel which, in addition to the Intel Core 12th gen Alder Lake HX processors , during the “Vision” event unveiled other interesting news regarding the notebook / mobile segment. There is talk of the imminent future and next generation processors, in detail of ” Meteor Lake “, a name that identifies the 14th generation of Core CPUs that will follow Raptor Lake (Core 13th gen) which will arrive this fall.

After the announcement last October, concerning the first ignition of an Intel Core 14th gen chip , the Santa Clara company goes to the facts and shows a preview of what will essentially be the “dies” of the Meteor Lake Mobile models and that, according to as reported by PC-Watch , it will come in standard and high-density package variants. 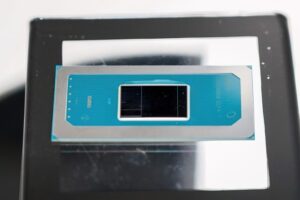 Intel has already confirmed how Meteor Lake will use a multi-tile design , in detail we talk about Core IPs that will be produced by both Intel and TSMC which, probably, will provide the integrated graphics component based on Intel Arc architecture in the new T-GPU design (tile-GPU). From the images above we note how the high-density package variant will be composed of at least 4 tiles which, in turn, will be able to integrate additional tiles (especially from a GPU perspective). A substantial difference between the Metor Lake chips and the current Alder Lake Core 12th gen lies in the PCH which, on the next generation, will be integrated directly into the die thanks to the new design.

The 14th gen Intel Core processors will be produced on Intel node 4 (7nm to be clear) and should guarantee a 20% increase in performance per watt; the tape-out phase is already scheduled for the second half of the year with the first products expected for the first part of 2023; therefore we do not exclude seeing the first Metero Lake notebooks already at the next CES in Las Vegas .

Airbnb: The three changes to making reservations around the world