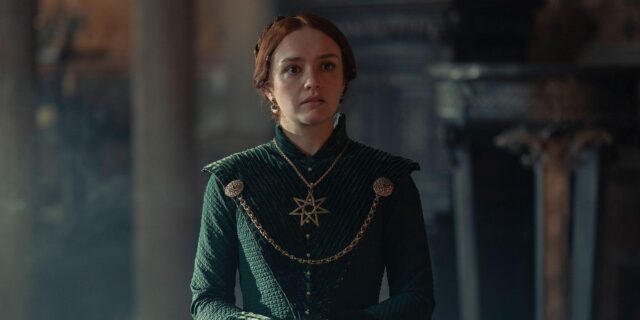 The first season of House of the Dragon reached its conclusion at the end of October, but it still continues to yield many subjects given the great success of the audience and public. The ball this time goes to actress Olivia Cooke, who went on to play the then-queen consort Alicent Hightower in her adult phase.

By the way, next, we’re going to get into spoilers for the series, okay?

During an interview with the Hollywood Reporter, the actress who replaced Emily Carey in the role of the villain said that her most difficult scene to record occurred in episode 8when your character had to cover up a rape committed by your son, Aegon Targaryen (Tom Glynn-Carney), against the royal servant Dyana (Maddie Evans). Check it out in the words of the British actress:

“In episode eight, the scene with Dyana, where she tells me that my son raped her… I had to hit Tom really hard. And Tom, being Tom, said to me, ‘No, just hit me.’ On the first try, I hit him on the chin, and he said, ‘no, really hit me,’ and I really got to the point where [o golpe] echoed throughout the hallway, and my hand suddenly had a heartbeat,” Cooke said.

She further concluded: “Fortunately, the camera was on Tom, and I was completely removed from the scene. [porque eu estava] trying to suppress a really weird laugh. God knows what it did to his face. […] We just did it once or twice. But it was like, ‘Oh my God, don’t mess with you.'”

Cena was considered one of the most impactful of the season.Source: HBO/Playback

Heavy, huh? What did you think of this scene? Missing House of the Dragon already? The second season should be released in mid-2024. Until then, keep following Minha Série so you don’t miss any news!