Google has introduced new features and functions to its video calling service Meetwith the aim of improving and facilitating the experience of the remote work through Workspaceas indicated by Aparna Pappu, vice president of that product of the company.

These modifications and improvements come due to the current need of companies to establish themselves in an environment of hybrid work in which attendance is not the only way to promote productivity among the workers.

In that sense, Google seeks that the app Meet, as a platform dedicated to video calls, becomes the source of close connection between coworkers. “We generate those new experiences that generate immersive connections so that video calls connect as much as a face-to-face meeting”, is indicated in a statement issued by the company.

One of the first novelties regarding the operation of the application of Meet is that of presenter focus in slides, which will allow users to make presentations virtual overlaying your video to the content of the presentation so that the exhibitions be more dynamic.

According to the company, this feature is not yet available to the public, but it can be used from next year on work environments.

In addition, a new system of adaptive approach which works through cameras integrated with artificial intelligence. This feature will allow the system to google-meet recognize when a person in a group is speaking so that you can focus directly on them to identify them correctly.

In some devices, this feature will be present later this year and in others it could appear throughout 2023, as indicated. Google.

An additional feature that was added in Meet also consists of an additional screen that can be activated from the mobile devices of those attending a meeting, from where you can participate through a chat that it would no longer appear to the side of the main meeting screen in Google Meet.

Although no official release date has been set, the business indicates that this could arrive in early 2023 for users.

For people who need to handle large amounts of information and they have to do a job audio transcript to text, Meet will also integrate a function that will allow this activity to be carried out automatically. 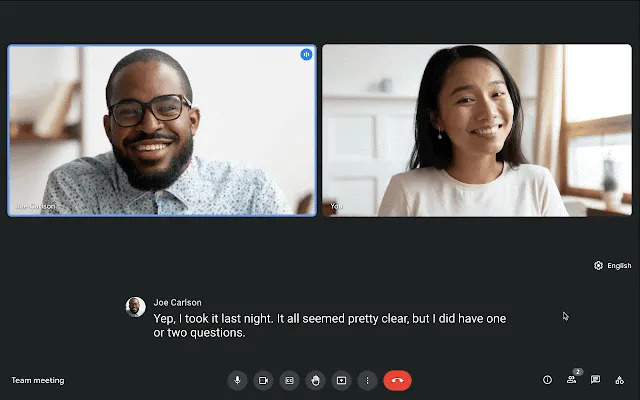 Google Meet has already enabled subtitles in some languages ​​for its video calls. (Credit: Google)

Although the english transcription will be released to users this week, other languages ​​such as German, Spanish, French and Portuguese will not be available until 2023 at an unconfirmed date.

In a more aesthetic section, Meet will have a function dedicated to frame the videos of conference participants before they join the conference. This feature will also allow manual framing at any time during the meeting.

According to Google, a functionality to “increase the confidence of the exhibitors” consists of allowing people to see who they are speaking to while jumping between presentations. slideshow. This feature will be available starting this week on Meet.

Although emojis will only be available to users later this year, threaded conversations will appear as a feature later this month for users.

Discover the 10 worst horror movies in the world

10 Actors Who Have Twins And You Didn't Know