Gigabyte has launched the NVIDIA CMP 30HX mining card. As you know CMP is the acronym for “Cryptocurrency Mining Processor”, which is a bit of the green giant to provide their own dedicated graphics for the cryptocurrency mining part.

The new Gigabyte’s model is the first of its kind. Its creation was based on NVIDIA CMP 30HX D6 6G. Graphic companies announced the four solutions for crypto mining. These solutions are NVIDIA CMP 30HX D6 6G. It can mine Ethereum at the rate of 26 MH / s, a TDP of 125 watts, and uses an 8-pin connector to provide additional power to devices with installed PCIe slots.

GIGABYTE’s famous WINDFORCE 2X has improved its cooling design, including two large 90mm blade fans that rotate back and forth to reduce turbulence and increase air pressure, and a composite copper heat pipe that also covers the VRAM with a metal plate.

Alienware M15, another gaming laptop that is based on AMD Ryzen processors.

Gigabyte provides the best power phase design to the graphics card so that the MOSFET can operate at a lower temperature, and the overheat protection design can balance the load on the regulator. The installed capacitors and coils have passed the “Super Durable” standard certification. 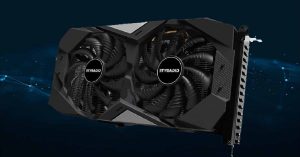 In short, it is expected to provide efficient heat dissipation and increase its life while maintaining performance. Although the warranty period provided by Gigabyte is only three months, this is essential, considering that this type of card is designed to work 24 hours a day, 7 days a week without interruption.

NVIDIA CMP 30HX mining card has no video output The dedicated memory of this graphic card is 6 GB GDDR6 on a 192-bit bus with a bandwidth of 14 Gbps. It can be used with other NVIDIA CMP cards or with a single CPU. It is suspected that the graphics core used is a consumer GPU that does not reach the required level. While NVIDIA’s business is clear, it doesn’t have to be bad for crypto cards. In the absence of graphics and other components, it should help improve the offering.

Gigabyte has “skyrocketed”, but there will be quotes from other manufacturers in the near future. Regarding the basic version of these “cryptocurrency mining processors” and three other outstanding features.

Officially the company has not announced the price of this Gigabyte NVIDIA CMP 30HX mining card. But this will never be cheap because there are rumors that the manufacturer’s suggested retail price is $720. And there is only a three-month warranty. But this is a career field that must be covered.

On the bright side, the “normal” graphics miners have used so far can be used for gaming or used with our PCs to complete the tasks they designed, increase inventory, and lower prices that are currently impossible to achieve. If you don’t really need a market, you can forget about buying charts. Don’t even think about secondhand ones unless you’re sure they haven’t mined yet.