Unlike Alok, Thiva and Dimitri are two newer characters in Free fire, which were introduced in August 2021. All three characters are inspired by real-life DJs and their abilities revolve around recovering HP.

Alok is the character of Free fire most famous and is quite popular due to its powerful active ability. Let’s compare the abilities of the three characters to determine who should be chosen to rise through the ranks in 2022. We have compared Free Fire: Thiva vs Dimitri vs Alok below.

Free Fire: guide to get the Winter Soldier package from Magic Roulette

Alok’s active ability is called Drop the Beat, which has a 45-second cooldown. The ability creates a 5-meter radius aura that increases player movement and running speed by 10% while providing HP recovery of 5 HP per second for 5 seconds.

Thiva has a passive ability called Vital Vibes, which increases players’ assist speed by 5%. After a successful rescue, Free Fire players can recover up to 15 HP within 5 seconds.

Like Alok, Dimitri is also an active Free Fire character. His ability, Healing Heartbeat, is capable of creating a 3.5 meter zone where players and their allies can recover after being knocked down. They can also recover 3 HP per second for 10 seconds within the radius of this ability with a cooldown of 85 seconds. 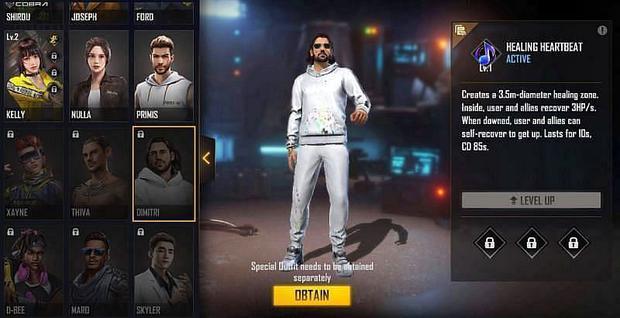 FREE FIRE | Best of the three

Alok is a better option compared to Thiva and Dimitri when it comes to moving up the ranks. Unlike the other two characters, the ability of the first not only helps with HP recovery but also allows players to increase their movement speed and speed, which is quite useful on the battlefield.

Thiva’s ability is only suitable for party / Clash Squad matches, so in the case of a solo rank push, either Dimitri or Alok should be used. When comparing Dimitri to Alok, the latter’s ability is more powerful and has a shorter cooldown time.

Free Fire: guide to get the Princess of the Dune bundle in the Gold Royale

What do you think about Free Fire: Thiva vs Dimitri vs Alok ? let us know in the comments.