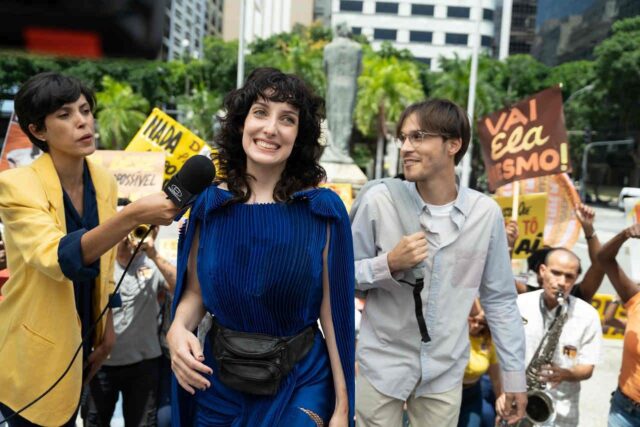 There is a recurring phrase on stickers spread across Brazil that says that “politics should not be a profession”. As much as there is a reasoning that, on the surface, seems logical, this is a phrase that unites a praise of anti-politics, that is, the idea that our social problems stem from the fact that power is centralized in the hands of those who live from it.

The opposite attitude to this would be for governments to end up in the hands of indignant, righteous people, seen as more “frank” and “transparent”. The result of defending this is already known to all – and it is not a good one. I think this is the premise behind electedBrazilian series available on Amazon Prime, written (together with Célio Porto) and starring Clarice Falcão.

The execution of this idea, nowadays, may even seem obvious, but it is worth remembering that this is a series conceived five years ago – that is, before the Jair Bolsonaro phenomenon reached the Plateau or the election of Volodymyr Zelensky in Ukraine (before it was elected, Zelensky was a comedian and starred in a series in which he assumed the presidency of his country).

The original issue of Elect, then, is less the premise and more the execution. Clarice embodies Fefê Pessoa, one influencer fingerprint of lifestyle (or “mad life”, for those who prefer) who is running for governor of Rio de Janeiro and, to everyone’s astonishment – ​​including herself – she became the winner of the election.

Obviously, we soon discover that there are several fingers of the old politics behind this election: a good part of this victory was articulated by Netinho, a deputy played by veteran Diogo Vilela. Coming from a lineage of parliamentarians, Netinho is the guy who tries to “tame” Fefê so that she behaves at least as someone capable of political articulation with the other members of that environment.

But Fefê, of course, is indomitable. The character clearly drinks from other influences, such as Selina Meyer by Julia Louis-Dreyfus in Veep or the iconic Michael Scott, the office manager played by Steve Carell in the seasons of The Office🇧🇷 In common, all these characters centralize the same archetype: that of incompetent people who came to power by chance.

There is another important aspect in common between Fefê and them: although they are full of negative nuances (Selina is racist, homophobic and superficial; Michael is selfish and self-centered; Fefê is completely immature), they are characters designed to create some connection with viewers.

Not to mention that, even though Fefê is absolutely inept at politics, her taste for life and worldly pleasures (such as sex, parties and light drugs) make it very easy to identify with her.

A dystopia in Rio de Janeiro

The differential of Eleita in relation to its “competitors”, obviously, is the Brazilian context. And the scenario in which the series takes place is not chosen by chance. Here we are in front of someone who takes on the extremely difficult task of governing Rio de Janeiro, a state in which several forces meet and dispute territory.

The pomp and tradition linked to this important state appears in a neat setting, using real spaces as locations, such as the Legislative Assembly, the Palácio das Laranjeiras and the Palácio de Guanabara.

This is essential to set the tone expected in Eleita, which creates a kind of dystopia that mixes elements of the real with a discourse that confuses what actually exists in Rio and what is being imagined.

Past and present collide in a story in which the banter of Fefê and his friends are placed side by side with the banter of Rio de Janeiro politics🇧🇷 And the great fun of the series is precisely in between the lines, in the jokes that arise and are picked up only by those who are familiar with the context.

I bring some examples. In one of the funniest episodes, there is a Carnival ball, and each character comes up with a costume. Fefê’s, a bit crazy, resembles something like a digestive system. Her “boyfriend” (actually, a guy she “picks up” on lonely nights, but who is elevated to “first lady” in order to bring some seriousness to the governor’s figure) goes to the party with a suit pink identical to the one the iconic Jackie Kennedy, wife of American President John F. Kennedy, wore when her husband was assassinated at her side.

But the touches of “carioquês” are what bind this episode together: advisor Netinho’s costume is just a napkin on his head. It refers, therefore, to the episode of the “napkin spree”, a luxurious dinner given by the then governor of Rio de Janeiro, Sérgio Cabral, in Paris, in 2009. The event cost R$ 1.5 million and became a symbol of the administration corruption of the Cabral era.

Fefê’s crazy ideas also make interesting comments about the direction that politics has taken in Rio de Janeiro and in the country. In one of her decisions, she decides to privatize the municipality of Nova Iguaçu, selling it to Amazon (a company that also runs Amazon Prime, producer of the series). The consequences, of course, are terrible – but I highlight here the audacity of criticizing, in some way, the sponsor of this attraction.

That doesn’t mean that Electa doesn’t also have its weaknesses. Personally, I missed a better contextualization of the story of Fefê Pessoa that led her to run for governor of Rio. The question “Tiririca” ​​(in the sense of a random person who decides to take advantage of his own popularity to get into politics) seems little outlined in the series, although it is understood that Fefê’s arrival in power was due to quite bold articulations of the “foxes” of the old guard.

On the other hand, I would highlight the strong supporting cast as Eleita’s greatest asset. Many actors and actresses who are emerging in current Brazilian comedy have small but relevant roles.

But there are several other relevant names in the cast. Get ready to see a cameo from the freshly pumped Diogo Defante as Fefê’s stoner friend. There is also Polly Marinho as the governor’s only sensible advisor, and Pablo Pêgas as an openly gay assistant who does not leave Fefê’s side.

In addition, Eleita features some of Clarice Falcão’s former colleagues in Porta dos Fundos, such as Estevam Nabote and Fábio de Luca. Finally, I highlight the veterans: Cristina Pereira, Diogo Vilela and Ingrid Guimarães show how much experience is also important to give life to a humorous text.

Since the series was imagined 5 years ago, I would say that there are certainly many themes that could figure in a second season of Eleda, which perhaps could focus more on the effects of the arrival of the extreme right in Brazilian politics. There will be no lack of material for the scriptwriters to imagine new confusions for Fefê and his staff🇧🇷