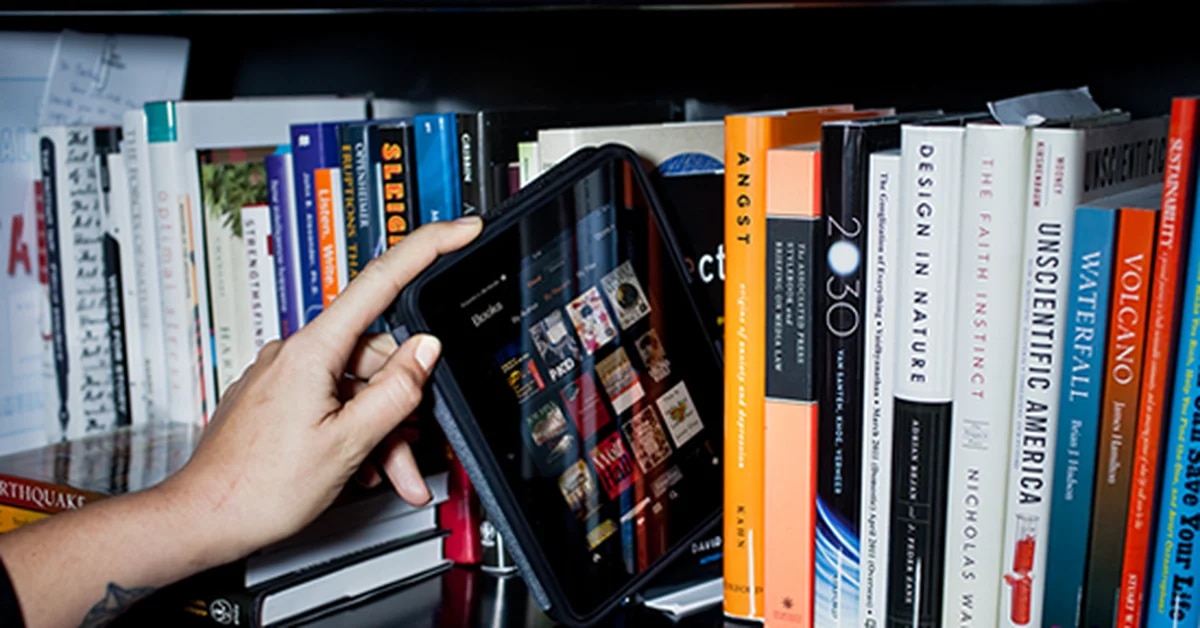 Although ebooks (e-books for its translation into Spanish) are not yet officially available for all educational subjects, it is only a matter of time; or so many believe because several schools and universities have offered to use the tool. Along with other developments technologicale-books can make it easier to organize lessons and study.

Nevertheless, there is also much criticism of the electronic format. In a world dominated by screens, young people can be affected by this constant influence.

In addition to being eye-catching, electronic books can be distracting in class. What is better?

Digital reading is a practice that is becoming more widespread every day, both in the adult population and among young readers. Convenience and portability are two of the factors that most influence the choice between reading on paper and digital or ebook.

But with the advent of screen reading also comes ignorance and superficial reading, according to some experts. Increasingly, both adults and students (school and college) pay less attention to detail than with a physical book.

It is because of that TechMarkup has made an analysis of the current situation of ebooks; both in schools and universities, and in the use of these electronic books in the daily life of any adult.

Javier Montoya, professor at the Business School of the University of Applied Sciences (UPC) and editor of 3 books of ‘Best Marketing Practices’ published at the UPC in Lima, Peru, told TechMarkup 10 advantages that ebooks have versus printed books in the universities and also, in the daily life of adults:

– Immediate availability: “without waiting, without leaving home”. Just a couple of clicks to buy them, download them and start reading.

– Accessibility: easy access not only to the book (through libraries, ebook search engines, electronic bookstores, etc.), but also to its content, in which quick searches can be made.

– Content management: paragraphs, sentences, dialogues can be extracted and saved automatically, as well as comments made “in the margin”.

– Interactivity: They allow you to link and consult other books, “such as dictionaries, without leaving the page you are reading.”

– Lightness: put aside the The weight of having several books on your back is no longer a burden, thus improving your health. “For example, in colleges and universities that use this technology, it is no longer necessary to carry a backpack with a thousand books, which seriously harm the composure of the back, even creating possible hernias,” says Montoya.

– Durability: “ebooks don’t get dusty, they don’t deteriorate, they don’t bend or wrinkle.”

– Space: they only occupy space in the memory of a computer, cell phone, laptop either tablets“and no longer on the walls of our house”.

– Ecology: the absence of printed paper prevents the felling of trees.

The new generations of Kindle (Amazon) continue to triumph and dominate the market despite the appearance of other electronic readers such as Kobo or the arrival of Manzana either Googlewhich also have private e-book purchase services to read on a device.

The most popular are those of amazonbut they are not the only ones on the market.

In Perufor instance, ebooks are already a reality in all universities in the country. Also, some schools are implementing this technology to benefit student learning.

“The digital format offers an effective possibility of accessing books more easily in places where there is not much editorial production and there is no easy access to books. I am convinced that digital libraries are part, not of the future, but of the present of libraries”, Alejandro Neyra, former director of the National Library of Peru (BNP), told TechMarkup.

It is valid to know that ebooks stand out for having a low price that does not usually exceed USD $ 100facilitating technology to be implemented in educational institutions with devices such as Woxter, Energy System, Kobos or Tagus (in the case of Peru).

Montoya mentioned that these four devices, along with Kindle, are the most popular on the market, the latter being the most used in Peruvian universities, having “pretty much all the same characteristics”:

– Internal storage for thousands of books.

– Batteries capable of lasting a year or two weeks without charging.

Where more e-books are being read in Latin America

Likewise, a study prepared in March 2022 by the Regional Center for the Promotion of Books in Latin America and the Caribbean (CERLALC) revealed the ranking of electronic reading in Latin America. According to data from the entity, Argentina Y Chili are the countries that read the most with 5 ebooks per person on average per year. follow him Mexico (3.4), Colombia (2.7) and Peru (1,2).

The study also concluded that Chile and Argentina are the countries that spend the most on a monthly payment of elibraries. They are followed by Peru, Mexico and Colombia.

The figures also show that women are the ones who generally buy more ebooks. 58% of buyers in Argentina are women, 55% in Mexico and 53% in Colombia. In Peru, men lead with 52% of purchases.

In terms of age, ebook consumers tend to be between 30 and 40 years old on average. Except in Peru, where users are between 40-45 years old and in Argentina 45-50.

Man reading an ebook on a device. (photo: Androidphoria)

Electronic libraries have earned a place in the world

Likewise, and adapting to the times and complementing the ebooks, the elibraries (electronic libraries)a kind of Spotify either Netflix from which users can get unlimited books in exchange for a monthly price.

“They have become popular in recent years, as there are more and more services and platforms that offer options adapted to the needs of users,” says Neyra. For example, These are some elibraries from some countries in Latin America:

The debate about which of these media is better revolves around the difficulty of concentrating and understanding the text. Clearly, employing this technology in universities is, by far, a great solution (for all the advantages that Montoya mentioned). But the picture is not the same in schools.

Many studies have attempted to address these issues and resolve the controversy of using electronic books or print media in schools. However, the answer is neither simple nor certain, since both means have their own advantages and disadvantages.

A minor doing a homework with a tablet reading an electronic book. (photo: Government of Peru)

Therefore, experts recommend implementing a mixed pedagogical model in the classroom. This will allow children to adapt to reading on screens, taking advantage of the fact that printed books can retain more complex content.

“A combination of traditional methodologies with new technological resources could favor study in the classroom,” explains TechMarkup Silvana Arditto, Psychologist and teacher at the San Ignacio de Loyola Institute and the María Reina College in Lima, Peru.