As you well know, the month of october was the month of terror in cinema and streaming services because of Halloween. And that’s why several cool releases reached the screens and big screens for us to watch, including the film that is the subject of today’s text / video.

I’m talking about Barbarian (2022), or Brutal Nights, as the title was here in Brazil, which is one of the most interesting films of this recent batch of horror productions. The film also features actor Bill Skarsgård, who gave life to the clown Pennywise in the It franchise films, in addition to the already known Justin Long, who made Hungry Eyes and Drag-me-to-Hell.

But did this good cast help the film? Is it really worth watching Brutal Nights or are you just going to waste your time with yet another horror movie full of clichés? The answers to these and other questions you will know now, with my complete narrative and critical analysis of Brutal Nights!

What is Brutal Nights? (NO SPOILERS)

As always, let’s start with that quick summary of the movie’s plot so you understand what Brutal Nights is all about. Directed and written by Zach Cregger, Brutal Nights tells the story of the character Tess Marshall, a young woman who travels to Detroit to do a job interview.

However, getting there, right in the middle of a night of heavy rain, Tess realizes that the house she rented through Airbnb is already being used by someone else. Keith, Skarsgård’s character, is there and tells the girl that he also rented the house, but through another app. In other words, there was a lot of confusion with the bookings and the two ended up booking the residence on the same date.

As it is the middle of the night, raining heavily and the neighborhood is not the safest, Tess ends up staying at the house with Keith and, despite the girl’s suspicions, the two end up getting to know each other and even get along well. But this whole unpleasant situation, which already seemed to be bypassed, changes when Tess finds a secret door in the basement of the rented house.

From then on, new characters and mysteries emerge in the plot, transforming the narrative into a spiral of madness capable of leaving even the most forewarned with their jaws dropping. And I’m going to stop this first part here because, believe me, it’s impossible to continue writing about Brutal Nights from this point forward without spilling spoilers.

In Brazil, Noites Brutais is available to watch on Star+.Source: 20th Century Studios

WARNING: FROM NOW ON, THIS TEXT WILL CONTAIN SPOILERS FOR THE MOVIE BRUTAL NIGHTS. DO NOT CONTINUE IF YOU HAVEN’T WATCHED.

Analysis and review of Brutal Nights (WITH SPOILERS)

Very well, Brutal Nights is a very crazy journey and it is almost impossible for you to remain apathetic or indifferent during the film. And this is largely due to the unpredictability of the narrative, which seems to go one way for a certain time, but which throws you to another when you least expect it.

But let’s break it down to make it easier to understand why brutal nights it is a very interesting film. In the first act of the feature, we meet Tess, Keith and the problem with the reservation of the house, since the two rented the place at the same time. It is a relief to see how the narrative of barbarian wastes no time and already presents two of the main characters along with the first conflict of the work.

Because, let’s think about it: in a more “conventional” horror movie, it’s quite possible that the first act would start with Tess still outside Detroit, probably talking to someone about having to go there for a job interview, about having to rent a house, blah, blah, blah…

Do you see how this would already make the beginning of the film quite dull? It would basically chew up the narrative, organizing everything in the most linear and simplistic way possible, which wouldn’t do much for the viewer other than leave them with that horrible thought: I’ve seen this a million times before.

Thankfully, however, Brutal Nights already skips all that and goes straight to the point. From the beginning, therefore, the script has already trapped us through this first conflict and makes us believe that Keith can be someone dangerous and that Tess is not safe. After all, this story that there was a problem with the reservation seems a bit poorly told, which already leaves anyone with that little flea behind their ear about everything.

So that first act kind of trips us up and makes it seem like the movie is going to be just about Tess and Keith, with the guy being a potential murderer or kidnapper or something. Here we have the turning point for the second act of Barbarian, which is when Tess finds the hidden door in the basement of the house. That’s when absolutely everything changes, with the narrative opening up new possibilities, just when we thought we had already unveiled the production. 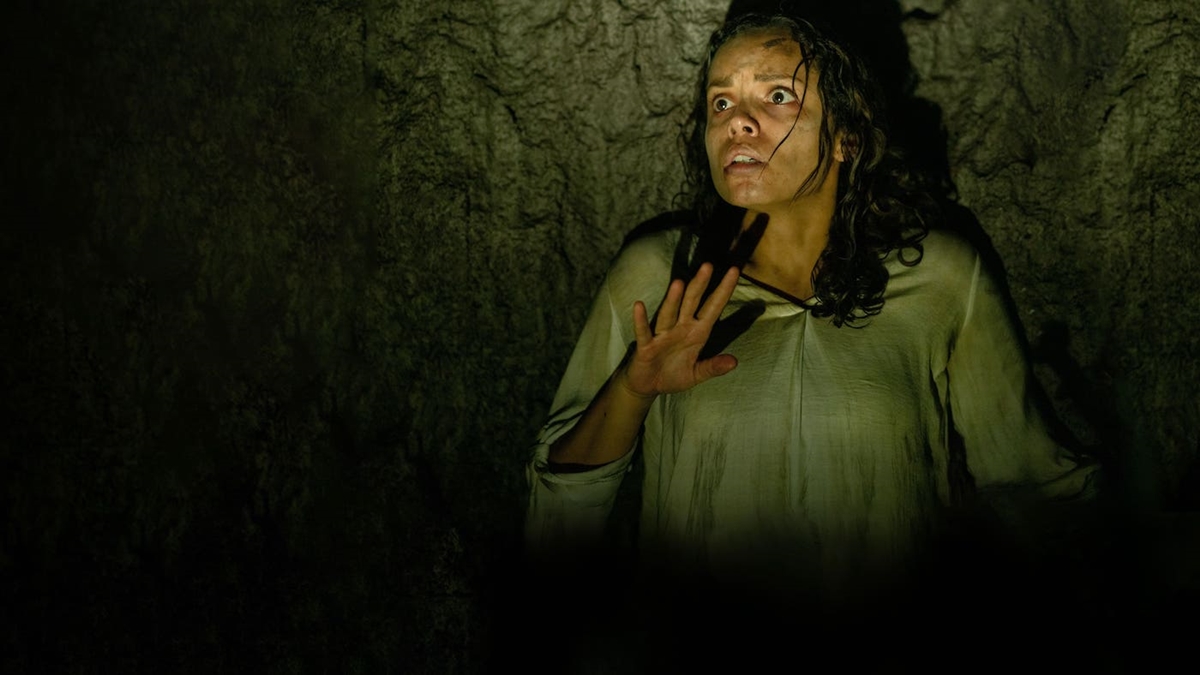 Barbarian gets it right by betting on a creative narrative, without too many clichés.Source: 20th Century Studios

The second act, incidentally, is one of the most interesting and creative I’ve seen in horror movies in recent times, narratively speaking. That’s because, at the same time that he soon shows us that Keith was innocent all along, and throws it in our faces that, deep down, we didn’t know anything, the character is still killed by the “villain” of the film (who, in fact, true, not quite a villain, but more on that in a moment).

And right after Keith’s death, when the narrative looks like it’s going to take off and give us all the answers, guess what? brutal nights picks you up, brings you back down to earth, and further expands the story with new characters and contexts.

Now, we meet AJ, who is played by Justin Long, owner of the infamous rented house, and Frank, who is responsible for the secret rooms in the basement and the real villain of the film, since he was the one who kidnapped women to keep prisoners down there.

These characters appear as new pieces of the puzzle of barbarian and fill in the gaps that the first act left. Which is really cool, because the narrative kept these cards up its sleeve to present only later, giving more dynamics and mystery to the story.

After showing us all this and practically tying the plot together, brutal nights moves into its third act through Tess’s escape from underground captivity. In this last part of the film, we even have some more interesting revelations that give even more depth to the characters.

Tess, for example, shows all of her good nature, which was there from the beginning, when trying to help AJ escape. And, by the way, AJ also has his bow well tied by betraying Tess and showing that, after all, he was nothing more than a coward of highly questionable morals, and that he was probably guilty of the abuse accusations he was facing. . Which makes him, by the way, one of the villains of the film, along with Frank.

In this sense, it is clear that the “monster woman”, in fact, was nothing more than a victim and, unfortunately, only acted according to what she knew. The ending, therefore, in addition to ending the film well, still proves that not everything is what it seems, and that monsters, villains and heroes are much more complex constructions than we imagine.

Summarizing, then, what I thought of the movie Brutal Nights for you:

The production surprised me a lot and really ranks among the best horror films of 2022. The work succeeds in the creative construction of its narrative and does not waste time with many clichés, also focusing very well on the arcs of its characters, which are capable of awakening so much empathy, in Tess’s case, and contempt, in AJ’s case.

Without a doubt, it’s a great choice if you’re a horror fan, but want to get away from hauntings and supernatural beings, since, in brutal nightthe great villains are flesh and blood.

What is the dusting attack and how does it affect cryptocurrency users?

The Honor Magic Vs comes with a stylus