Announced by surprise this morning, the Samsung Galaxy S21 FE arrives late on a smartphone in real boiling. It’s mid-range positioning also opposes it to real heavyweights, such as Google’s Pixel 6. We have compared Galaxy S21 FE vs Google Pixel 6 below in detail.

If we retain the Samsung Galaxy S20 FE as a very nice surprise, many other devices have since followed suit in this segment. It should also be remembered that the South Korean has fallen behind on his schedule because of the shortage of components. So many considerations which, in the end, are of little importance in the eyes of future buyers, but which allow things to be put into perspective. So, is it better to put your money in a Pixel 6 or a Galaxy S21 FE?

The Google Pixel 6 is cheaper

Let’s start with what is obviously the most important: the price. We won’t beat around the bush for too long, Google’s smartphone is much more affordable than its competitor. Displayed at 649 euros, it saves exactly 110 euros compared to the Samsung Galaxy S21 FE, sold at 759 euros.

Of course, the game of promotional periods or various refund offers could turn in Samsung’s favor. But, as it stands, the Pixel 6 remains more accessible.

If there’s one thing the Pixel 6 doesn’t have going for it, it’s its design. Rather coarse, it leaves ugly borders around its screen and displays a thickness and a weight much greater than the S21 FE even though the diagonal of the screen is 6.4 inches in both cases.

However, it should be remembered that Samsung has been opting for a plastic back coating for several years, where Google offers its Pixel 6 glass. This partly explains the fatness of the latter and also gives it a slightly more “premium” aspect. 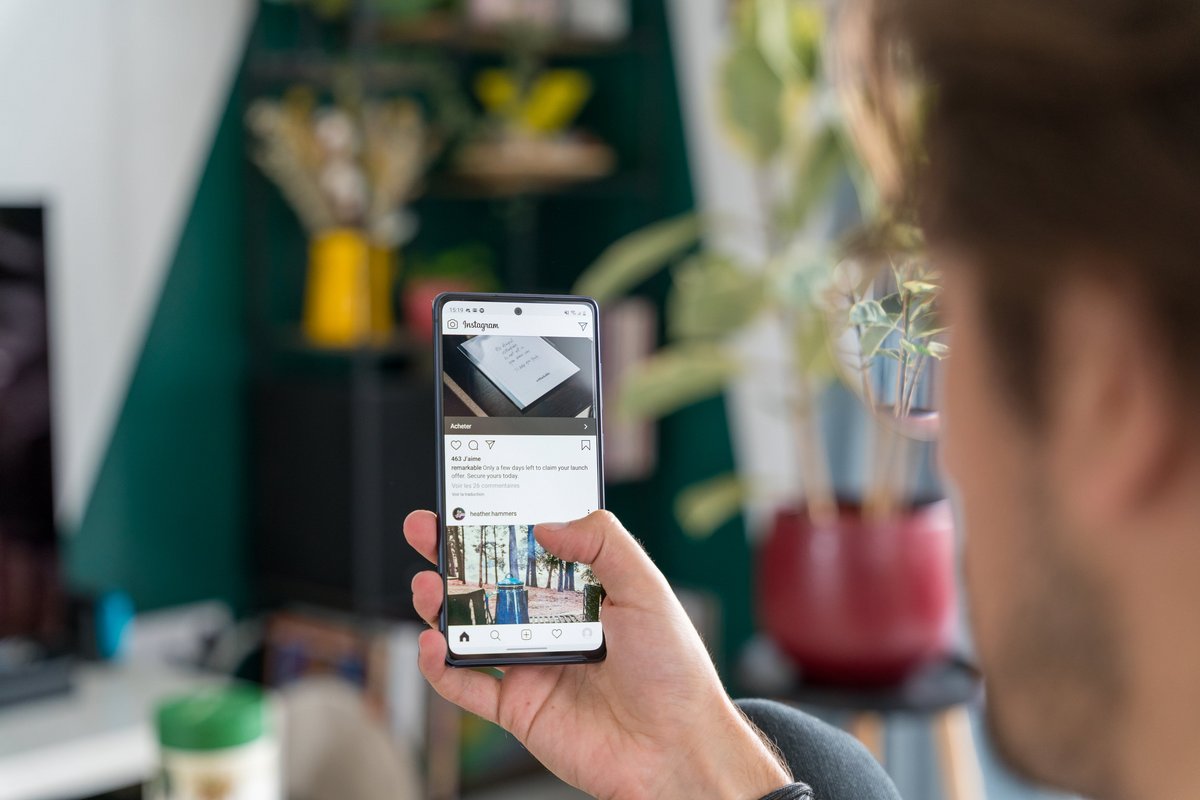 Note that when it comes to durability, both smartphones are protected by Gorilla Glass Victus and are IP68 certified to withstand immersion or splashing.

The Google Pixel 6 makes better photos … in some cases

The match is over. This year, Google made its revolution and finally offered its Pixel 6 a brand new photo sensor. Backed by the Tensor chip developed in-house, it offers simply dazzling photos, and above all of as good quality as with the Pixel 6 Pro. 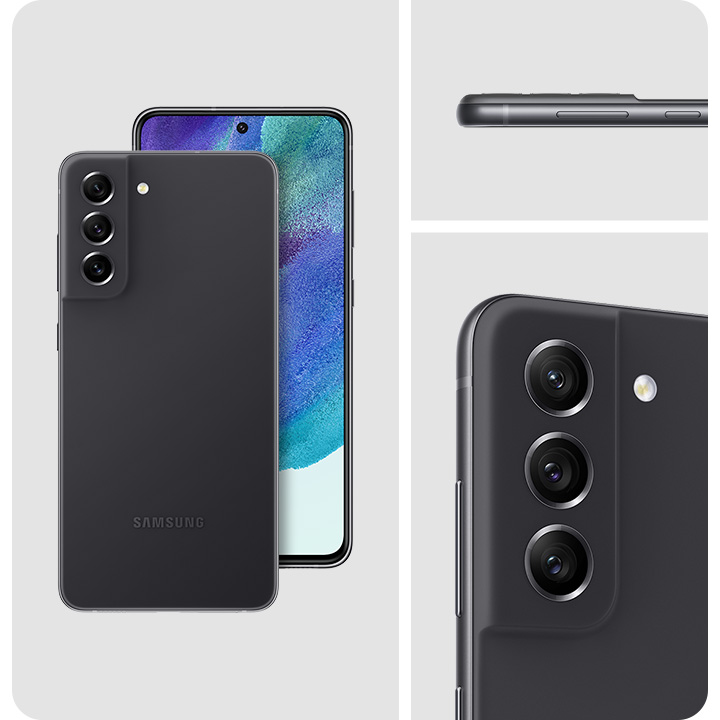 However, it should be remembered that the Pixel 6 only has its wide-angle. Besides that, its ultra-wide-angle lens is much more modest, and its front camera tops out at 8 megapixels. The Galaxy S21 FE has meanwhile an ultra wide-angle of better quality, but also an 8-megapixel telephoto lens allowing a 3x optical “zoom”. He, therefore, offers a priori better versatility. Selfie enthusiasts will also prefer it thanks to its 32-megapixel front sensor. 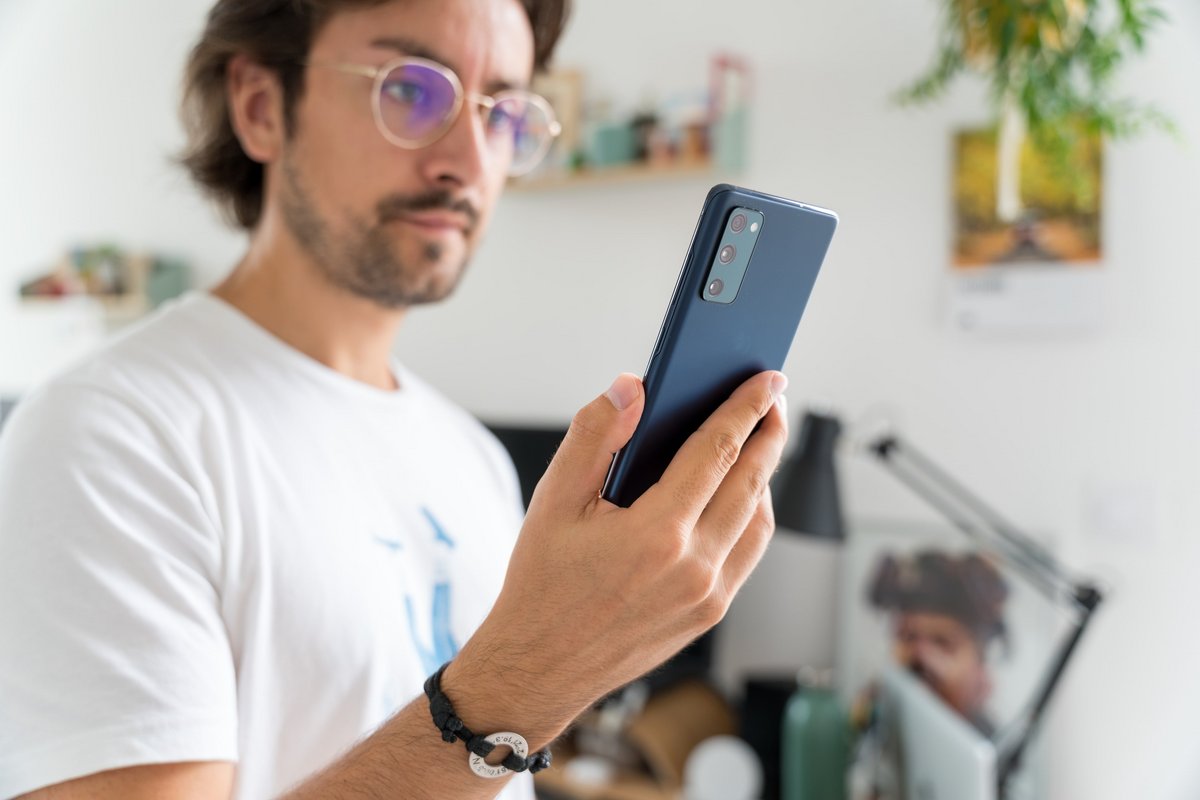 The selfies of the Galaxy S20 FE were already very good, we expect even better from the new model! © Pierre Crochart for Clubic

Judging the performance of the two devices is tricky, in the sense that Google has chosen a custom chip this year: the Google Tensor. In doing so, the builder is stepping aside from pure speed to focus on optimizing the user experience and supporting the many algorithms that make the Google experience the salt.

Opposite, the Galaxy S21 FE has a Snapdragon 888 on board. This high-end SoC, crossed with all the sauces in 2021 on mid-range and high-end smartphones, is very capable in absolutely all the daily tasks and the most demanding games.

Let it be said: it will be difficult to tell the difference between the two smartphones in terms of day-to-day performance. However, it is not impossible that the Galaxy S21 FE will appear smoother in the eyes of future users. For good reason, its screen looks much better. 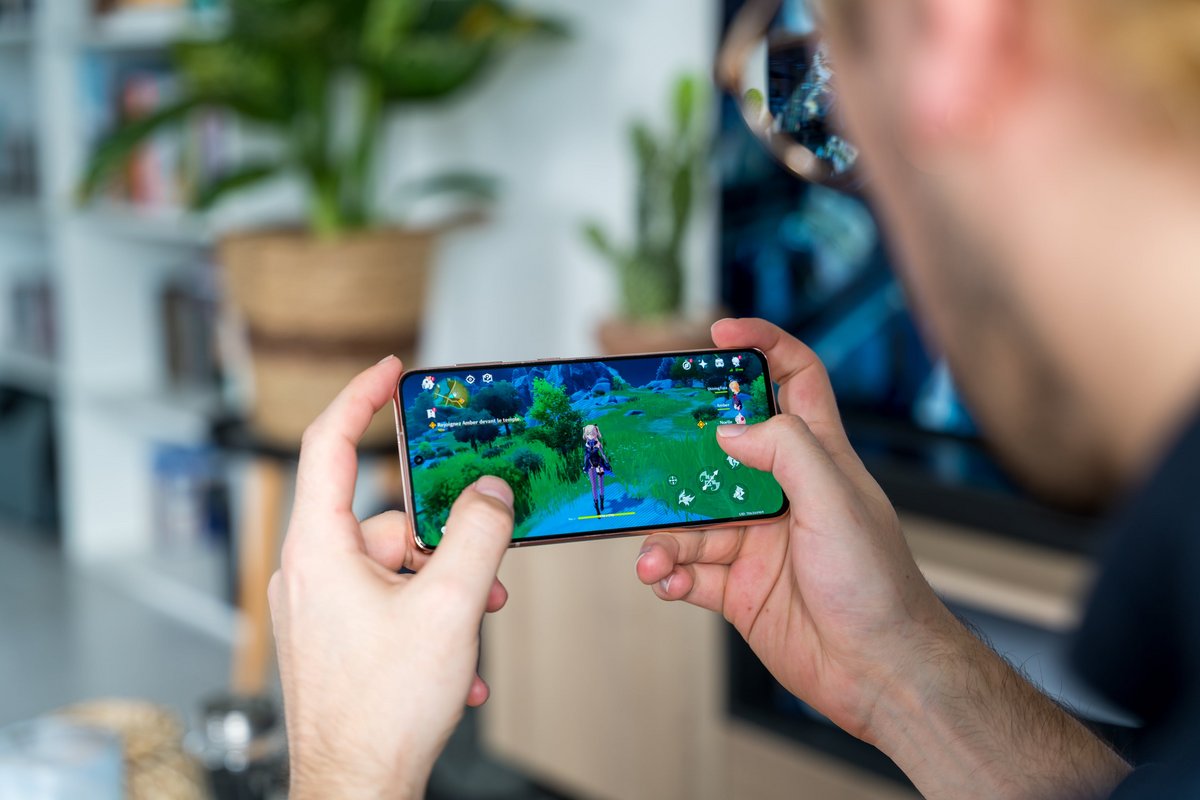 If the two devices enjoy a 6.4-inch AMOLED screen, their characteristics diverge.

The Pixel 6 panel is notably capped at 90 Hz, whereas the Galaxy S21 FE can go up to 120 Hz for even greater fluidity. Another big difference stands between the two devices: the touch sample rate. The screen of the Galaxy S21 FE offers a frequency of 240 Hz, against 144 Hz on the Pixel 6. In other words, the screen of the first scans the movements of your fingers 240 times per second, against 144 times only at Google. This translates into better responsiveness and increased precision in interactions. 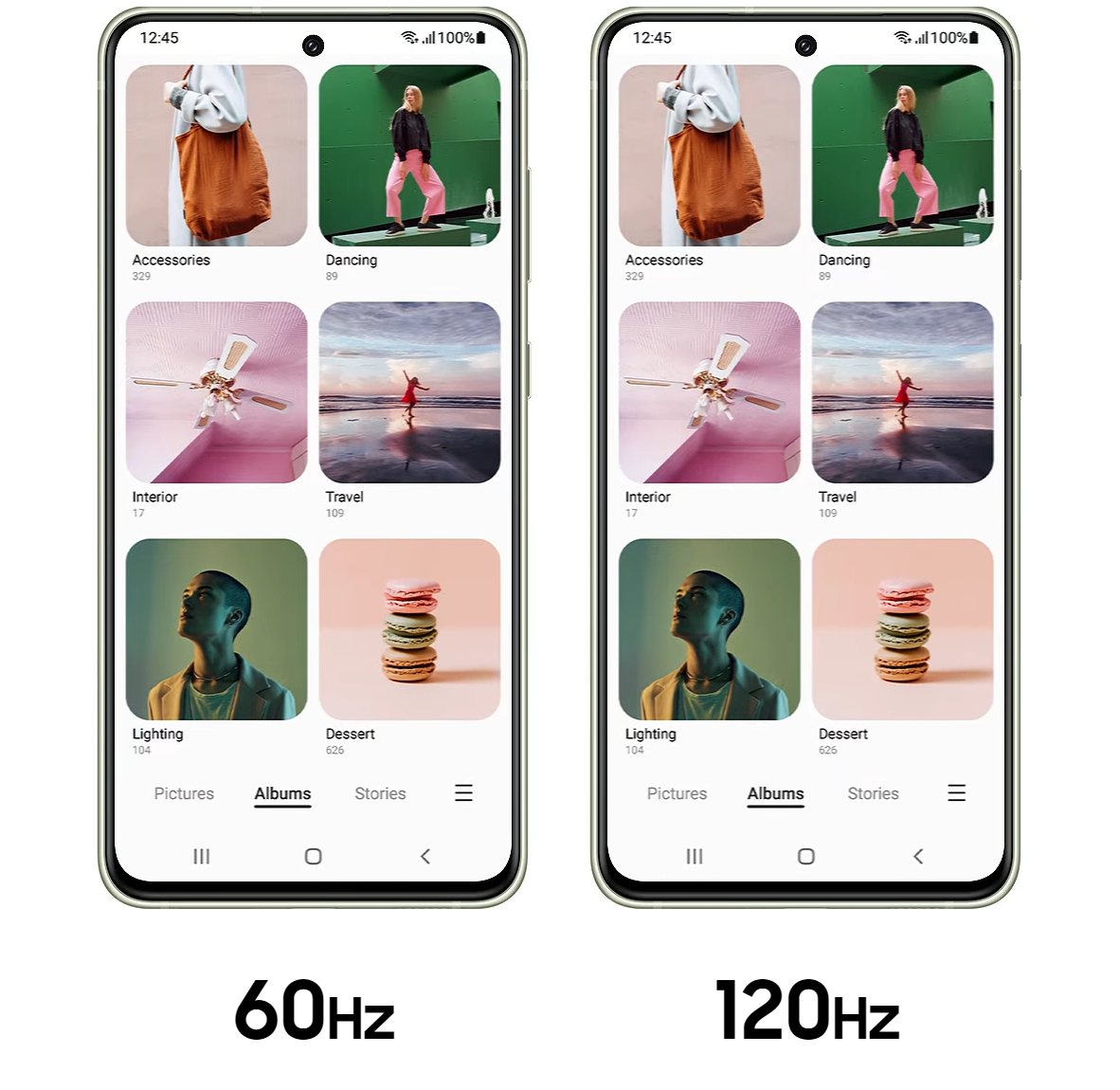 Of course, the calibration and brightness of the Galaxy 21 FE will still have to be evaluated on the job. Based on the results obtained on its predecessor, the advantage would go (slightly) to the Pixel 6. But, again, this kind of detail will ultimately tick only people very accustomed to working on it. ‘picture.

One last point deserves attention in our opinion: the software monitoring of the two devices.

In recent years, manufacturers have redoubled their efforts to offer their smartphones more extensive monitoring. Gone are the days when a smartphone was no longer updated after a year on the market. Samsung now guarantees three years of major updates on its devices, and five years of security updates.

And, although Android is a Google product, the manufacturer does not currently offer better on its Pixel 6. If this is not a detail that is still unclear at the time of this writing, the manufacturer speaks ” at least »Three major updates of Android and therefore suggests that the follow-up could be extended.

In both cases, you should not worry about the obsolescence of your smartphone. Both are also delivered with Android 12 at the controls. But those who want a “pure” Android experience will be more tempted by the Pixel 6. One UI 4, Samsung’s overlay, is not necessarily unanimous among users.

We haven’t gone through all the technical details of the two smartphones to avoid knocking you out. It is also still very difficult to judge the autonomy of a smartphone that we do not have in our hands. However, the battery capacity of the Galaxy S21 FE and Pixel 6 is very close. It is also identical to that of the S20 FE, which offered us a beautiful day and a half of autonomy.

As you can see, it’s still a bit of the same dilemma on mid-range smartphones. Tradeoffs exist, and it’s up to you to know where your cursor is. If you are looking above all for an ultra-smooth and compact smartphone, which allows you to take photos in all situations, you can hardly go wrong with the Galaxy S21 FE.

The Pixel 6 is also an exceptional smartphone. More affordable, it also takes better photos, although it is less versatile. So if you really can’t choose, all that’s left is the good old tossing method.

What do you think about Samsung Galaxy S21 FE vs Google Pixel 6 comparison? Let us know in the comments.

Garmin Venu 2 review: is the most urban of the connected sports watches still in shape?

OnePlus Buds Z2 test: a newcomer that joins the others, without ceremony