The FIFA World Cup in Qatar and Bad Bunny were a trend in the Google search engine in Colombia. (Google)

The FIFA World Cup in Qatar was the most important trend in Google Colombia searches during the last week since November 20, the day the soccer tournament began.

According to the Google Trends tool, which graphically represents the statistics collected by the search engine in different parts of the world, Colombia presents an increase in searches for the Soccer World Cup from 5 in the morning, the time the tournament matches begin. , until approximately 3 in the afternoon, when the last game of the day is already in dispute.

In addition, data was recorded indicating that the Argentina national team jersey is the most searched for by users in Colombia during the last week, which is related to the fact that all of the top 10 search trends are related to the World Cup. 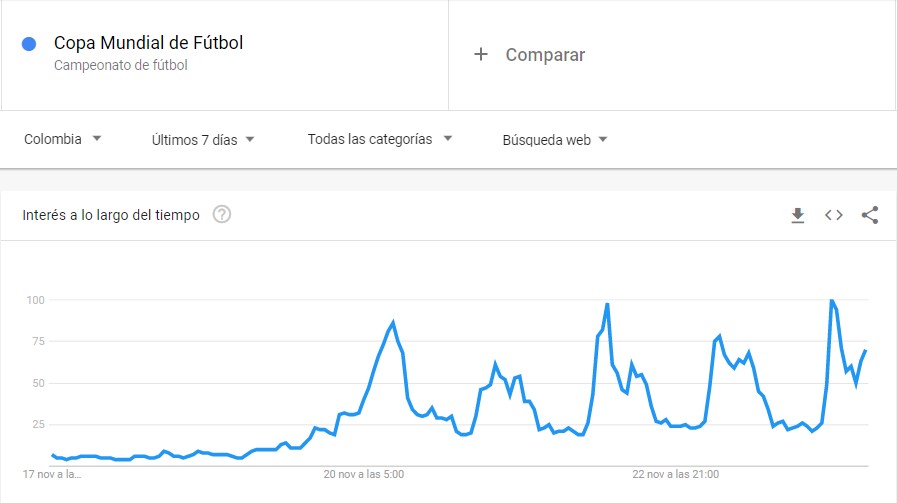 The World Cup was a trend in Google Colombia searches. (Google)
[article_mb_code]

On the other hand, the department that has carried out the most searches related to the tournament organized by FIFA is Cundinamarca, which raised the trend to the maximum peak of 100 points according to Google, indicating a greater interaction with related search terms. The departments of Bogotá (97), Caldas (95), Antioquia (95) and Santander (93) complete the 5 territories in Colombia where the Soccer World Cup is among the preferences of users.

In the case of the most sought-after soccer players in Colombian territory, the two that attracted the greatest amount of attention among users were Lionel Messi and Cristiano Ronaldo, who would be playing the last World Cup of their careers in Qatar. They complete the top 10 players like Karim Benzemá (who will not be able to play due to injury), Neymar, Kylian Mbappé, Sadio Mané (also injured), Enner Valencia, Robert Lewandowski, Gareth Bale and Rodrigo De Paul.

In addition, search terms such as “who is playing tomorrow in the World Cup”, “world matches tomorrow”, “who is playing in the World Cup today” are some of those that have seen increases of up to 4,500% in their searches in recent days. “World Cup 2022 Live Matches” is also a popular search term due to the interest of users to watch the matches for free on the internet.

The World Cup was a trend in Google Colombia searches. (Google)

Colombian singer Maluma had a brief and significant increase in his searches due to his presence at the FIFA World Cup Fan Fest and the interview he left when asked about human rights violations in Qatar during the construction of the tournament stadiums.

However, his popularity in the Google search engine was surpassed during those days by Bad Bunny due to the presence of the Puerto Rican singer in Colombia for his presentations in Medellín and Bogotá on November 18, 19 and 20.

Among the songs most sought after by Colombians during this last week are hits such as Efecto, Ojitos Lindos, Moscow Mule, Andrew, A summer without you, Neverita, Me porto bonito and Yonaguni.

On the other hand, the search on “how much does Bad Bunny charge for a concert?” grew more than 2,900% during this time period, while searches for the time the singer’s performances end increased. “After party Bad Bunny Bogotá” also presented an increase of more than 400% during the last week.

The Realme 10 Pro will hit international waters on December 8