[article_mb_code]
The noise cancellation function, which is already present in the video call platform, Google Meet, will be extended to the Android 13 system and will be called “Clear Calling”. (REUTERS/Andrew Kelly)

The new Android 13 is close to its official launch and, as part of its development process, the beta version of the new operating system received an update that includes, in addition to bug fixes, new features that can reach users and one of them will be noise cancellation during phone calls.

The new Android 13 is close to its official launch and, as part of its development process, the beta of the new operating system received an update that includes, in addition to bug fixes, functions that will be able to reach users.

This feature, which is already present on the video call platform, google-meet will be extended to the Android 13 system and will receive the name of ‘Clear Calling’, although it is not activated automatically and it is not accessible other than through the update code because it is still in the development phase. developing.

According to technology expert Mishaal Rahman, the noise cancellation option is available within the ‘Sounds and vibration’ menu in the device configuration and it will be available for activation, as shown in the image you shared in your account Twitter. 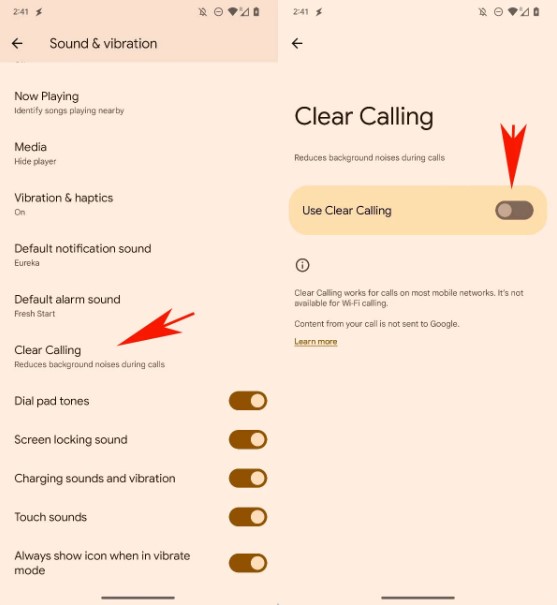 Although this function is within the code of the update, it would only be enabled for calls made in mobile networks. In addition, it is not ruled out that it may be available and activated for use in the next version of Android 13 to which beta users have access.}

It is not yet known whether this feature will be available on Android devices running other older operating systems or what smartphones They may not support this new feature despite being compatible with the new version of Android 13.

Other news that will arrive with Android 13

On the other hand, the Android 13 update will also come with a new feature linked to the most aesthetic aspects of the operation of devices that use this operating system called ‘Material Design.

This feature involves modifying the application icons on the device to maintain the aesthetic harmony of the phone by changing the theme (wallpaper and system colors) of the smartphone. Although this is already available in previous versions of Android, the new update will allow third-party applications to be modified instead of only those that correspond to Google (in the case of Pixel phones) or Samsung. Material Design was released to devices for the first time in 2014 with Android 5.0, it will not be until version 13 of the operating system that applications other than those of the manufacturer brand will change its appearance. (Google)

Among them are WhatsApp, Telegram and Spotify’s reported by the media 9to5google, which are also included in the list of compatible applications:

Signal, Microsoft Edge, Beeper, Opera Browser, American Express, ESPN, Fotmob, LinkedIn, Pinterest, Pocket, and Reddit, among many others. In total, there are around 49 external applications that will have the ability to modify their appearance in the new Android 13 update.

In addition to being able to change the color of application icons, from the moment of its launch, Android 13 will allow setting the language of each app separately instead of having to set the system language for that.

As the day of its launch for all Android users approaches, more details about the features of the operating system will be revealed.

From Kate Hudson's walk with her puppy to Ashton Kutcher's vacations: celebrities in a clickIn addition, Sasha Obama opted for a boho look to attend university and Alessandra Ambrosio celebrated the Bicentennial of the Independence of Brazil

How to find a partner or friends using Google Docs