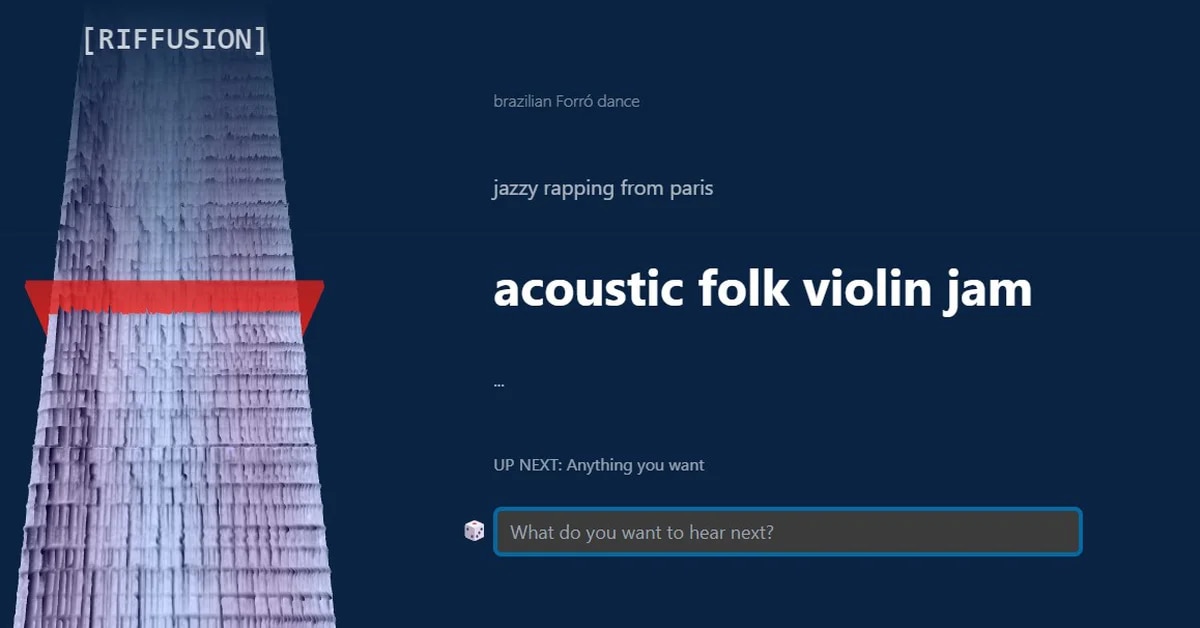 Riffusion is the tool generated by Stable Diffusion and that generates music from text as requested by users. (Capture)

Two developers created a model of software who uses artificial intelligence called Riffusion, which can generate music from the text and with the instruments that the user requests.

Seth Forsgren and Hayk Martiros, the creators of this artificial intelligence which receives its name as a tribute to the AI from Stable Diffusion, they say on the project’s official website that the idea arose initially as a hobby, but it became a reality; it can now be used to generate short music clips that play automatically.

The tool’s web page states that rifusion does not generate music automatically but rather goes through a process that begins with the creation of an image that represents a spectrogram, the visual representation of a sound. Once this image has been created, artificial intelligence translates it into sound.

Spectrogram generated in Riffusion representing a bass rhythm along with a jazzy saxophone solo. (Riffusion)
[article_mb_code]

This development it can’t create large musical patterns, so it plays the same clip multiple times; on many occasions the emitted notes are out of tune and out of rhythm.

A relevant feature is that rifusion it is not only limited to emulating the sound of musical instruments, but can also imitate certain aspects of the human voice. In the event that users request to hear a vocalist, artificial intelligence will be in charge of simulating a voice, but it will not emit sounds intelligible or containing some meaning.

To start, users just have to enter the website riffusion.com and click the red Play button at the top right of the screen where Start listening to the autogenerated music. If you want a particular sound, you can write it (with words in English) in the center bar.

The requested sound will be queued for reproduction and can be heard after a few seconds. However, if users want it to be immediate, they will have to click on the text once it has entered the queue. The spectrogram will be generated immediately and the reproduction it will start automatically.

Another function within tool It appears as a button that is located on the left side of the text bar and that has the shape of a dice. This randomizer generates and inputs a random text that corresponds to a particular sound or music that can be generated by artificial intelligence.

This way random It can be used several times in a row and does not repeat words or phrases consecutively. In the event that users cannot think of a request that they can make to the artificial intelligencethis button can help you get an idea about the sounds that can be generated.

The evolution of sound at home

Listening to music, movies and soap operas can now be done in a more professional way because ecosystems that deliver more enveloping sound are being adapted. According to Logitech, there are tools that are being installed in homes, offices and rest places.

For example, there are devices with more than 14 hours of continuous music on a full charge and you can link 2 speakers to have stereo sound.

Wonderboom 3 is one of the most talked about due to the 360 ​​option for open spaces and outdoor mode that puts the audio louder.