2022 promises to be a particularly active year for AMD both on the side of processors mobiles as models for desktop.

In quick succession, two very interesting pieces of information were published by our colleagues from WCCFTech and Videocardz. Information that further lifts the veil on the (very) next to a new generation of AMD processors.

As a preamble to CES 2022 in Las Vegas, Lisa Su must present a large number of new products. The boss of AMD should in particular highlight the range of Rembrandt APUs that the American firm intends for rather muscular laptops.

WCCFTech is the first to share with us the main technical specifications of this new range that we also know as the Ryzen 6000 series. Of course, there is still a lot to clarify and we trust Lisa Su to do nothing omit next January 4 when it is the keynote.

Our colleagues specify, however, that for the first time, a processor with Zen architecture will be able to climb up to the frequency of 5 GHz. Sacred performance, even if it will overflow the envelope of 45 Watts, without a doubt. This is the frequency of the AMD Ryzen 9 6980HX while the Ryzen 9 6900HX will be a bit slower at 4.9 GHz.

We are talking about 8 hearts / 16 threads in either case and, above all, the use of Zen 3+ cores etched via TSMC’s 6nm process, again a first. A third APU in the series was mentioned by our colleagues, the Ryzen 7 6800H which keeps the same number of cores/threads, but only climbs “to” 4.7 GHz.

For their part, our colleagues from Videocardz were the first to get a photo of this new spearhead of AMD APUs. Photos from an indiscretion linked to a portable video game signed Alienware, the m17 R5.

Visibly “boneless”, the unfortunate laptop unveils the package FP7 used by AMD on its Rembrandt, the same size as the FP6, 25 x 35 mm. Information that allows our colleagues to attempt a small scale comparison and estimate the die of the new APU to around 206 mm², with a fair amount of imprecision all the same. 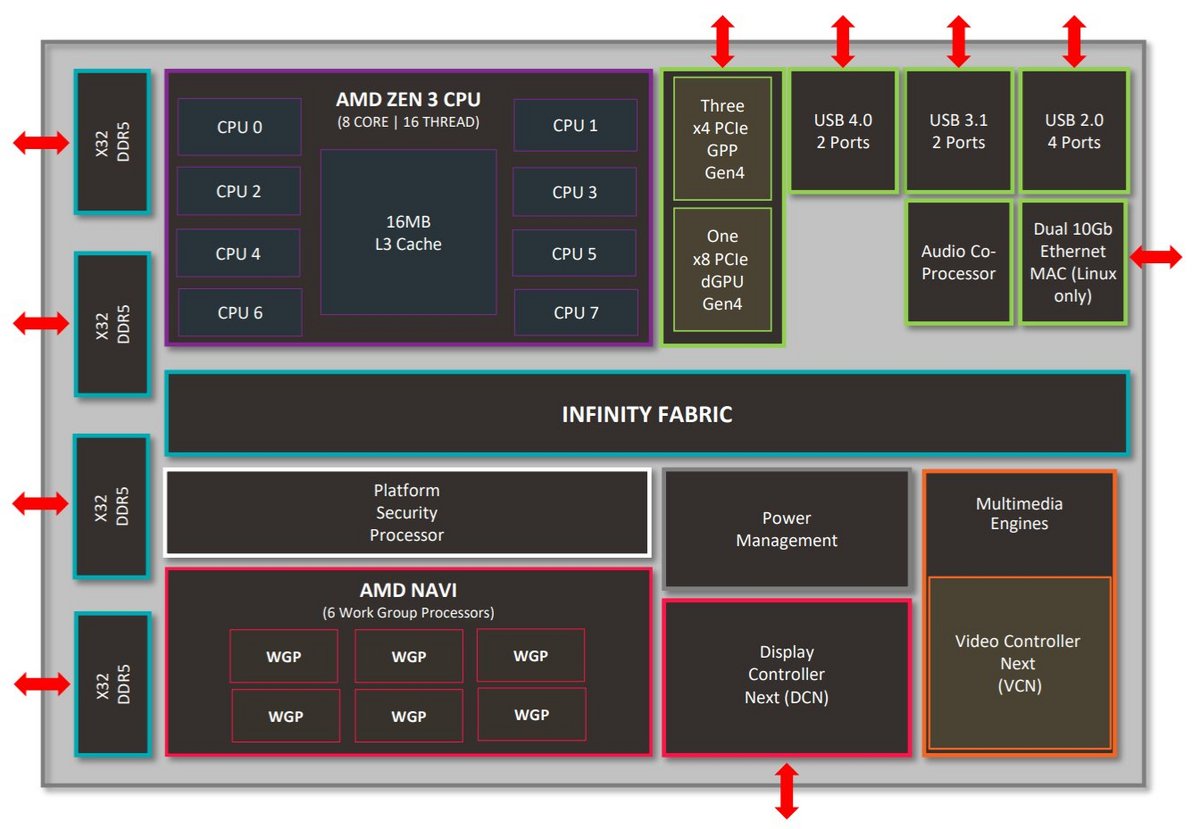 In the process, Videocardz relays the diagram of the Rembrandt APU that the smart guys of ExecutableFix unearthed. A diagram confirming some observations made previously, such as these 8 hearts / 16 threads. It also confirms support for PCIe 4.0 and DDR5.

Towards a Nvidia GeForce RTX 3080 Ti for laptops

Of course, said diagram underlines the use of the latest graphics solution to date at AMD, the RDNA 2. It is the first APU of the group to benefit from it and needless to say that we expect a lot from this Zen 3+ association. / RDNA 2.

Advertisement. Scroll to continue reading.
In this article:new, ryzen