Here’s a good idea: a comedy series set in a public school, from the teachers’ perspective. The premise of Abbott Elementary, which was recognized as one of the best comedy series at the 2022 Emmys, is truly charming, and promises to enrapture the viewer with its script that is both hilarious and very moving.

Abbott Elementaryas the name suggests, is set in a public elementary school in South Philadelphia, which is among the worst rankings education in the country. But the focus here is less on social crises and the sufferings of students outside of school. The motto is to thematize the teachers’ room – that is, what they do when they are not in the classroom and how they deal with the precarious situation of having to teach in the worst possible conditions.

It is not by chance that the protagonist, teacher Janine Teagues, played by comedian Quinta Brunson (who is the creator and showrunner in Abbott Elementary), is an idealist. She represents a typical role of the naive teacher who sees the job as a vocation – which means, in practice, being willing to live a life full of sacrifices, as if she were always chasing her own tail.

Upon arriving at school, the newcomer is already faced with colleagues who will put her convictions in check: the politically correct white Jacob (Chris Perfetti); Barbara, the teacher old school, who is a reference to Janine (and who is brilliantly lived by veteran Sheryl Lee Ralph, Emmy winner in the supporting actress category), Italian mob-connected Melissa (Lisa Ann Walter) and dour surrogate Gregory (Tyler James Williams, the Chris of Everybody hates Chris). Last, but not least, there’s the school’s hilarious crooked headmistress, Ava (played by comedian Janelle James), and a roguish janitor (William Stanford Davis).

Part of the series’ success lies in the perfect casting of this cast. All the roles are well constructed (there is some excessive stereotyping in Melissa’s case, perhaps), and they serve as suitable counterpoints to one another. Janine’s naivete is opposed by Melissa’s cleverness. The seriousness maintained at work by Barbara opposes Eva’s avacalhação, and everything ends up looking like a dance in which no one gets out of the rhythm.

Criticism of the education system

Abbott Elementary is constituted in the very usual style mockumentarysuch as The Office, which gives us a feeling of being in the daily routine of that school. For us Brazilians, it is even curious to see that a school seen as miserable (teachers are always struggling in search of more resources) seems reasonable in our eyes: after all, students even have some complementary classes after school hours.

But that doesn’t detract from the shine or importance of the comment being made here. And the most brilliant part: this happens from a comedy text. There is room for various types of debate, such as the inappetence of the public system (incompetent principal Ava got the position due to blackmail, taking the place of Gregory, who was the most prepared candidate), the participation of parents in the academic performance of students or the lack of updating of older teachers to more technological teaching methods.

Still, I think the most interesting part of Abbott Elementary is that it flees from an idealization of the teacher’s job. There is a concern in the script to bring several layers to the characters, avoiding a harmful heroic approach that is usually given to the category.

Janine, who wants to do everything right, is often confronted with her arrogance; the ultra-competent Barbara, on the other hand, has troubles for being the oldest teacher and refusing to accept the use of technological tools in her work.

Another character that is quite mocked is Jacob, a white guy in a choice that practically only has black students and teachers, and who, naively, ends up embodying the image of the “white savior”.

The subtleties of the script 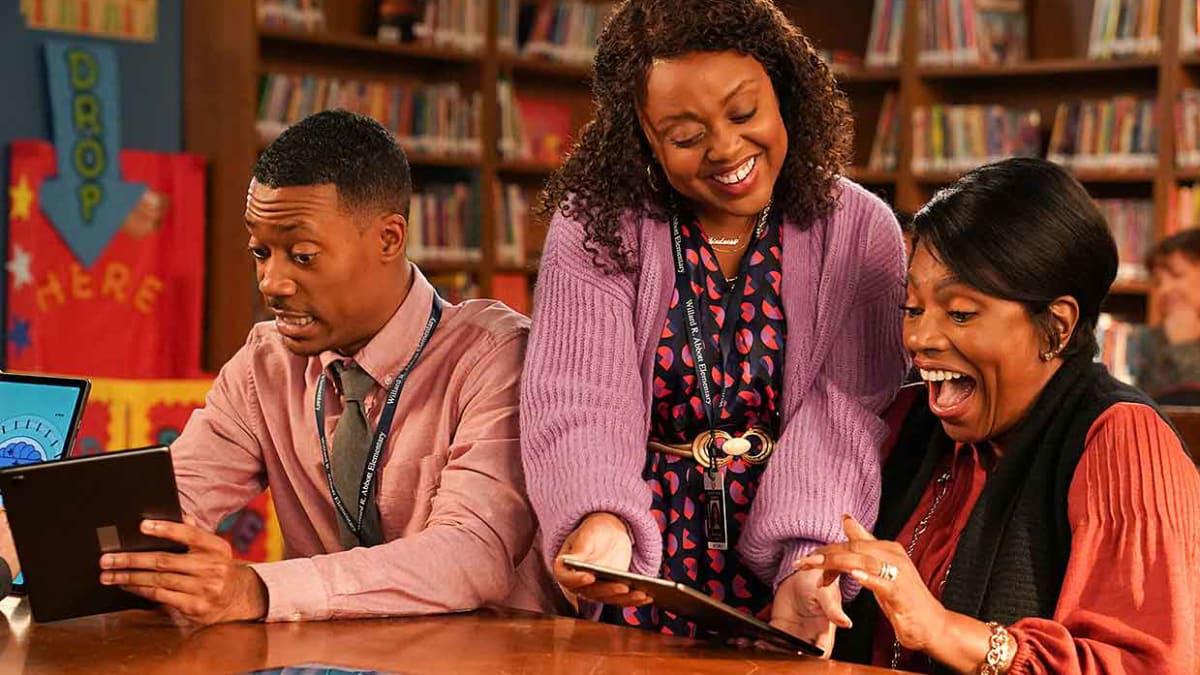 It is quite interesting that Abbott Elementary was celebrated at this year’s Emmys, as this isn’t exactly a groundbreaking series – at least, not on the surface. we’ve seen the style mockumentary become practically beaten, and sitcoms in work environments (see, for example, Modern Family) are increasingly common.

But there is a lot of richness between the lines. The pacing is perfectly suited for a half-hour series, and the ball never drops – the episodes are engaging and keep the “level” of laughs from start to finish. In addition, the script drops some small gems that weave important comments in relation to the public education system – which is, after all, the central theme of Abbott Elementary.

I will cite two examples here. In one of them, Barbara meets a former student who works as a security guard. He is immensely grateful for having been her teacher and for believing that one day he would be someone in life. Excited, Barbara praises the student and sends her mother a hug. At the end of the scene, she turns to Janine and says that she has no idea who he is.

Although comical, the scene breaks the idealization around teachers as saviors, an archetype that is very common in society. In addition, it brings the idea of ​​work overload on teachers and the precariousness of what they face in overcrowded classrooms.

Finally, I mention here one of the best episodes, which is when Janine decides to install a program at school for more advanced children who get bored with the rhythm of their classes. She wants to create “special” classes to encourage these very smart students after school hours. In one of these classes, through Melissa, she obtains chick eggs, so that the children can follow the biological development of life live.

It so happens that when the eggs hatch, they do not appear chicks, but snakes. The result is great confusion. But the show ends after Gregory makes this scathing comment: “When you give some kids chickens, other kids will get snakes. If you get snakes for a long time, you’ll think you only deserve that.”

Even if you are oblivious to the school environment, give this award-winning series a chance. Abbott Elementary will definitely win you over.

These features in IOS 16 require a newer iPhone