Considered a reliable source of information Digital Chat Station published a bunch of rumors via Weibo about OnePlus’ latest top-of-the-line device, which could be presented in China as early as December, but the world premiere will definitely have to wait until the beginning of next year. According to the source, OnePlus’ next flagship phone may have a ceramic body and a metal frame, but the latter is not specified. The sister brand of OnePlus, Oppo, has already done this recently, the Find X5 Pro, which was also sold in Hungary, for example, is made with a ceramic back. What’s more, the OnePlus X was also made of ceramic that year, so this is not a new thing within BBK’s ranks, but several Xiaomi phones can also be cited as an example.

There are several reasons why OnePlus might switch from glass to ceramic. On the one hand, the ceramic creates a premium appearance, which allows the OnePlus 11 to distinguish itself from the many glass-metal-glass competitors. On the other hand, and this is perhaps more important, ceramics have better thermal conductivity than glass, which can be used in the design, extracting more power from the hardware. 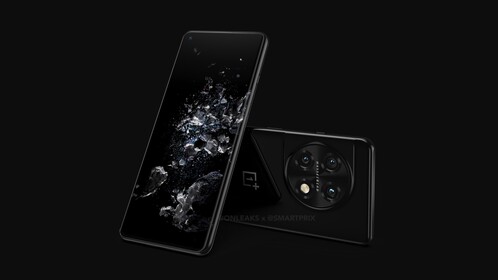 This is what the OnePlus 11 Pro could look like. (source: SmartPrix / OnLeaks) [+]

By the way, the hardware is known from several rumors, and based on the past years, it does not bring anything devilishly new. The OnePlus 11 will be built around the Qualcomm Snapdragon 8 Gen 2 system chip, with 16 GB of operational memory and UFS 4.0 storage, with which it can reach speeds of up to 23.2 Gbps. Regarding the rear cameras, a 50 MP Sony IMX890 sensor is placed behind the main camera, a 48 MP Sony IMX581 for the ultra-wide and also a Sony sensor, IMX709 for the telephoto camera capable of double optical zoom. The selfie camera will watch from a small hole on the front panel from the curved OLED display.