Ever heard of a mobile that could capture a 360º view without any external app? OPPO has manufactured smartphones with the most stylish pop-up cameras till date, ensuring a notch-less screen experience for its users. But it seems like the OPPO wants to go one step farther to build a 360º pop-up camera that could capture the world with a 360º angle.

In the design provided by LetsGoDigital which has been published by World Intellectual Property Office, we can see a notch-less screen, and the camera is hidden inside the pop-up system. The mobile is also free from rare cameras that give this device a remarkable appearance. The only camera provided in the pop-up system will work as a front camera and a rare camera. 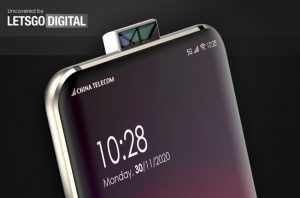 OPPO  can consider several options to operate this camera. The pop-up camera system will operate from the camera app and a button can be provided at the side of the mobile once pressed to open the front camera and by pressing twice, the rare camera will activate.

Xiaomi used light path deflecting mirror technology for the first time, but OPPO moves one step forward and intended to use two mirrors to enhance the photography experience.

OPPO’s 360º pop-up camera system uses 2 light deflecting mirrors placed perpendicular to the camera in the shape of a prism. Because it deflects light, You can make a 360º panorama by moving just 180º because both cameras take part in image processing. You can this feature to take selfies, regular photos, and videos.

The camera itself does not move. The pop-up system moves the camera in and out. When both cameras are not in use, the pop-up system will rest inside the cavity under the screen. The camera is made round from the top to match the round shape of the mobile.

Scream 6: film will be the first of the franchise available...