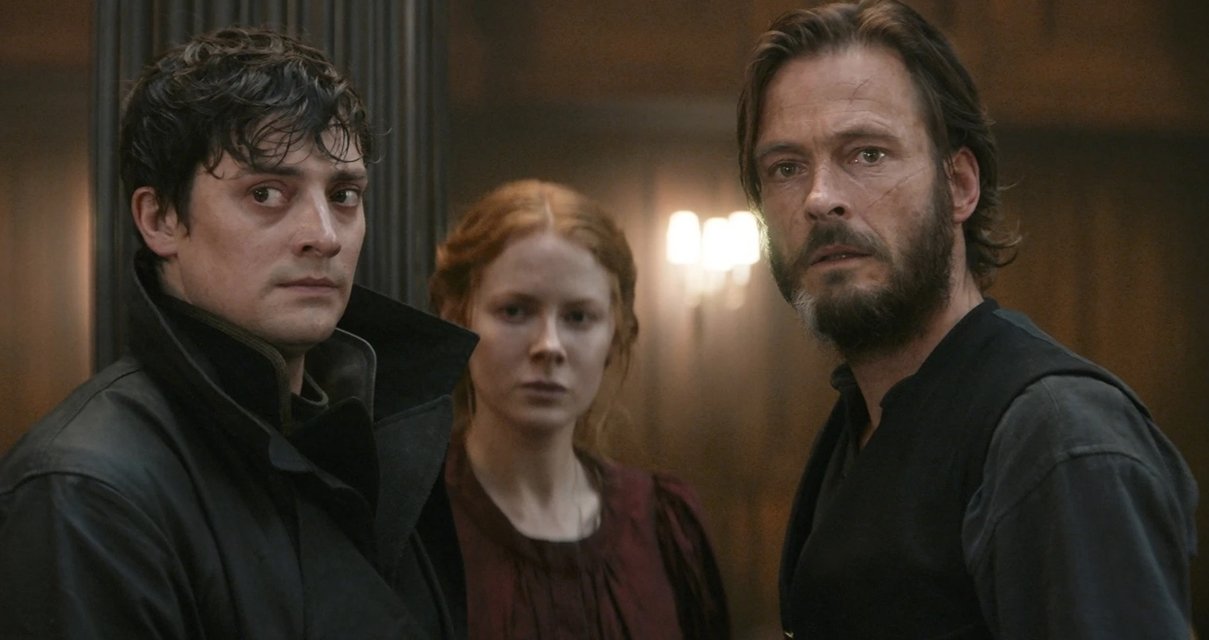 A period series? A horror production? Science fiction? Drama? Or all that and more? The fact is: define 1899new Netflix series, is a very complicated task.

The narrative explores elements such as ghost ships, memories, brain trips, Plato’s Myth of the Cave, trauma and so on. Which might seem a bit confusing at first.

Yet, somehow, 1899 manages to weave all of this into a very interesting and intriguing narrative, which, almost always, presents you with more questions than answers. At least at first.

And it’s hard to expect anything different if we consider that the creators of 1899 are Baran bo Odar and Jantje Friese, the German duo responsible for nothing more, nothing less than the series dark (2017).

As you may remember, dark offered a work that was more like a puzzle than a story. And only in the final episodes was it possible to get a sense of the full picture and understand all the narrative ideas.

In that regard, 1899 goes down this path a lot and manages to create a new puzzle for viewers to unravel (or try, at least).

But is it worth watching? 1899 really or is the series just a lot of hype for low quality? The time has come to answer these and other questions with a complete narrative and critical analysis of 1899from Netflix!

1899 is a Netflix original series that was released on November 17 of this year. As already mentioned, the production is authored by Baran bo Odar and Jantje Friese, creators of dark🇧🇷

Regarding the plot, I will stick to the bare minimum so as not to spoil any surprises. And I already take the opportunity to reiterate that, in this part of the text, there are no spoilers. So, you can go without fear, ok?

Very good, 1899 tells the story of several European passengers who board the Kerberos ship bound for New York. And they are passengers from many different places, such as Germany, Portugal, Spain, France and so on. A real mix of cultures, languages ​​and customs.

Until then, everything is fine. However, the journey, apparently peaceful, changes from the moment the Kerberos crew receives signals from another ship. It’s the Prometheus, a vessel that had been missing for some time and that everyone believed had sunk.

Behold, part of the people of Kerberos decide to go to Prometheus, which is all destroyed and abandoned in the middle of the sea. Or rather, almost abandoned. That’s because a single passenger is discovered at the scene: a mysterious boy.

The said boy is then taken into Kerberos. And it is from this point on in the narrative that very strange and suspicious things begin to happen to all passengers, including visions, nightmares, among other bizarre things. Which only proves one thing: there is much more than meets the eye in this whole story.

The mysteries of 1899 intensify with each passing episode, making the narrative intriguing from start to finish.Source: Netflix

WARNING: SPOILERS ALERT! FROM NOW ON, IF YOU HAVEN’T WATCHED 1899, DO NOT CONTINUE READING!

Narrative and Critical Analysis of 1899 (WITH SPOILERS)

No wonder, 1899 takes place in the middle of a journey, because the narrative is exactly that: a great journey. The difference is that, while we are led to believe that it is just a physical journey, the plot shows us, little by little, that the journey in question is mental.

The ship, New York, everything is nothing more than mere details in a much denser plot than one imagines at first.

AND 1899 it succeeds in unfolding its mysteries and details slowly. Like this dark, the series is what we call a “slow burner” (a rhythmic story, which burns slowly until it reveals its true face). For this reason, it may be that some viewers get impatient, as the plot offers us more questions than answers until its final episodes.

The first half of the series, by the way, is much more concerned with acclimatizing the viewer and introducing its characters than diving headlong into its secrets. Something that proves to be necessary, given the large number of characters in 1899🇧🇷

In the first four, five episodes, therefore, we have several flashbacks and explanations about the origins of the characters. And one thing is already clear at this point in the championship: everyone has traumas and is running away from unpleasant pasts. Which leads us to believe that they are not on the ship by simple chance.

It is from the fifth episode, however, that the narrative begins to accelerate and “reward” the viewer after raising several far-fetched questions. In the final stretch of the work, we managed to distance ourselves further and further from the puzzle to have a complete view of the image.

In this part, we finally understand that Maura (Beecham) is the wife of Daniel (Bernanrd) and the mother of the boy without identity. We are also already aware that, really, Kerberos passengers are not there randomly and everything seems to have been orchestrated to happen that way.

The truth is that whatever is going on in 1899 is nothing more than a simulation. An illusion created by Maura herself as a way to be close to her son and her husband. However, she cannot accurately remember the details of her life, as the simulation brings together a tangle of constructions, traumas and memories.

In this sense, the series itself reminds us of Plato’s Myth of the Cave, a text in which we are challenged to question ourselves about what is real. Could it be that what we are seeing is just a layer and reality is beyond the surface? Was God responsible for everything, or did someone also create God?

It is these intriguing ideas that 1899 tries (and manages) to work, showing that Maura created her own reality and connected all the characters in the plot in a great simulation, which generates infinite loopings, which are restarted every time they die and which will continue happening until Maura wakes up and end the chaos.

And the role of waking Maura up so that everyone is free of the situation falls to her husband, who, despite having failed several times during the loopings, manages to “hack” the simulation, leading Maura to wake up in another layer of the illusion, which, finally, , takes her to the “real world”.

But, guess what? Maura wakes up in a spaceship, in 2099, 200 years in the future. She comes out of a kind of hibernation chamber, in which the other passengers seen in Kerberos are also, and discovers that her brother is in control of everything.

Would we be in yet another layer of simulation or would that be reality? Only the 2nd season of 1899 you can answer us. 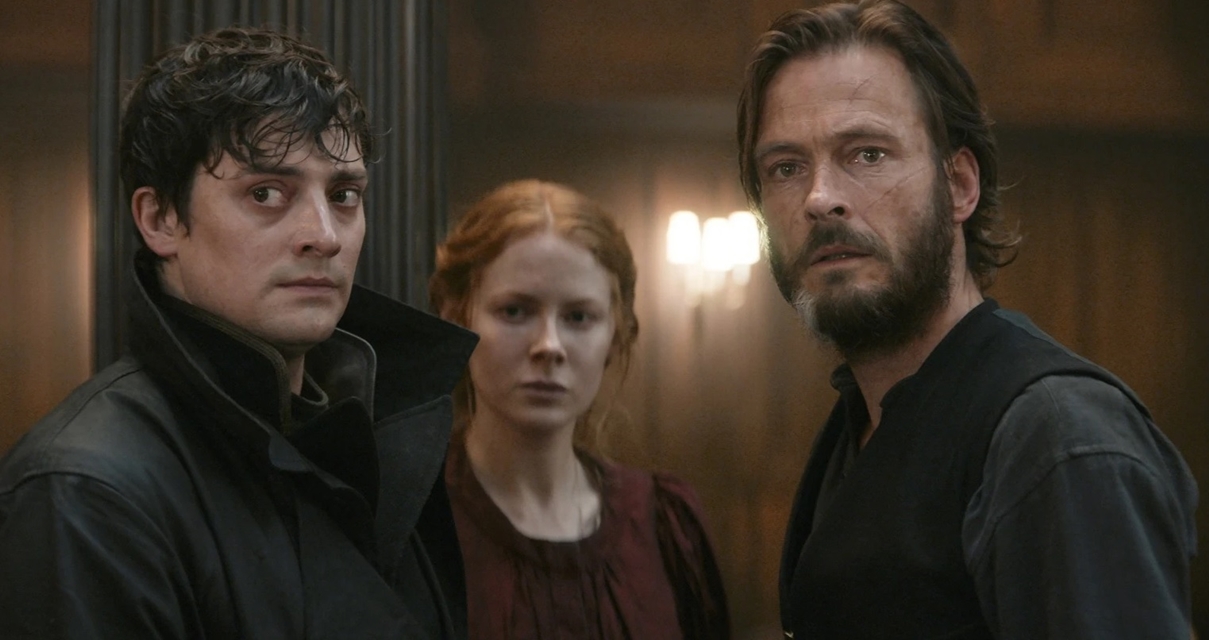 1899 works on very interesting concepts, including Plato’s Myth of the Cave.Source: Netflix

if you already watched matrix and liked, 1899 It’s a great choice, as it works with very similar ideas, involving different realities, simulations, relationships between creator and offspring, etc. The difference is that 1899 works with this in a more intimate way, betting on the dramas of the protagonist and her characters as a starting point, instead of something more general (a war or revolution, in the case of matrix🇧🇷

Although it seems a little confusing, the narrative of 1899 it is very interesting, but it requires a little patience from the viewer, who needs to be willing to put together a long puzzle, which is only ready, in fact, in the final episode (if we do not consider the hook for the 2nd season, of course).

The care with the narrative arcs of the characters is also commendable, since it is not easy to empathize with such a vast and different cast. But the production did a good job in that sense, bringing us closer to its main figures, as well as their traumas and problems.

Finally, 1899 it’s a pretty cool experience and lives up to the previous work of its creators, darkcontinuing the dark aesthetic and complex narrative cultivated by the German duo.

The question that remains, however, is: is this text real or a mere simulation of an alien mind? Place your bets.